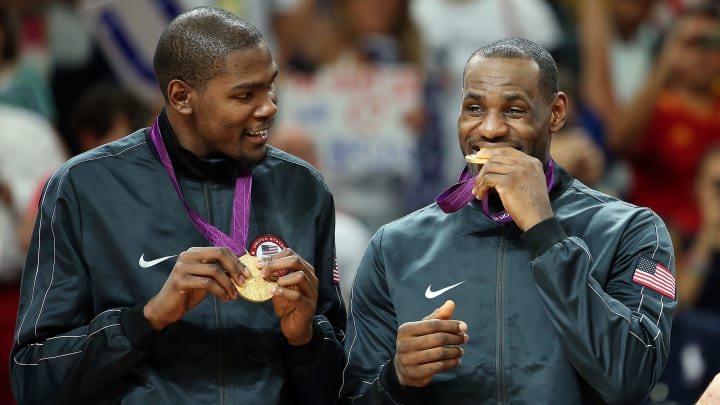 Kevin Durant He was the main figure of Team USA at the Tokyo 2020 Olympic Games, in which his team won the gold medal.

For many analysts, Durant is currently considered the best player in the NBA, leading immediately to compare him with Lebron James, who has served as the face of the league in recent years.

Thus, we compare the performance, achievements and statistics of both players at the international level with the United States team.

Durant debuted with the national team in 2008, participated in the World Cup in Turkey in 2010 winning the championship and receiving the MVP of the tournament. He was also part of the ideal quintet.

The forward has 3 gold medals in the London 2012 Olympics, Rio de Janeiro 2016 and Tokyo 2020. In his career in universal dating, Olympian Durant has 45 games, accumulates 860 points with 242 rebounds, 112 assists, and 57 steals, according to the official website of the United States basketball team.

As for James, the 2004 Athens Olympic Games premiered with his team, where he won the bronze medal, being the first time that the United States did not obtain gold in the world event since they began to bring players from the NBA.

LeBron returned to hang the bronze medal in the 2006 World Cup in Japan. However, for 2007 he participated in the Tournament of the Americas in Las Vegas in which he finally enjoyed a triumph with the national team.

It wasn’t until the 2008 Beijing Olympics that the soccer player Los angeles lakers he got his first gold medal after beating Spain in the final. A feat that he repeated in London 2012 by defeating the Spanish team in the final to end their international participation.

In total, James registered with the national team, 88 assists, 24 games played, 273 points, 95 rebounds and 36 steals, statistics in which he is among the three best in history, according to statistics from the Team USA website.

In conclusion, based on international performances, Kevin Durant has outperformed LeBron James with three gold medals standing out.