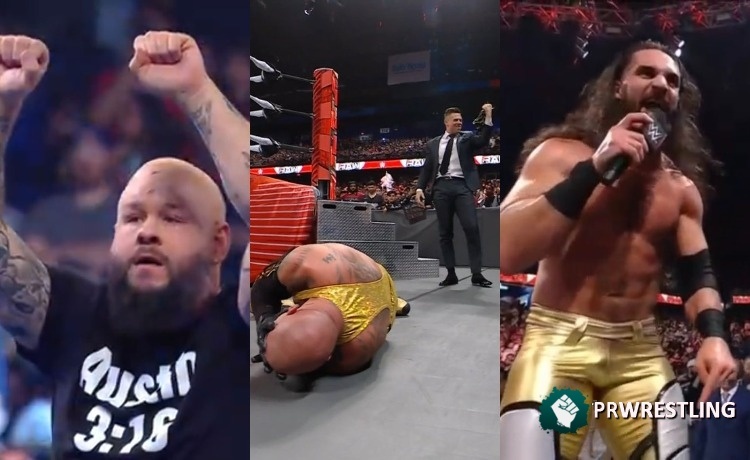 Stone Cold Steve Austin’s song plays and everyone in the crowd was fooled. It was Kevin Owens in an Austin 3:16 jersey, jean shorts, knee pads, and an ill-fitting bald spot.


Owens acted like he was Austin, ordering beers but missing every one thrown at him. Owens blamed someone on the WWE team for throwing them wrong, so Owens gave him a Stunner.

After the match, Ziggler super kicked Dominik while Miz gave Rey a Skull Crushing Finale. Miz abruptly ripped off Rey’s mask and she covered her face until Dominik got her a towel to cover it.

Miz was on the phone with Maryse, bragging about having removed Rey’s mask. Miz challenged Logan Paul to wear the mask on Raw next week.

Omos then challenged someone to get close to him on Raw or at WrestleMania, but no matter who it was, he would be overpowered.

AJ Styles exits. She wasn’t here for answers, she was here to kick Edge’s teeth down his throat. The music of Rollins plays, who suggested that Styles go home, hug his wife and children, recover fully and return after WrestleMania while he measures Edge.

Pearce and Deville walk out and announce that if Rollins can beat Styles tonight, he would replace him at WrestleMania.

After the match, Zelina attacked Ripley from behind with a kendo stick. Carmella pushed Natalya onto the steel steps before taking out Baszler with a superkick.

Carmella and Zelina provoked another confrontation but hugged each other and smiled.

becky lynch walks out and says that when she returned the crowd had chosen Bianca Belair over her and that’s when she knew she would sell her soul for the title.

Lynch came here to remove Belair’s hair, but Belair wasn’t here tonight. Belair couldn’t risk losing his soul, but Lynch already sold hers. Lynch would show Belair what he could win at WrestleMania, if Belair can pull it off.

Veer Mahaan will arrive on Raw on April 4 (really)

After the match Otis knocked Orton down onto the barricade. He went to give Riddle a Vader bomb, but Street Profits come to the rescue.
Dana Brooke and Reggie defeated Tamina and Akira Tozawa

AJ Styles defeated Seth Rollins via DQ as Styles set up for the Phenomenal Forearm, but Edge hit him from behind with a chair for the disqualification.

Rollins pleaded with the referee, but Styles was declared the winner by DQ, meaning Styles will face Edge at WrestleMania.

Rollins in anger grabbed a microphone and said: “This is s**t!” repeatedly to end the show.