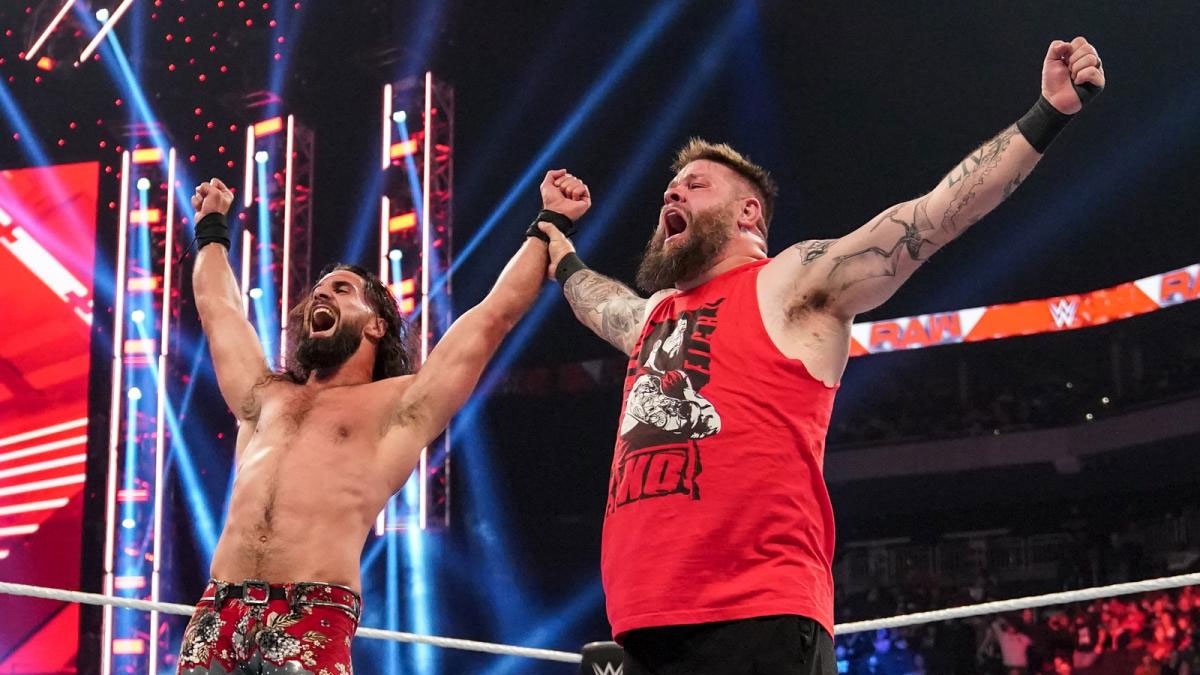 MVP and Bobby Lashley They open the show after a review of The All Mighty’s three wins last week. MVP highlights everything Lashley needed to achieve something that seemed impossible, and tries to explain it in a way that people understand with references to other sports.

Big E comes out to interrupt Lashley and MVP. And remember that MVP intervened in his match against Lashley, so he thought that maybe Bobby did not have the guts that he believed. Bobby responds that he could defeat him anyway at any time. Bobby tells MVP that he didn’t need their help to beat Seth Rollins, Kevin Owens or “Little” E. “I’m not a saint, if I see him hit your knee, I’ll break you with a Spear and take the victory” says Bobby. Lashley proposes an idea: that MVP face Big E, so that he proves that he can really beat him. Bobby leaves the ring and leaves MVP before E.

Kevin Owens and Seth Rollins attack Bobby Lashley! They both come out of nowhere and surprise The All Mighty from behind. Big E comes out for them but they throw him hard against the barricade. Big E responds in the ring and Lashley finishes off Rollins.

Bianca belair ensures that this latest match with Doudrop will end once again with her as the winner.

Kevin Owens he argues with Seth Rollins backstage until they are interrupted by Adam Pearce and Sonya Deville. They confirm a match for tonight: Kevin Owens & Seth Rollins vs. Bobby Lashley & Big E.

Doudrop vs. Bianca belair
BIanca tries to surprise with a KOD at the beginning of the match. Doudrop goes on the attack when he returns to the ring, Bianca dodges her with agility and connects a Dropkick, Doudrop catches Bianca in mid-flight and applies a Body Slam for the count of two. Belair avoids a Senton and looks for a Moonsault, Doudrop receives her with his knees. The action goes to ringside, where Bianca applies a Spinebuster. Returning from commercials, they struggle in the heights. Doudrop resists and throws herself seated but Bianca dodges her. Cannonball to Bianca for a count of two. Doudrop is confident in his moment of victory, picking on Bianca and slapping her. Belair is enraged and returns to the attack. Bianca’s Crossbody and Moonsault, but it’s not enough. Sit Out Powerbomb for Bianca, Doudrop then looks for height but Belair dodges it again. KOD to Doudrop!
Winner: Bianca Belair.

Austin Theory is interviewed backstage. He says that Vince McMahon surely sees him as the future WWE Champion and runs off screaming.

Austin Theory vs. Finn balor
Theory takes the initiative of the combat, controlling Finn with his aggressiveness. Balor responds with a Dropkick and pulls Theory out of the ring. He tries to kick it but Austin stops him to apply a Neckbreaker from the edge of the ring. Finn returns to the attack with the Slingblade upon returning from the hiatus. Austin responds with a big Dropkick and knocks Finn into a corner. Balor looks for height but Austin stops him with a Spanish Fly. They exchange pins that almost reach three, Balor escapes from Austin and leaves him at the mercy of his shot. Coup de Grace and a count of three about Austin.
Winner: Finn Balor.

AJ Styles talk to We hear backstage. AJ tries to motivate him for his next fight, Omos is not very excited.

The Miz He opens his Miz TV segment by saying that he loves Maryse and asking that he not talk about their relationship on Cutting Edge later. Miz gets between AJ and Omos, seeking to increase the tension between them. Finally Miz says that Omos confessed to him that he is tired of carrying AJ and the respect between them is one-sided. “WWE begged Omos to sign a contract. He’s not the next Andre the Giant, he’s the first Omos,” says Miz. AJ gets tired and says they shouldn’t have come to the show. Styles asks Omos if this is really what’s up. When Omos is about to speak, he is interrupted.

AJ Styles walks up to Omos and yells at him that he’s rubbish. Omos pushes AJ, Styles becomes enraged and charges at him. He looks for the Phenomenal Forearm but Omos catches it and smashes it against the canvas. “The next time you see me, it will be in a fight. Against you!”, Closes Omos before leaving.

Austin Theory is going to hit Vince McMahon’s office, but he regrets it and leaves.

Randy Orton vs. Chad Gable (c / Otis)
Good start for Chad, dominating Randy with his technique. Arm Drags for Orton, who remains under Gable’s dominance. Orton manages to free himself and pulls Chad out of the ring. Gable looks for another Arm Drag but Randy dodges it and surprises with an RKO.
Winner: Randy Orton.

Otis enters the ring, Orton unsuccessfully searches for an RKO on him and ends up running away from Otis.

MVP talks to Bobby Lashley. Lashley says he’ll kick Rollins and Owens’s butt. MVP asks him if what he did was cheating for Big E or if he was really going to leave him at his mercy. Lashley tells him that he is thirsty, if he can get him some water, avoiding the answer.

Damian Priest vs. Dolph Ziggler (w / Robert Roode)
Priest dominates at the start, Dolph reverses a Powerbomb with a pin attempt. Damian kicks it hard and then slams it against the canvas. Priest looks for height but Ziggler stops him with a Superplex. After the break, Dolph applies a Tornado DDT for the count of two. Ziggler avoids a Broken Arrow but receives a hard Clothesline. Roode distracts Priest from ringside, causing Priest to face him and rage at him. Damian receives a count of ten for arguing with Roode and loses the match.
Winner: Dolph Ziggler.

Dolph Ziggler gets a shot at the United States Championship.

Finn Bálor is interviewed in backstage. When he is talking about his victory against Austin Theory, he appears to attack him from behind. Austin talks to FInn and has a selfie next to him after the attack.

Austin Theory meets with Vince McMahon, who was looking for him. Vince says he likes what Austin has done but still lost the match, Vince confirms to Austin that he will have a rematch against Balor next week.

Edge presents Maryse to be part of its segment, The Cuttting Edge. Edge criticizes Miz and tries to get Maryse to speak ill of her, but she claims that she did not accept the invitation to the show to express herself. Maryse begins to say how difficult her life is, and asks Edge if he would do to his wife the same thing that Miz did. Edge doesn’t believe anything and asks Miz to come out to face him. Miz tries to attack him from behind and takes control of the situation until Maryse attacks him. Miz connects the Skull Crushing FInale and laughs alongside Maryse to close the segment.

Rhea Ripley vs. Queen zelina
Carmella and Nikki ASH can’t be in ringside during combat. Rhea takes the initiative and overpowers Zelina, who responds with a Stunner. Rhea’s Big Boot to stop Zelina, who soon receives the Riptide for the count of three.
Winner: Rhea Ripley.

Big E & Bobby Lashley vs. Kevin Owens & Seth Rollins
Bobby and E take control of the match in and out of the ring at the start. Bobby chases Seth into ringside and smashes him into the barricade. Back in the ring, Seth receives a Vertical Suplex in which Lashley holds him in the air for several seconds, demonstrating his power. Seth escapes and knocks Lashley out of the ring. KO attacks him there right away. Back in the ring, Double Suplex to Bobby for a count of two. BIg E takes over, connects a Clotheslien to Seth and dominates KO after a URanage. E is again distracted by Seth and receives a KO Superkick. Rollins’ Frog Splash, but it’s not enough.
Lashley lashes out to take control with ease after the hiatus. Lashley mistakenly connects a Spear to Big E. KO and Seth take advantage of the situation to punish both opponents with the metal steps at ringside. Curb Stomp Lashley on the step!