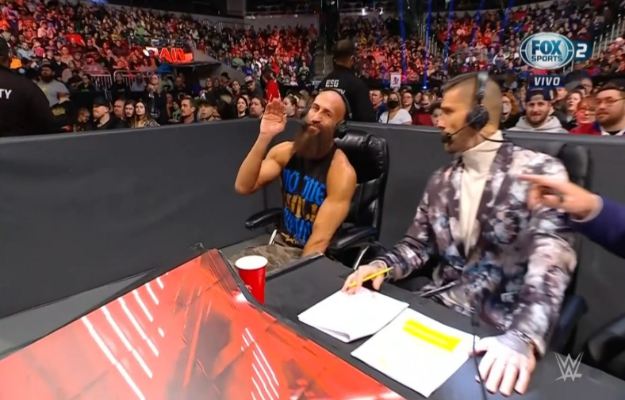 During the action of the WWE red mark raw, the superstar of NXT 2.0 Tommaso Ciampa visit the show to witness a fight, here the fighter would be involved with whom Ciampa had an altercation on Tuesday of last week in the multicolor mark.

Fight between The Street Profits vs. The Dirty Dogs

During the action of Monday Night RAW we had a fight between The Street Profits vs The Dirty Dogs, in the middle of he reviewed what happened in the multicolored brand of NXT 2.0 when during a contract signing, the super star Dolph Ziggler came to face the champion bron breakker and incidentally shared words with the super star Tommaso Ciampa.

At the beginning of the fight, the surprise of many was to see Tommaso Ciampa sitting at the comment table, the former champion was only watching the fight keeping a close eye on Dolph Ziggler, at one point he leaves the ring and threatens Ciampa with a super kick and he responds by giving him a glass of water.

Things get out of control between the competitors

The fight continues and Robert Roode is left alone at the mercy of Angelo Dawkins and Montez Ford so both easily connect to take the victory, after the result now yes Ziggler kicks Ciampa and runs away from the threat, possibly we will see more of this the next NXT or RAW show, at the moment it is uncertain where this story points.