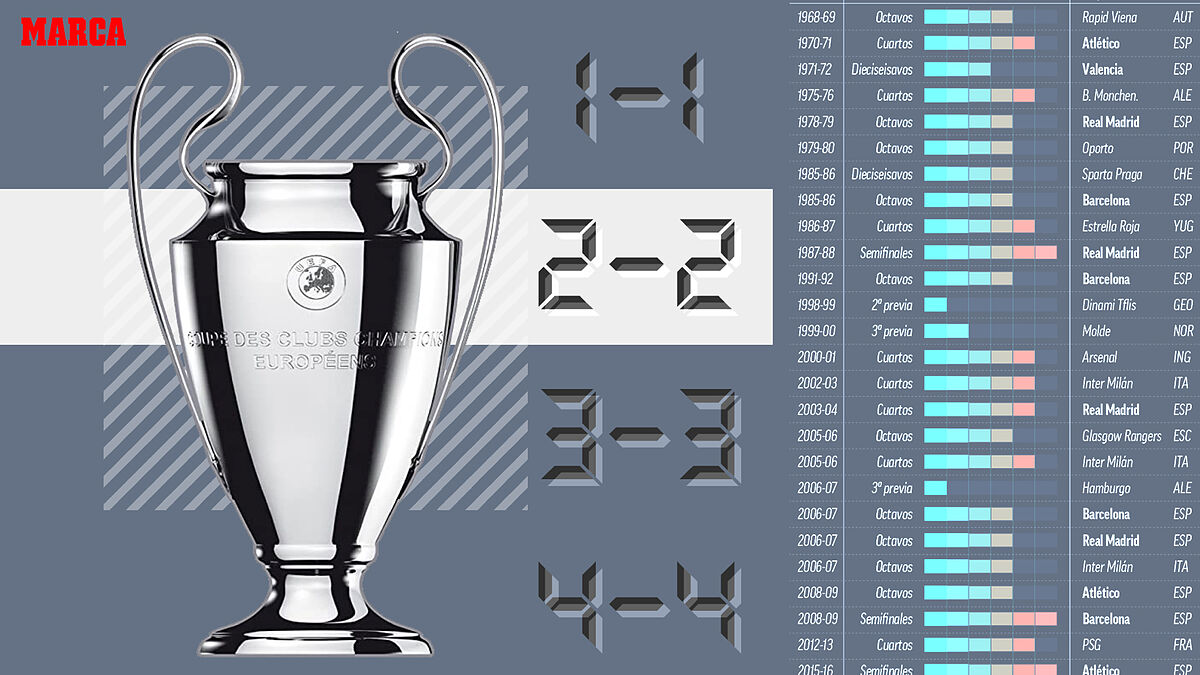 “You have to score a goal in the first leg away from home no matter what.” That phrase, so popular among fans and players in European competitions for more than half a century, no longer makes sense as of this Tuesday, when the knockout stages of the Champions League begin. UEFA abolished in June last year the rule that rewarded goals scored in the opposite field. The new rule came into force in this season’s group stage, so in the event of a final tie, those away goals would no longer be valid to determine the classification. But obviously it is in the two-legged qualifiers that it will have to be taken into account. From this Tuesday, with the matches PSG-Real Madrid and Sporting Portugal-Manchester Cityit must be clear that in the event of a tie in the computation of the two games, extra time will always go to, regardless if one has scored more goals away from home than his rival.

The UEFA established the rule of the double value of the goals in the opposite field in the 65-66 season but only for the Recopa. In October 1967, the Valur islands was the first team that benefited from that rule in what was then called the European Cup. They drew 1-1 at home against Jeunesse d’Esch, but the 3-3 draw in Luxembourg saw them through to the next round.

Since then, it has been applied until the semifinals of last season. Scoring a goal in the opposite field in the first leg was a real treasure, almost synonymous with having half a classification in your pocket. In the same way, the teams that played first in their stadium had almost as their first objective not to fit in. A 0-0 was considered a more than decent result for the second leg, knowing that any tie with goals would give you the pass.

In the eye of the hurricane

However, over the years, the norm has always been in the eye of the hurricane. Simeone, Tuchel or Ancelotti, to give a few examples, always confessed their opponents and asked for a review of the rule, especially in the event of an extension.since according to them it became obsolete with the evolution of football and harmed the teams that play in their stadium the return leg.

Diego Simeon has always been one of the most active in enacting the rule change. His main reproach was the double value in overtime. During his visit to the King Power Satadium in April 2017 for the dispute of the second leg of the quarterfinals of the Champions before him leicester citythe Argentine criticized the UEFA rule. “I don’t understand why the team that plays the second game away has or can have 30 minutes more than the other to score a goal that is worth twice as much. Sometimes it has happened to us, like now, and a goal in a tie worth a lot”, He said. A year later, in September 2018, Nyom hosted the coaches’ meeting prior to the start of that edition of the Champions League. There, technicians like Lopetegui, Ancelotti, Rafa Bentez and Simeone himself insisted on abolishing that rule.

UEFA was compiling data and statements from each other, and at its June 2021 meeting, decided that from this season it would be removed from its competitions. Those, “without unanimity”as recognized by President Aleksander Ceferin.

Statistics, according to UEFA, also pushed to take this measure. In his statement after the resolution, he explained that the incidence between playing at home and away has been decreasing since the mid-1970s and, therefore, it was no longer necessary to prioritize visiting goals. UEFA detailed how the difference between the number of local and foreign victories has decreased significantly in this period. If four decades ago the percentage was 61%-19% in favor of home wins, now it is set at 47%-30%. And the same has happened with the number of goals in the men’s tournaments. At the beginning of this period, the correlation was an average of 2.02 goals scored in their own half and 0.95 as visitors, while at the moment it is between 1.58 and 1.15.

Ceferin argue the change: “The impact of the rule was contrary to its original purpose, as it discouraged home teams, especially in the first leg, from attacking because they fear conceding a goal that would give their rivals a crucial advantage. In addition, it is also criticized the injustice, especially in extra time, of forcing the local team to score twice when the visitor has scored a goal”the president pointed out.

Among the arguments that UEFA added to explain the change in its regulations, it pointed out that “it can be considered that there are many different factors that influence this decrease in home advantage. The boundaries between playing at home or away have become blurred.”

The double value of the goals brings back an unfortunate memory for Real Madrid. In 87-88, the Whites fell in the semi-finals against PSV Eindhoven after drawing 1-1 at the Bernabu and not going beyond the tie to zero in the Netherlands. La Quinta del Buitre lost a great opportunity to play in what would have been their first European Cup final. PSV, ultimately champions, also took advantage of that rule in the quarterfinals.

Also in the Copa del Rey

This new way of approaching the knockout rounds has also been reflected in other competitions such as the Copa Libertadores, the South American Cup or the Copa del Rey itself, where it made its debut in the semi-finals. Thus, the 1-2 of Rayo-Betis allows Madrid with a 0-1 in Seville to take the duel to extra time, when before it would have needed to repeat that 1-2 to force the extra half hour. In the same way, the 1-1 between Athletic and Valencia does not force Marcelino’s men to score at Mestalla, since the goalless draw is also worth it to stay alive and dispute the extra time with the pass to the cup final at stake.

Be careful, away goals are no longer worth double