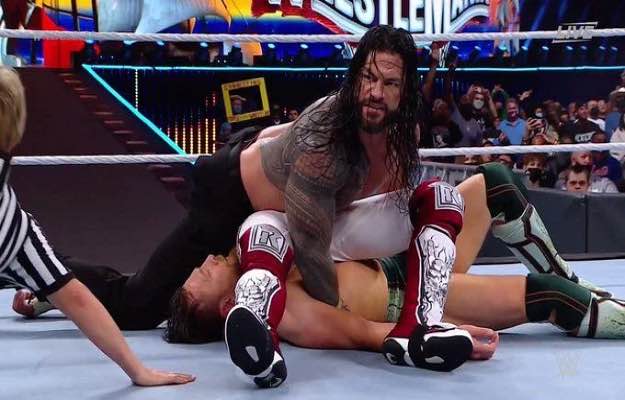 Universal Champion Roman Reigns he was the last guest of the series “My Wrestlemania Moment” on YouTube to talk about what is the most special moment for him at Wrestlemania. This was what the champion said.

“If you want me to choose my favorite Wrestlemania moment, it is almost impossible. I have too many moments in my head. I’ve been to 5 Wrestlemania core events and I’ll be on my 6th soon. Although thinking about it, I should have been in seven central events of Wrestlemania, “said Reings in reference to the situation of Covid-19 in the year 2020 that prevented his fight with Goldberg at Wrestlemania 36.

Despite this, the tribal chief ended up opting for his most recent match at Wrestlemania, which was against Daniel Bryan and Edge in a triple threat at Wrestlemania 37.

“After all, I think I have the year 2021 left. At Raymond James Stadium. I practically crushed them, tore them apart and covered them both. I think that in that event I created the definitive ending for a main event closing at Wrestlemania. So I will take the moment in which I defeated Daniel Bryan and Edge as if nothing, “said the Universal champion.

In the next edition of Wrestlemania, Roman Reigns will face WWE Champion Brock Lesnar. After many months of rivalry, both fighters will close the great event in a championship unification fight in which the winner takes it all. At the moment the real plans for the conclusion of the fight are unknown, although there are great possibilities that the tribal chief ends up solidifying his career by defeating Brock Lesnar in his third fight in a Wrestlemania main event.