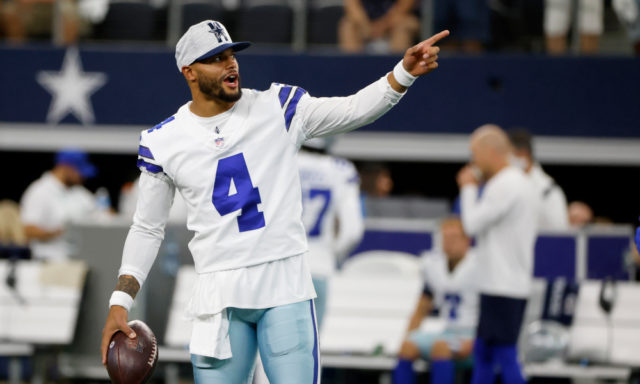 This Tuesday, head coach Mike McCarthy made his first appearance before the media since last January 19. On the sidelines of the NFL Combine taking place in Indianapolis, McCarthy discussed the current status of the Cowboys in various ways. However, the coach’s announcement of further surgery on quarterback Dak Prescott came as a surprise.

As McCarthy told the media, Prescott underwent surgery on his left shoulder last week. Apparently, the quarterback dragged an “irritation” in that area for much of the season. About the surgery, the head coach said it was a cleanup procedure. And with Dak’s throwing arm not affected, he should be healthy and available for offseason workouts in May.

“That is not a cause for concern”McCarthy said of Prescott’s surgery. “We are not worried. She is doing well.”

Cowboys coach Mike McCarthy on the “clean-up” surgery to QB Dak Prescott’s left (non-throwing) shoulder: “It’s not a concern. We have no concern. He is doing well.” Expected to be full participant in team’s offseason workouts. https://t.co/bQwm1ZNmwA

It’s worth mentioning that seven other Dallas players also recently underwent surgery: wide receivers Michael Gallup and Brandon Smith, defensive ends Randy Gregory and Chauncey Golston, safeties Donovan Wilson and Darian Thompson, and tight end Blake Jarwin. This was indicated by McCarthy, who said that everyone is expected to be recovered when the team returns to training.

Getting back to Dak Prescott, reports after Coach McCarthy’s press conference provided more details about the surgery. According to Calvin Watkins of the Dallas Morning News, it was an arthroscopy on the QB’s left shoulder. That procedure is considered minor, so there is no concern heading into training camp and next season.

A source said the specific procedure Dak Prescott had was arthroscopic surgery on the left shoulder. It’s not considered serious. @dmn_cowboys

It’s worth mentioning that this is Prescott’s third surgery in the last two years. The first was due to the dislocation and fracture of his right ankle that occurred during a game against the Giants in October 2020, an injury that caused him to miss the rest of that season. Months later, Dak had a second procedure on his right ankle, this to clean the area affected by said injury.

Now, learning about Dak Prescott’s sore left shoulder raises some eyebrows, even if it’s not his throwing arm. Admittedly, this couldn’t be related to the calf injury sustained in Week 6, after which Prescott had a noticeable performance slump. However, Mike McCarthy ruled out that the discomfort in the QB’s shoulder affected his performance.

Besides, the non-participation of the quarterback in the Pro Bowl could be due to said annoyance. Recall that Prescott was invited to participate in the game of the stars in the NFL due to the absences of Aaron Rodgers and Tom Brady. But Dak declined the invitation, according to him, to avoid unnecessary blows. Likewise, the quarterback said that he wanted to turn the page and focus on preparing for the next season.

Why did Dak Prescott pass on playing in the Pro Bowl? “Didn’t want to take any more unnecessary hits I guess you could say or just wear on the body,” Prescott said after a 7-Eleven event at The Star. “Wanted to turn the page, get ready to just start next season .”

Either way, Prescott becomes the third Dallas player to reveal playing through discomfort during the 2021 season.

The first was running back Ezekiel Elliott, who said he had been carrying a partial tear of the posterior cruciate ligament in his knee since week 4. And this was revealed minutes after Dallas’ elimination in the playoffs. Days later, linebacker Micah Parsons said he played the entire season with a hyperextended elbow, an injury that occurred during the Cowboys-Rams practice during training camp.

Now, the case of Parsons is different from that of Elliott and Prescott. Despite dragging said annoyance, the rookie showed a very high performance in his first year in the NFL. This is how they let him see his records in 2021 and his award as Defensive Rookie of the Year. On the other hand, Zeke and Dak started the season at a great level, but injuries and discomfort affected his performance. And that was noticeable, especially during the second half of the campaign.

While Dak Prescott’s surgery is routine and worry-free, it’s still surprising. Of course, not knowing about the nuisance in question doesn’t help minimize the criticism surrounding the quarterback and the cowboy team itself. And this is happening at a time when Dallas fans are pessimistic about the 2022 NFL season.

Dak Prescott underwent a new surgery. How serious is it?