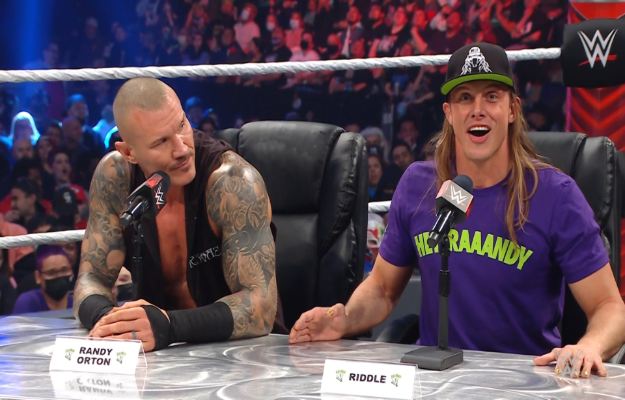 After three weeks of passing challenges in raw, tonight Randy Orton Y Riddle they have their last test to obtain a rematch for the titles as a couple, RK-BRO and Alpha Academy face an academic challenge.

RK-BRO on his mission to get a rematch

After unfortunately RK-BRO lost the championships as a couple before Alpha Academy, they have not tired of seeking their revenge for those titles in a series of different challenges, the first was a spelling challenge won by Randy Orton & Riddle, in the second challenge which was a scooter race this one was won by Chad Gable With a little help from Otis, tonight the third and final test is a knowledge challenge.

The first question goes to the reigning tag team champions and is answered correctly by Chad Gable, the next round is also answered well by RK-BRO, They continue like this until Riddle and Randy Orton are wrong when responding in a category, that gives them the opportunity Alpha Academy to take advantage.

Your luck runs out when Chad Gable is confident and also wrong, which allows RK-BRO to recover until answering the decisive question, in the end the scoreboard says it all and RK-BRO win the challenge and have a shot at the tag team championships.

Alpha Academy take their anger out on Street Profits

After RK-BRO leave, The Street Profits come to make fun of them and this generates a fight between them vs Alpha Academy, the meeting begins being dominated by Otis since before the bell even rang, the student prodigy destroys with his great power imposing respect.

Although Angelo Dawkins and Montez Ford do their best to recover but their fate is imminent and the champions raise their name, the fight is won by Chad Gable and Otis To show that they deserve respect.

RK-BRO get a rematch for the RAW Tag Team Championships