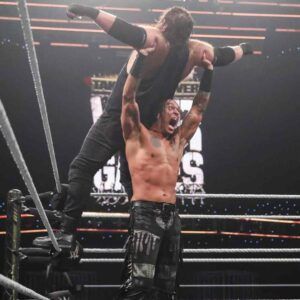 super star of raw member of Judgment Day, Damian Priest has revealed that asked permission from a legend to use his final move, that of a deceased hall of famer.

The superstar has Puerto Rican blood Damian Priest has exponential talent in the ring with a varied arsenal, currently part of Judgment Day with finn balor Y Rhea Ripley, the three together now walk on their own without the support of Edge Y They proclaim themselves the most dominant group of all, Damian has revealed a curious fact regarding his moves in the ring.

During a recent interview for the podcast under the ring the super star Damian Priest has revealed that he asked legend and Hall of Famer Razor Ramon for permission to use the Razor’s Edge, This was what the super star said in the aforementioned portal.

“Scott Hall was as great as his character, I assure you, he is one of my idols and he would give me advice, sit next to me, watch my matches and, you know, point out things that he saw that I needed to try to improve. Then one day I asked him if it was okay if he could use his move, Razor’s Edge and he said ‘Of course I do man, you can take anything of mine that can make people remember me’”

It should be remembered that the legend passed away on March 15, in a certain way before his descent Damian Priest paid tribute to him by applying his characteristic move that fans remember, regarding all Judgment Day, At the moment no story or planned fight is scheduled for them more what was seen in the past RAW with Mistery King, this could be the birth of a new rivalry.

Thank you for sharing your time and enjoying this passion with PLANET WRESTLING. The best wrestling and wrestling information in Spanish, interviews, videos, coverage and live monitoring. Do not forget that you can directly access all WWE news and of next PPV, Money in the Bank.