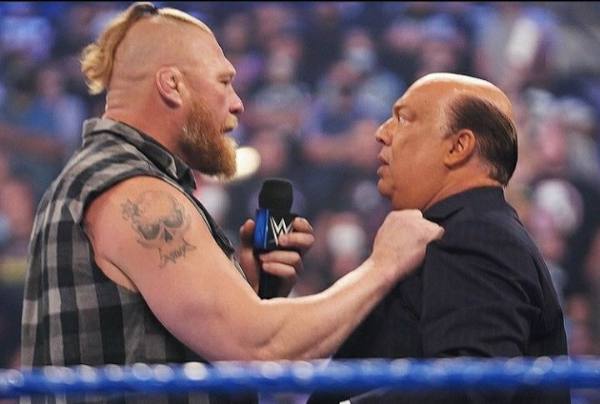 At the beginning of the night we had the long awaited return of Brock Lesnar to Smackdown and had a face-to-face with The Bloodline which ended in a dispute.

Brock Lesnar’s return results in a feud between The Bloodline

Suddenly the entrance music of Brock Lesnar sounds and he makes a presence in the stadium with a crazy audience, Lesnar went to the ring directly to face Roman reigns but The Usos got in the way, Lesnar takes the microphone and asks Paul Heyman a question, Why didn’t you tell Roman Reigns that I was going to be at SummerSlam? to this Roman showed an enraged face to Paul and took his universal championship leaving the ring next to the Usos.

In this way Brock Lesnar and Paul Heyman are left alone in the ring, Paul is nervous and Lesnar only asks one thing, that Roman Reigns accept his challenge the challenge for the universal championship and it only gives you 5 seconds to respond, 5 4 3 2 1 F 5 TO PAUL HEYMAN, however at that time Roman Reigns and the Usos return to save Heyman and Roman almost gets an F5, but Jimmy & Jey save him and they are the ones who receive F5 and a Suplex, then they all retire and Brock Lesnar is left alone in the ring with a very confident smile.