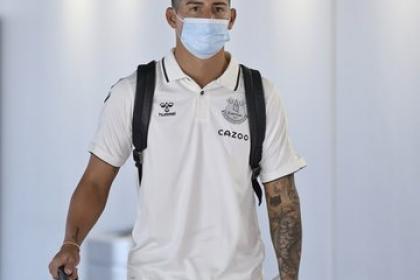 James Rodríguez is with Everton in the United States, ready to participate in the Florida Cup. Everything seems to be going well, except for one detail: will his last appearance be dressed in blue?

According to information from the Liverpool Echo newspaper, both the player and his agent, Jorge Mendes, have been officially informed of the decision about his future: he is a transferable player.

“ECHO understands that James Rodriguez, as expected, has been informed that he can leave Everton if there is a suitable offer,” the source reported.

The media assures that James, who was announced in August last year, has been one of those directly affected by the unexpected departure of Carlo Ancelotti and that from that moment his continuity is officially in doubt.

“Sources close to the player insisted that his departure was not safe just because Ancelotti had resigned, but his decision to fulfill the last year of his contract will have a lot to do with who entered as new boss. Benítez and Rodríguez experienced a tense relationship during the time. that the Spanish coach was in charge of Real Madrid and his appointment as Everton coach now seems to have helped make a decision for him, “says the media, which covers daily the incidents of the ‘toffee’.

Despite this situation, James traveled with the delegation to the United States, he has participated very actively and without a trace of physical problems in these first days of the preseason and, for now, he is concentrating on Millonarios, his next rival, this Sunday, in the Florida Cup. It is the reason why, as assured in FUTBOLRED, the tournament that prepares Everton for the start of the Premier League may well be a showcase for the southpaw, more than anything else.

Will they enjoy it at Goodison Park after this friendly? The fans, who supported him so much in his first year, marked by injuries, hope so, now that they will be able to return to the stadium. But the final decision is not in their hands but in the transfer market.