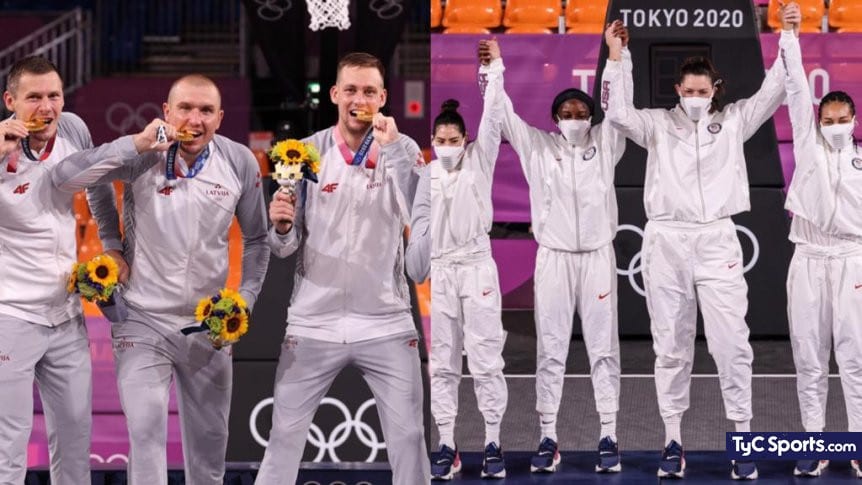 In its premiere in an Olympic Game, the gold in the modality ended up being in the hands of the Europeans in the masculine branch and the North Americans in the feminine branch.

In its debut in an Olympic Game, the 3×3 basketball mode he already has his first gold medalists at Tokyo 2020: Latvia and USA. The Europeans beat the Russian Olympic Committee (ROC) by 21-18 in the men’s branch, while the North Americans did the same against the Russians, by 18-15, in the women’s.

Latvia, men’s Olympic gold in the debut of 3×3 basketball in Tokyo 2020

In a very close match in which the ROC led on the scoreboard with less than five minutes to go, Latvia did not give up at any time and managed, thanks to Karlis Lasmanis, to turn the scoreboard and hang the first gold medal of men’s 3×3 basketball of history.

Latvian Lasmanis finished the match as the match’s top scorer with 10 points -and with the achievement of the final basket that ended the contest by reaching 21 points-, followed by his compatriot Nauris Miezis and the Russian Ilia Karpenkov, with seven goals each.

Serbia, far superior to his rival, he hung the bronze medal after beating the Belgian team by 21 to 10, with almost two minutes to go before the top ten regulations were met. Dusan Bulut was the top scorer of the game with seven goals.

United States, women’s Olympic gold in the debut of 3×3 basketball in Tokyo 2020

The Americans, top favorites, dominated the game from the start and were superior to their rival, coming to surpass the Russian Olympic Committee by seven points with less than four minutes to go.

The ROC did not give up and managed to close the gap to put 14-11 on the scoreboard, but the USA – with a great Dolson Stefanie, top scorer of the match with seven goals – did not allow the comeback and sealed the victory that gave them the medal golden.

The bronze went to China, who managed to beat the French team led Laetitia Guapo – who for the first time since 2018 has been left off a podium – by 16 to 14 points in a match that forced one of the medal favorites to stay off the podium. Lili Wang shone above the rest and scored more than half of her team’s points, with a total of 9.