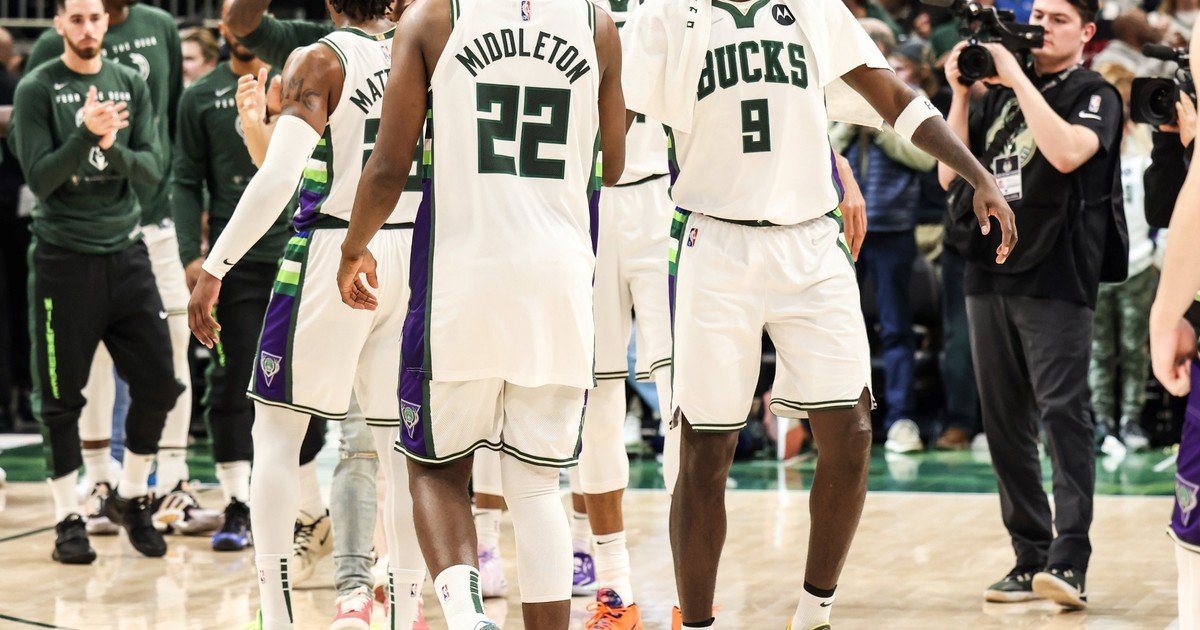 with the Argentine Luca Vildoza as a substitute, in his debut as Milwaukee player, the Bucks began the defense of the ring with a tight win against the Chicago Bulls 93-86. Greek Giannis Antetokounmpo, a finalist for the season’s MVP award, led Milwaukee with 27 points and 16 rebounds although he spent much of the fourth quarter on the bench due to foul trouble.

Montenegrin center Nikola Vucevic was the top scorer for the Bulls with 24 points and 17 rebounds, but in the last minute he missed two shots in a row under the rim that facilitated the victory of the locals. The other Bulls figures were far from the best version of him. Veteran DeMar DeRozan had an erratic shooting night with 18 points (6/25) and shooting guard Zach LaVine had 18 points and 10 rebounds. Despite a weak night in attack, the Bulls’ defense, led by Alex Caruso, forced the defending champions to fight for victory until the last minute.

Another great display from Giannis Antetokounmpo for the Bucks. (EFE)

“It’s been a long eight or nine days without playing a game. We were a little out of rhythm,” Antetokounmpo justified.

With a basket over Jayson Tatum’s buzzer, the Boston Celtics beat the Brooklyn Nets 115-114 this Sunday in an exciting first game of their NBA playoff series.

The highest tension clash took place at the TD Garden in Boston, where the Celtics signed a valuable and agonizing first win thanks to Tatum’s winning double. The young All-Star forward, who scored 31 points, ruined the exhibition of Kyrie Irving, who led the Nets with 39 points before his old fans, who did not stop booing him throughout the match. In Boston they do not forgive the controversial point guard for breaking his word to renew with the Celtics and leaving for Brooklyn in 2019 to meet with Kevin Durant.

Irving, who gestured to the stands after some of his stratospheric baskets, came very close to giving the Nets the victory with a spectacular fourth quarter in which he scored 18 points. “It wasn’t hostility, it’s basketball. I try not to focus on that,” Irving said, downplaying the hostile reception from the crowd. “You have to accept it. It’s the dark side.” His partner Kevin Durant was somewhat off with 23 points on a 9/24 shooting stat.

The Nets didn’t have enough of today’s best duo to get past Boston, the most in-form team in the league with 33 wins in their last 39 games. In addition to Tatum, three other Boston players reached 20 points: Jaylen Brown (23), Marcus Smart (20) and Al Horford (20).

All congratulations to Tatum, who finished the game. (EFE)

The match was tied at the last minute when Irving, with his sixth three-pointer of the game, looked like he was going to win the fight with the fans. After a missed triple by Durant, the last possession fell to Boston with 12 seconds left. Brown did not find the way to the basket and handed the ball to Smart who, instead of trying the triple, assisted for Tatum’s arrival in the paint, who eluded Irving and scored without opposition five tenths from the end.

The Phoenix Suns, the top seed in the West, beat the New Orleans Pelicans 110-99. hand in hand with a relentless Chris Paul, who dictated another lesson with 30 points and 10 assists.

The point guard took control of the game when the Pelicans, who were from behind for the entire game, made one last attempt by closing in on eight points (79-71) at the end of the third quarter. In the last quarter, Paul punished the opposing defense over and over again until he scored 19 points in an immaculate 7/7 shooting from the field. The base is still chasing his first ring at 36 years old, after the disappointing defeat against the Bucks in the last Finals.

Shooting guard Devin Booker contributed to the Suns’ victory with 25 points while Lithuanian center Jonas Valanciunas had 18 points and a whopping 25 rebounds, 13 of them offensive.

In the first game on Sunday, the Miami Heat crushed the Atlanta Hawks (115-91) thanks to a relentless defense that dried up star Trae Young. Reserve shooting guard Duncan Robinson punished Atlanta with 27 points and 8 triples while Jimmy Butler, the figure of Miami, added 21 points.

On the other side of the court, the ferocious defense of Miami collapsed the Hawks and caused the worst game of the season for their leader, the talented Trae Young, who had 8 points and 4 assists. The Heat, runners-up in 2020, entered the game with much more rest than the Hawks, who qualified for the playoffs through playoffs.