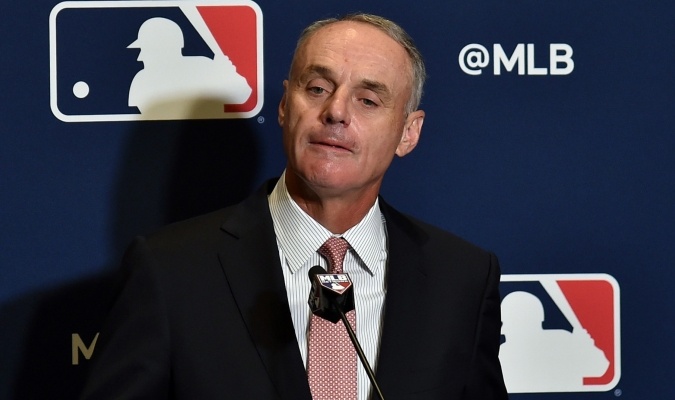 The ninth commissioner of the best baseball in the world was born on September 28, 1958 in Rome, New York. He is a lawyer and business leader, along with his wife, Colleen, he has four children: Megan, Michael, Jane and Mary Claire.

He was previously the Chief Operating Officer of some companies, in the Majors he became Executive Vice President of Economy during 1998, then assumed the position of Commissioner on January 25, 2015, when Bud Selig left the position. He was reelected for another five years through the 2024 season.

Also read: When was the last time spring training games were called off?

During his time as the highest authority of the Big Top, he established the rules that seek to reduce the duration of the matches. He was also a key player in the first drug testing agreement between the MLB Players Association (MLBPA) in 2002.

Similarly, he represented Major League Baseball in negotiations with the MLBPA, forming new collective bargaining agreements in 2002, 2006 and 2011.

The Commissioner is a controversial character, during his administration he has received criticism for his actions to try to shorten the duration of the games, such as the suppression of the four deliveries to grant intentional walks, the rule for each pitcher to face at least three sluggers , as well as the number of visits that can be made to the mound.

Before that, a lot of fireworks were raised for his comments in 2020 regarding the World Series trophy, which he called a “piece of metal.” The comment was made as he was trying to explain why he considered it a futile act to strip the Houston Astros of their 2017 title following the sign-stealing scandal.

His words aroused the annoyance of many, such as the third baseman of the Los Angeles Dodgers, Justin Turner, who did not keep anything inside:

“I don’t know if the Commissioner ever won anything in his life. Maybe he hasn’t. But the reason all the men are in this room, the reason all the men are exercising out of season, and they show up to camp early and put in all the time and effort is specifically for that trophy, which is called the Commissioner’s trophy by the way. So for you to devalue it like you did yesterday just tells me how out of touch you are with the players in this game. At this point, the only thing that devalued that trophy is that it says ‘Commissioner’ on it,” the “Red Baron” said at the time.

According to the Forbes portal, Rob Manfred earns 11 million dollars in salary, a little more than Adam Silver of the NBA and Gary Bettman of the NHL who earn 10 million, but all well below Roger Goodell, whom the NFL pays 63.9 million dollars.

That circuit announced in October of last year, a compensation package of 128 million for its Commissioner.

Rob Manfred and his flirtation with controversy