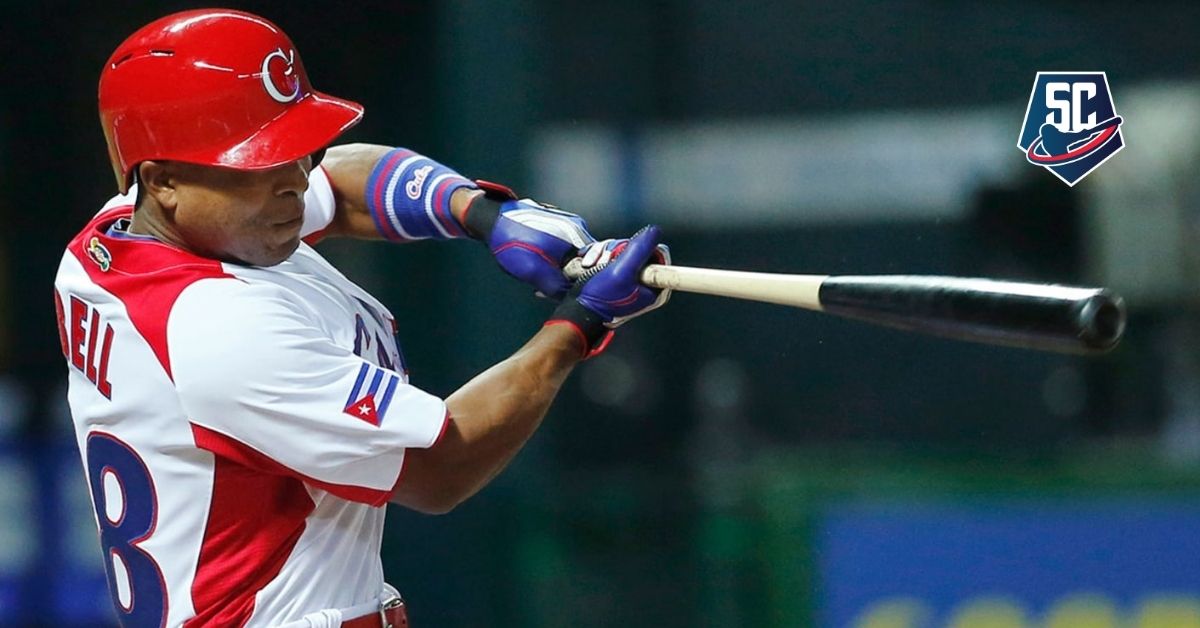 On the night of April 2, the Complete Swing Show, star space of our YouTube channel, which airs Monday, Wednesday and Friday at 8:30 pm, Cuban time, had as a special guest the stellar gardener from Santiago Alexeis Bell Quintero, one of the most complete players who has gone through the National Series.

In addition to his innate qualities to play baseball, both physical, reflexes and intelligence, “El Tato”, as Bell is known on and off the ball courts, left his mark on the island during the 14 seasons he played. .

It may interest you: “They are a hoax”, STAR of Industriales CRITICIZED the reinforcements in the Cuban ball

Stealing 132 bases in 183 attempts, for a very high 72.1% effectiveness, attests to his speed on the bases, while his .977 defensive average with only 43 errors in 1830 throws, with 85 assists, show his skills with the glove. and his excellent arm, almost always playing right field.

«In the Olympiad (in Beijing, 2008) the scouts had me crazy and I said that I wish there was something good to decide, but there were many things that happened if you stayed, your family in Cuba, that if you were a deserter, that if you go by boat, “said Bell in the aforementioned program about his desire to play in the Big Top, which it was already reported in a previous note on our website.

However, despite owning the five tools a player must have to shine in baseball and star in one of the most prolific campaigns for a hitter in the National Series, when in the regular season of Series 47 (2007-2008 ) hit 31 home runs and accumulated 111 RBIs, records for the moment, Bell never made up his mind to leave Cuba to seek a future as a professional in the Major Leagues and by the time he did, it was perhaps too late.

“It was one of my dreams, to be in a Major League organization, but I was aware that at that age it was a bit difficult. There was a lot of talented kids there. We started to play well with each other, but I was 32 years old. My coach was the same age, “said the gardener from Santiago.

Asked in the Show about why Bell decided to request the withdrawal of Cuban baseball and leave the Island, even though he was already a veteran, the indomitable expressed:

«They told me that if I asked to leave, I could do this and that. Right there I said that even when they were going to continue doing things wrong, not to say otherwise. It’s good to fight with these people. I am going to try to do something so that where I am my family will also be with me “, I thought at the time. I found out what had to be done, the steps to follow, and I did those steps with what they asked. “

“Although I was a public person, known or famous within the country, I had to do what they asked: to have a personal passport… but, for that, I had to request discharge. So I unsubscribed and took the necessary steps. »

In 2015, Bell played with the Quebec Capitals in the now-defunct Canadian Independent Baseball League CanAm and, upon his return, requested the removal of his Santiago de Cuba team and Cuban baseball, after not being considered for the Cuban team that participated in the Pan American Games in Toronto in 2015.

“I made that decision because I went to Canada and they told us we were eligible, and after being in Canada they make the team and I do not appear in the preselection or in the team and they do not give me an explanation”, He said Bell in that year to the journalist Brita García of the indomitable press.

«I am an athlete who through the years have had national performance. We just got back from a Caribbean Series. I started well in Canada, having performance and I don’t know what explanation they gave to the people of Cuba (…) I was a little upset about that, “he added.

“It’s something personal. I have been giving everything for 14 years for our province, for our Cuba team and they are decisions that make you make, practically, “concluded Bell in his words in 2015, making it clear that he felt in full physical faculties and that he was not thinking of retiring.

It may interest you: ATTENTION GALLOS: He returned to the pitcher’s star box from Spiritus

And so he did … Bell played in 2016 with the Tigres de Quintana Roo of the Mexican League, a team with which he hit a home run, before targeting the Major Leagues, playing in the Minor Leagues with the Texas Rangers.

Returning to the interview conducted in “The Complete Swing Show”, Bell contributed other interesting elements about his departure from Cuba.

«If you enter (Cuba), they want to do whatever they want. That is why I always say that you have to have them well placed to enter and that is why many people do not do it. I went in and did what they asked me, the trouble is that they wanted to convince me, but I said I didn’t want to play anymore. I’m sorry, they supported me a lot in everything and I gave myself one hundred percent to my province, but no, I was already good to put up with all the things they do, “said the player.

«They saw that I was screwed, I told them that I was not going to play anymore, I finished and I was going to take my family. People said that I was crazy. I did everything that had to be done and I left for Mexico, “added Bell.

“I LASTED too long, I DIDN’T play anymore and I TAKEN my family,” CONFESSED Alexeis Bell