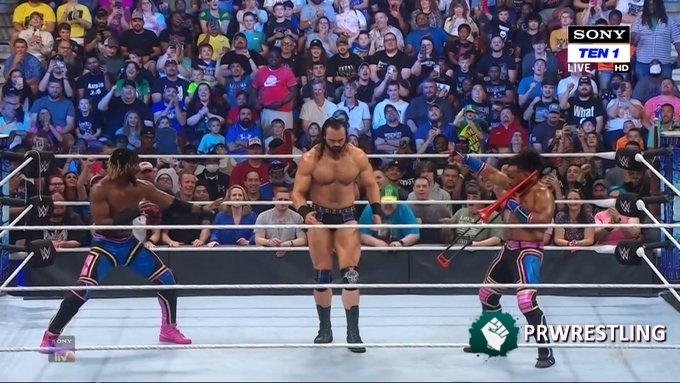 
The Usos taunted RK-Bro and bragged about injuring Orton. Suddenly, Shinsuke Nakamura’s music interrupted. Nakamura challenged The Usos to face him and his brother. Nakamura introduced Riddle with a great reaction. Riddle and Nakamura tried to enter the ring, but The Usos cut them off in the fight.

Back from the break, Kayla Braxton approached Riddle and Shinsuke Nakamura. They were trying to find a name for the team. Riddle mentioned that it was Randy Orton’s idea for him to team up with Nakamura.

In the locker room, Bazler, Natalya and Shotzi decided to go into the ring. Shotzi went back for his helmet, but Aliyah closed the door. Aliyah was on the other side with the key.

Raquel Rodríguez defeated Ronda Rousey via DQ when Natalya and Bazler ran in and attacked Rodríguez. This leads to:

They announced that Moss is coming back next week.

In the back, Max Dupri approached Adam Pearce. Pearce reviewed the contract and welcomed Dupri to SmackDown.


The KO Show with a member of The Bloodline. Owens introduced his guest, locker room leader Sami Zayn. Owens called Zayn a close confidant of Bloodline.

They praised each other but in the end Zayn and Owens started arguing and insulting each other. Owens got angry and claimed that Bloodline didn’t care about Zayn. Zayn was furious and claimed that Elias and Ezekiel were two different people. Owens noted that The Usos abandoned him on Raw.

Owens then introduced The Bloodline to show that they would not date. He said that this is proof that Zayn is not a member of The Bloodline. Zayn heard enough and walked away. Owens went after him and begged him to come to Raw.

Zayn pushed Owens away and walked away. In the ring, two members of the team began to clear the KO Show set. Owens jumped into the ring and gave both of them Stunners.

In the back, Sami Zayn spoke with The Usos. Zayn can’t help but feel that Owens was right. He thinks The Bloodline doesn’t care about him. He asked to be an honorary Use to make himself feel better. Jimmy agreed, but Jey seemed unsure.

New Day & Drew McIntyre defeated The Brawling Brutes in the main event. Drew danced with New Day after the match.