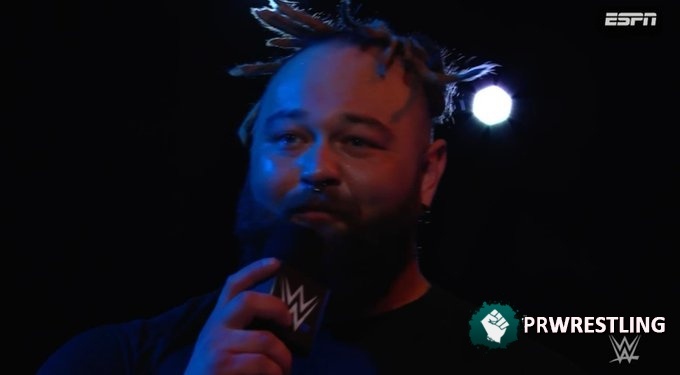 Smackdown opened in the parking lot at the scene of a car accident. Michael Cole explained that Karrion Kross and Scarlett had an accident. Suddenly, Drew McIntyre ran out and attacked Kross.


Sami Zayn spoke with Sola Sikoa and Jey Uso. Roman Reigns called Zayn. Zayn blamed Jey for his loss on Monday. Reigns yelled at Jey on the phone and told him to make sure Zayn gets the win tonight.

In the back, Triple H talked to the officers, presumably about Karrion Kross’ car accident.

Rey Mysterio walked over and gave a heartfelt speech about his recent issues with Dominik Mysterio. He came to SmackDown to tell Hunter to his face that he was quitting.

Triple H wouldn’t let him go and begged Mysterio to give him a few minutes to figure something out. They entered Triple H’s office.

In the dressing room, Roxane Pérez spoke with Shotzi when Raquel Rodríguez entered. Damage CTRL arrives Perez angered Bayley when she pointed out that she was on a losing streak and challenges were thrown.

Braun Strowman defeated James Maverick and Brian Thomas. Omos and MVP were outside.

Then MVP gave credit where it was due and praised Strowman. But, Strowman looks normal standing next to Omos.

Another Viking vignette aired, this time narrated by Sarah Logan.

Kayla Braxton interviewed Sonya Deville. She mocked Liv Morgan for losing the title. Right at the moment, Morgan attacks Deville. Morgan placed Deville on a table, climbed onto a structure and hit a senton.


Fatal Four-Way: Rey Mysterio defeated Sheamus, Ricochet and Solo Sikoa to be the new challenger for the IC championship.

Before the match, they announced that Karrion Kross was out due to injury. They introduced the replacement Rey Mysterio with a great reaction. During the match, Michael Cole announced that Mysterio is now an official member of the SmackDown roster.

Bray Wyatt comes out to a tremendous ovation. He has a new entry topic. This time it is Bray the person, who looked emotional and thanked everyone for the support in this difficult year, where he lost his career and two other people.

Then the masked person appears on the screen and tells Wyatt that he has to go back. And so the show abruptly ends.