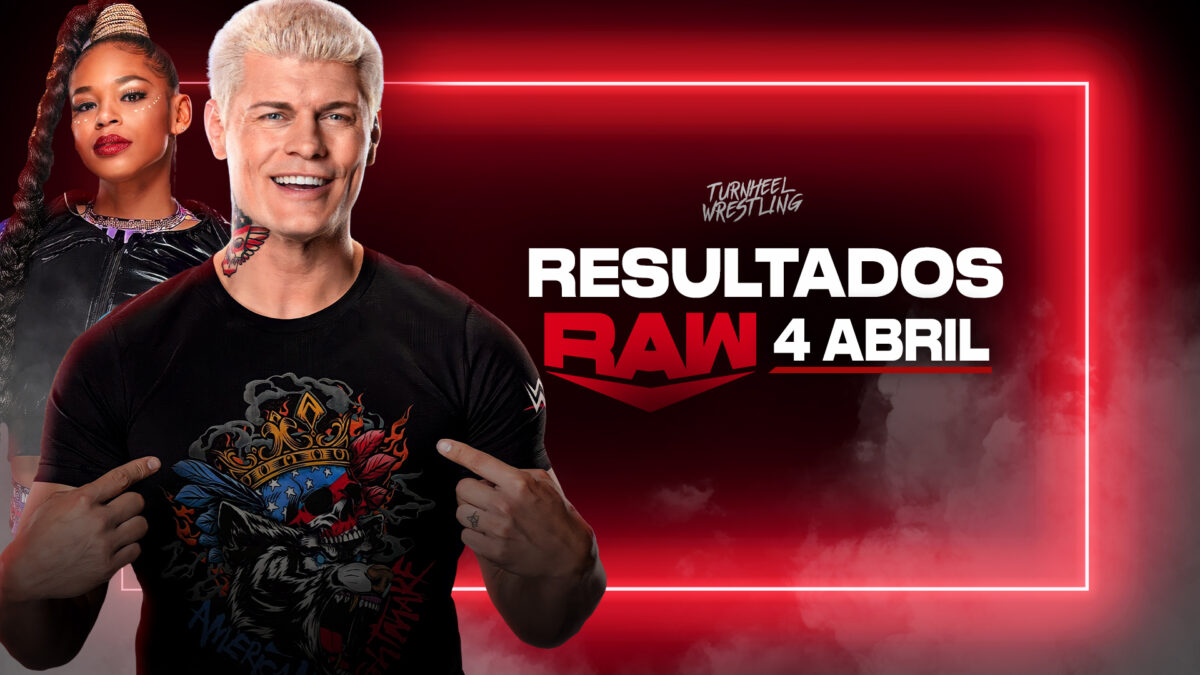 All the results of WWE RAW April 4.

Tonight, WWE celebrates the Raw show after WrestleMania 38, and this time it will take place from the American Airlines Center, in Dallas, Texas. In this program, Cody Rhodes will speak for the first time in a WWE show since 2016 after returning to the company on the first night of WrestleMania. You can check the complete preview of this episode of the red mark on our website. Next, we leave you the RAW results April 4.

Monday Night Raw kicks off with Cody Rhodes. ‘The American Nightmare’ indicates that since he became a free agent he decided to remain silent until signing with WWE, which was not a difficult decision. Next, he shows an image of his father Dusty Rhodes. Cody states that he was always his hero, as he sheds a few tears.

Cody points out that in the photo his father had the World Championship, which unfortunately he could not win because he emerged victorious from that contest by disqualification. Since then, he always wanted to win the title to give it to his father. Unfortunately, he won’t be able to get it, since Dusty is no longer with us, but he can get world gold for himself.

Rhodes was claiming that he will get the company World Championship until he was interrupted by Seth Rollins. Cody shakes hands with Seth. He accepts it and welcomes him back to the company.

Sasha Banks and Naomi appear in the ring to face Rhea Ripley and Liv Morgan. If the WWE Women’s Tag Team Champions lose, they must give Ripley and Morgan a starting opportunity.

Kevin Owens appears on Monday Night Raw. ‘KO’ affirms that he fought with a back injury, due to a problem he had in the gym, against Stone Cold at WrestleMania 38. However, he decided to compete in the ‘Showcase of the Immortals’ because he did not want to disappoint the Universe of WWE. Immediately afterwards, Ezekiel, previously known as Elijah, interrupts.

Ezekiel says that it is not Elijah, but his younger brother. Meanwhile, Kevin Owens and the public affirm that he is Elijah. Kevin then gives him 10 seconds to leave the ring. He starts counting, and when he finishes he decides to leave the ring.

Dominik Mysterio makes his entrance to fight The Miz.

Bianca Belair makes an appearance at the show. The first thing the new Raw Women’s Champion does is take off her glasses so they can see the bruise she has on her left eye. Next, she affirms that she put herself back together after the defeat she suffered in the past SummerSlam to achieve her dream at WrestleMania 38.

Belair says that the WWE Universe deserved better than Becky Lynch as champion, which is why she worked so hard to win the title. Later, she states that her experience has helped her a lot, so she vows to be the best Women’s Champion in history by defending the gold against every opponent that comes her way.

In the next fight, the NXT Championship will be at stake. Dolph Ziggler defends against Bron Breakker.

MVP arrives in the ring to introduce Bobby Lashley. ‘The All Mighty’ admits that Omos pushed him to his limits at WrestleMania 38, but he was finally able to manage to get the win. Omos interrupts and demands a rematch fight. Next, MVP betrays Lashley and together with Omos they attack him.

Liv Morgan and Rhea Ripley meet backstage. Both decide to give themselves the opportunity to fight as a team again next week.

Queen Zelina and Carmella appear in the ring to face Natalya and Shayna Baszler. Before the match, Zelina berates Carmella for asking for the Women’s Tag Team Championship at WrestleMania 38, and attacks her. Carmella uses Corey Graves as a shield, so Zelina ends up leaving. To finish, Carmella kisses Graves on the edge of the comment table. Ultimately, the fight did not take place.

The Usos taunt Austin Theory, reminding him of his loss at WrestleMania 38, before teaming up to face RK-Bro and Finn Bálor in the following match of the night.

Edge makes his entrance to address the public. He claims that he was correct in saying that AJ Styles would have doomsday at WrestleMania 38, although he admits that he was surprised to see Damian Priest’s presence. Next, he asks everyone to stand up and applaud to receive someone who respects his word, none other than ‘Archer of Infamy’.

Edge asks Priest what inspired him to help him at WrestleMania 38. Damian says that he has always been his fan, and that he related when ‘Rated R-Superstar’ indicated that he did everything to please the public, but of that way he couldn’t feel himself. Later, both were formalizing their alliance in the middle of the ring until AJ Styles interrupts.

AJ Styles attacks Damian Priest on the entrance ramp and goes for Edge. He lashes out at the WWE Hall of Famer, and when he goes to get some chairs to continue the punishment, he is distracted by Priest. Both connect a combined move on ‘The Phenomenal’, and when they were going to hit him with the chairs, different company personnel appeared to stop them.

The Street Profits enter to face American Alpha. Before the fight starts. Chad Gable and Otis attacked their rivals. Due to this act, Adam Pearce made an appearance to change the stipulation of the match to a Texas Tornado match.

Roman Reigns appears alongside The Usos and Paul Heyman. The latter mentions all the achievements that The Bloodline has had in recent times. Later, Roman affirms that he kept his word by defeating Brock Lesnar at WrestleMania 38, and that now he will look for new challenges, but that will be said next Friday on SmackDown. To finish, he asks the entire audience to recognize him.