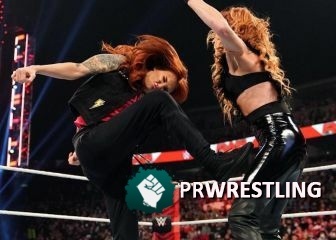 Notes of what happened on Monday night:


Academic Challenge: Quiz Bowl — Randy Orton and Riddle defeated Chad Gable and Otis in a comedy segment that ends with the final “Metric Conversions” question. They ask how many grams were in an ounce. Gable was wrong. Riddle was about to reply, but Orton said that he would take it and told Riddle that he is not the only one who bakes. Orton correctly hit 28 grams. RK-Bro wins the Quiz Bowl and wins a title match.

Bobby Lashley and MVP in the ring – Lashley insulted Lesnar, mentioned how infrequently he defended the title and wondered when he last wrestled on Raw. Lashley hoped he could pin Lesnar once more.

Miz TV with Miz & Maryse with guests Rey & Dominik Mysterio ends with insults when Miz noticed that Dominik was much taller than Rey and said, “Are you sure you’re not Eddie’s son?” This leads to:


R-Truth, Tamina, and Akira Tozawa were shown running around the back. Unknowingly, they walk past Dana Brooke and Reggie, who almost kiss.

Lita/Becky Lynch segment – ​​Lita said that Lynch should worry about how she would feel when Lita became a 5-time champion. Lynch said the fans were all Lita would ever have. Lynch attacked, but Lita fought back and gave him a Twist of Fate and a moonsault.
Doudrop defeated Liv Morgan

Alexa Bliss with the psychiatrist said that Bliss cried when the doll was returned to her, but remained calm and that was progress. She made a story about an attack in a grocery store.

Riddle defeated Seth Rollins via DQ when Owens ran through the crowd and attacked Riddle. This leads to: