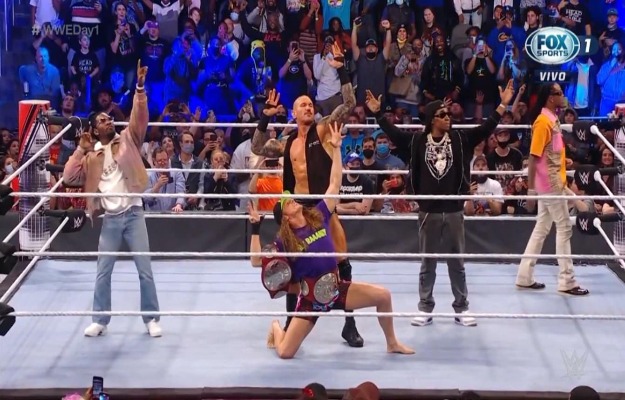 The event WWE Day 1 continues to develop, in the fourth fight of the night, third of the main card, the Champions for Couples of Raw ,RK-Bro (Randy orton and Riddle) defeated The Street Profits (Angelo Dawkins and Montez Ford) keeping their medals.

Before the fight, the members of the music group Migos accompanied the champions at their entrance, staying by the side of the ring to show their support throughout the contest. Celebrating with them at the end of the duel.

In a very dynamic match, the champions managed to retain the belts. The fight was high-flying, with a very good pace. The agility of the challengers was seen combined with the technique of Riddle and the power of Orton.

Nonetheless, the champions were dominant at all times, giving no choice to his rivals throughout the fight. Finally, a RKO applied by “The Legend Killer “ assisted by his partner gave them victory. and therefore, to be able to keep the titles.

With this victory, the champions add their fifth successful title defense since they obtained the titles in Summerslam, event where they defeated AJ Styles and Omos, then owners of the belts.

With this they prolong their reign of 134 days of duration. Now, they will need new applicants to stand up to them at the next event of Wwe, Royal rumble. One of the main events of the year where they will need rivals to live up to expectations.

Thank you for sharing your time and enjoying this great passion with PLANET WRESTLING. Remember that you can follow us on our RRSS and here on the web so you don’t miss out on anything. Every day we bring you closer to WWE news, videos, interviews, as well as the best coverage and live follow-ups.