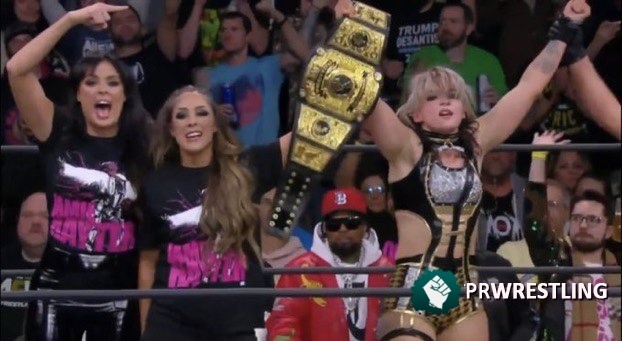 “Jungle Boy” Jack Perry defeated Luchasaurus (with Christian Cage) in a Steel Cage Match. Perry bled but in the end he launched himself with an aerial elbow on Luchasaurus, who was on a table. He then irons it to win.

High in the sky, @boy_myth_legend risks it all for the fight of his life!

The Elite came out with the song “Carry On” by Kansas, alluding to everything that has happened with them and there were choruses of “F#ck CM Punk”. Fenix ​​uses Pac’s hammer to win, but he looked sorry he did it.

Chris Jericho defeated Claudio Castagnoli, Bryan Danielson and Sammy Guevara to retain the ROH World Title. There was a lot of fighting between Jericho and Guevara. In the end Jericho beats Castagnoli to retain.

Saraya defeated Dr. Britt Baker DMD after hitting the Fisherman’s Driver twice to get the victory. Saraya looked good for his first fight in a long time, but the fans weren’t very involved.

Good night Doctor?! @Saraya was just inches from her first victory in #AEW!

Darby Allin and Sting defeated Jay Lethal and Jeff Jarrett (with Sonjay Dutt and Satnam Singh) in a fight without disqualification or countouts. They fought all over the arena. In the end Allin applies a Coffin Drop on Lethal to take the victory.

Jamie Hayter defeats Tony Storm to be crowned new Interim Champion. Rebel intervened in the match as did Britt Baker, who beat Storm outside of Stomp over the championship, but it wasn’t enough. In the end, Baker exposes a cornerback that Storm collides with, shortly after being defeated by Hayter.

More results after the event conclude.