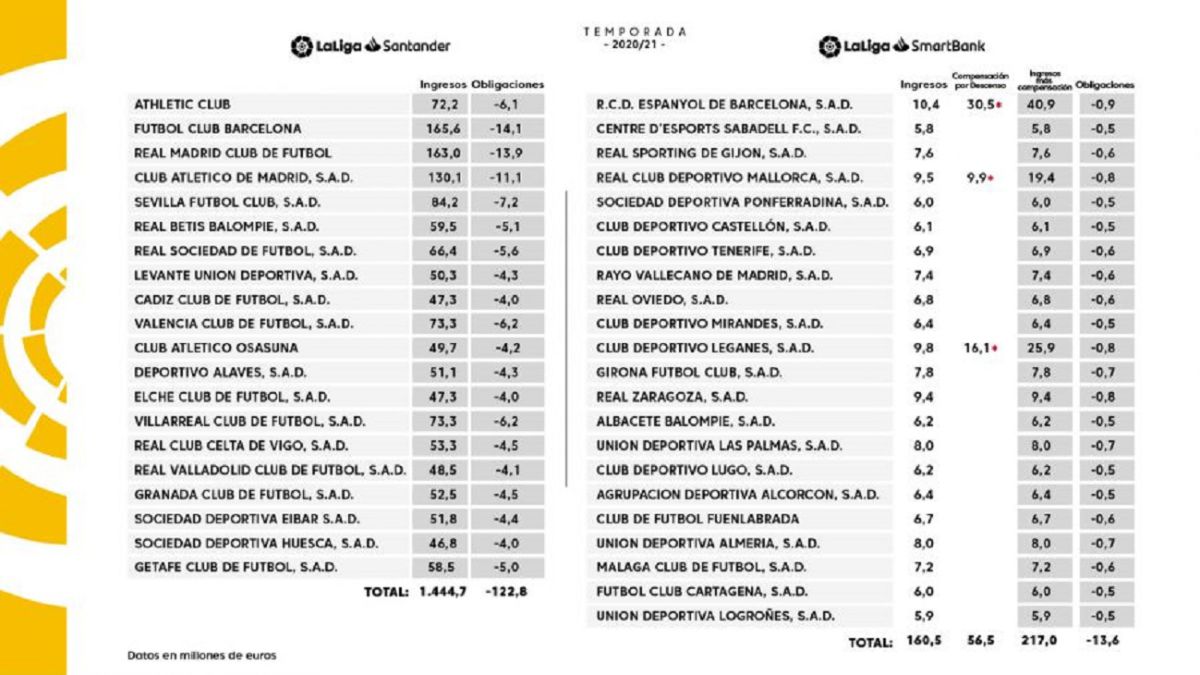 LaLiga has announced the distribution between the First and Second Division teams of television rights achieved during the 2020-2021 season. Barcelona remains the team that obtains the most money for this concept (165.6 million euros), followed by Real Madrid (163.2M €) and Atlético (130.2). In the Second Division, those who win the most are Espanyol (40.9), Leganés (25.9) and Mallorca (19.4). The clubs that received aid for relegation.

1,444.7 million have been distributed in the First Division euros among the twenty teams that made up the category in the 2020-2021 season. 27 million euros more than in the previous season have been distributed. Barcelona continues to be the one that receives the most (165.6 million compared to the 165 who won the previous season), but Real Madrid has been on the verge of achieving the sorpasso and taking away the crown: it has grown in a season from 156.2 to 163 million of euros. One of the reasons for this increase in the white team was the conquest of LaLiga in that season. The third in the ranking is Atlético with 130.1 million euros. The fourth, by far, with 84.2 million euros. The one who won the least in the First Division was Huesca (46.8M).

In the Second Division, 217 million euros were distributed, of which 13.6 million will be used to pay in bonds (aid to the CSD and the RFEF). The clubs that descended from First to Second are the ones that win the most in LaLiga SmartBank: Espanyol obtains TV revenues of 40.9 million euros (30.5M in aid); Leganés takes 25.9M (16.1 in aid) and Mallorca is third with 19.4 million (9.9 in aid). The one that receives the least money in the category is Sabadell, which took 5.8 million euros.

Regarding the teams relegated last season, a provisional aid amount of 40.2 million has been established for the three teams that lost the First category: 19.6 million for Eibar; 13.7 for Valladolid and 6.9 for Huesca. As for those who fell to First RFEF, the provisional distribution of aid for relegation is divided into 1.25 million for each team (Sabadell, UD Logroñés, Castellón and Albacete). In addition, five million were distributed among the four teams that descended to the old Segunda B in the 19-20 season. Deportivo, Numancia, Extremadura and Racing entered 1.25 million euros.

How are audiovisual rights distributed?

The distribution of income from television rights is carried out based on what is indicated in Royal Decree 15/2015. LaLiga distributes the net income, that is, the expenses of management and marketing are subtracted from the gross income. Of those net income, 90% goes to LaLiga Santander teams and 10% to LaLiga SmartBank clubs.

Criteria for distribution in First Division

-The other 25% comes from social implantation. All clubs have to pay a minimum of 2% for this concept and a maximum of 20%. This 25% is obtained through two criteria. One third is derived from the income from tickets and ticket offices (an average is made of the income obtained for this concept in the last five seasons). The remaining two thirds for the contribution of each club to generate value for audiovisual rights. In this, the audiences and the coefficients for their correction are taken into account, where the difference in the schedules of the teams, coincidences and whether it was open or paid broadcasts are seen.

Of the 10% that reaches Second Division clubs, the distribution of income is done with the same criteria as in First Division, but varying the percentages:

-15% for sports results- Unlike in First, in Second only takes into account the last season and the classification according to the order of the regular phase. Regarding the income from the Cup. If the criterion of weighing the last five seasons is maintained.

-15% for social implantation. Of this percentage, 1/3 comes from the income from tickets and box office and 2/3 from the generation of resources. The audience takes into account if the matches coincide with Madrid or Barcelona, ​​the TV channels that are broadcast, if they play the playoffs …

Where do the club’s obligations go?

Clubs must allocate part of their income to obligations. That money goes to the compensation fund for the relegated teams, the money that is given to the Federation (which will increase in the distribution of this season due to the Viana Pact), also in the promotion of the LaLiga brand in the markets national and international, in money for the CSD and to be able to cover the costs of the public systems, for aid to women’s football, Second B, associations and unions.