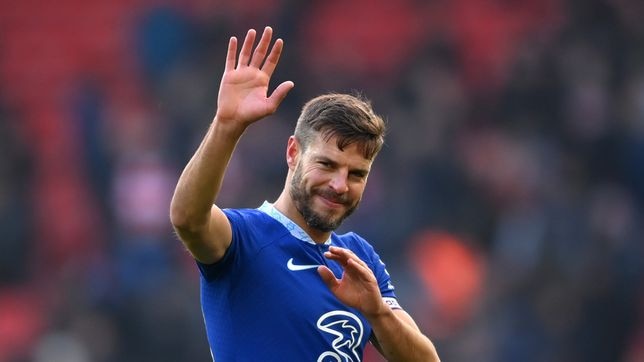 “I have lived long enough, both in years and achievements” is one of the phrases coined for the Roman Emperor Julius Caesar. Although if there is a César who knows about years and achievements (at Chelsea) it is Azpilicueta. The Spanish defender is living history of the London team. A legend. The now 33-year-old footballer, who arrived in the summer of 2012 from Olympique de Marseille as a mere reinforcement for the defense Blue, has reached 500 appearances as a Chelsea player weeks after surpassing an entire institution like Petr Cech as the foreign footballer with the most appearances in the club’s history. Just 10 games away from entering the top 5 of players with the most appearances behind him, César Azpilicueta faces a difficult season at Stamford Bridge, the penultimate of his current contract after extending his relationship until June 2024 last summerwith a role on the field of play different from that of previous courses but with greater weight if possible within the dressing room Blue.

Chelsea paid around eight million euros to Olympique de Marseille to take over the services of César Azpilicueta in the summer of 2012. The Blues They had just been proclaimed European champions for the first time in their history against Bayern Munich months before, with John Terry, David Luiz and Gary Cahill as leaders of the defense, and the Spanish defender arrived to act as central or winger. What many fans of the London team could not imagine, after seeing him play his first 12 minutes in the Chelsea shirt on October 6, 2012 against Norwich City, is the personality that César Azpilicueta would end up becoming. During his first season at Stamford Bridge he played 48 games, 43 of them as a starter.

Although the season did not start entirely well for Chelsea after the dismissal of Roberto Di Matteo, César Azpilicueta’s thing was to arrive and kiss the saint. In addition to gaining a place in the eleven, the Spaniard touched silver upon his arrival in London. The Blues They were knocked out of the Champions League in the group stage, but ended up being proclaimed champions of the 2012/2012 Europa League. Only 25 months as a Chelsea player were enough for the Navarrese to reach 100 appearances with the London team. On October 5, 2014, César Azpilicueta celebrated his centenary Blue with a win against Arsenal 2-0 at Stamford Bridge.

César Azpilicueta was already an immovable piece in José Mourinho’s team. After the departure of Rafa Benítez from the local bench at Stamford Bridge, the Portuguese coach took over the reins of the team. A relationship, that of The Special One and Chelsea, who would only expand the showcases of both the London club and César Azpilicueta himself. The Spaniard, who started 40, 38 and 48 games (of 44, 40 and 49 appearances respectively) during his next three seasons, was one of the leaders of the defense. The same one that broke all records during the 2014/2015 season to proclaim themselves champions of the Premier League and the Carabao Cup. Although in the previous season the Blues they only conceded 27 goals, the 87 points and 32 goals conceded were enough to reign in the top division of English football four years later.

Chelsea also beat Tottenham in the League Cup final, and qualified for the Champions League the following season, but the 2015/2016 campaign ended José Mourinho’s second spell in charge of the London team. The Blues they finished the season in 10th position and the club carried out a deep reconstruction. Although the new project brought with it numerous new faces, starting with that of coach Antonio Conte, there are things that have not changed. Among them, the figure of César Azpilicueta. In the Italian coach’s first season at Stamford Bridge, during which he played 47 games (45 starts) in countless positions, the Navarrese defender reached 200 games. Again with victory. The 0-1 win against Sunderland, in a league competition match played on December 14, 2016, would be another good omen for the end of the season.

On your way to 300 matches as a player Blue, César Azpilicueta ended up proclaiming himself, once again, as champion of England. In his first season as Chelsea manager, 2016/207, Antonio Conte only lost three games in his race for the league title. Once again, the defense would be the protagonist: 33 goals against in 38 games. The Spanish international came to play 99 games under the orders of Antonio Conte, seven less than he wore the Chelsea shirt during José Mourinho’s stage, and in addition to winning the Premier League, they won the 2017/2018 FA Cup champion. The only title that he could not lift, and which is one of the few that remains in his career at the club level, was the Community Shield of that same year, whose final they lost to Arsenal.

If during the passage of Antonio Conte by Stamford Bridge the Spanish defender was important, with the arrival of Maurizio Sarri to the bench Blue this became a capital piece. In 2018/2019 he reached the highest record of his entire career: 57 games played, 53 of them in the starting eleven. Data that allowed him to reach the figure of 300 games as a Chelsea player on December 8, 2018. A 2-0 endorsed the Blues Manchester City at Stamford Bridge on the day that César Azpilicueta was close to the top 20 players with the most caps in the club’s history. As a center back or winger, the Spanish was the Italian’s Swiss Army knife. A season, the only one for the current Lazio coach at Chelsea, who also closed it in the best way.

The Navarrese, who had been the captain of Chelsea for some time, lifted the Europa League champion’s cup to the sky in Baku with the help of Gary Cahill. Another title in his career, and the second continental, but not the last. And it is that the 2020/2021 season, despite the health difficulties incurred worldwide by the COVID-19 pandemic, was very special for César Azpilicueta. After a season and a half as manager, Frank Lampard, who had been a teammate of the Spanish defender at Chelsea, was dismissed and, in the middle of the season, Thomas Tuchel took over the team. With the German as the new captain of the ship BlueChelsea and César Azpilicueta made history.

Although this time andhe Manchester City did manage to spoil the Spanish international’s party, beating Chelsea 3-1 in London on January 3, 2021, the day César Azpilicueta entered the club of 400 games as a player Blue, both the London team and the Navarrese player himself would take their revenge months later. What seemed, in regards to the signing of Thomas Tuchel, an urgent solution in the middle of the 2020/2021 season, finally brought the greatest of glories for Chelsea. From the sky of Baku to the sky of Porto, the trophy lifted on this occasion by the Chelsea captain, César Azpilicueta, was the Champions League. This yes, the first of his career. A win, achieved against the team citizen of Pep Guardiola, who would confirm months later with the achievement of the Club World Cup held in 2022.

With everything and with that, César Azpilicueta still had goals to achieve at Stamford Bridge, especially on a personal level. The Spaniard (47 games and 41 starts) played an important role in the three finals reached by Chelsea during the 2021/2022 season: European Super Cup, FA Cup and Carabao Cup. However, on this occasion, the Navarrese was unable to put on the captain’s armband to lift any title. Villarrea and Liverpool twice beat the Blues in final paths, just as Real Madrid left them at the gates of the semifinals in the last edition of the Champions League that the white team would end up winning.

After a very busy 2022 summer market, in which César Azpilicueta was close to ending his journey as a Chelsea player after 10 seasons to join Xavi Hernández’s new FC Barcelona, ​​the Navarrese ended up expanding his relationship with the London club until June 2024. However, at a collective level, the current 2022/2023 campaign would bring with it several bad news. The departure of Roman Abramovich from the club’s presidency as a result of the war in Ukraine, and the consequent arrival of Todd Boehly as the club’s presidency, was added to the dismissal of Thomas Tuchel as Chelsea manager.. Graham Potter took over, but the results have not quite been with him. Likewise, César Azpilicueta, as a result of the many signings that the new ownership has carried out during the two transfer windows this season, has lost weight in the team: 13 starts in 24 games.

But the Spanish international still had to engrave his name in the history of Chelsea in gold letters. Although Graham Potter’s men were unable to beat Liverpool to a draw, the nine minutes played by César Azpilicueta at Anfield helped him reach half a thousand games as a player Blue. The Spanish defender is, in addition to the sixth footballer in the history of the club that has played the most matches, the foreigner with the most appearances. César Azpilicueta “only” has ahead of John Terry (715 games), Frank Lampard (648), Ron Harris (609), Peter Bonetti (539) and John Hollins (509). In other words, after surpassing the 494 games that Petr Cech defended the Chelsea goal, the Navarrese could end the 2022/2023 season in the top 5 of players with the most games in history Blue. Although the 33-year-old footballer will have to deal with two former teammates and institutions such as Terry and Lampard, his 500 games, which are said to be soon, are already the history of Chelsea, the Premier League and Spanish football.

“I feel very proud, honored and humble to have reached 500 games as a Blue. I have never paid attention to individual achievements, as the group is and will always be the force that drives me forward. However, it is a privilege to be part of a select group of legends…”César Azpilicueta published on his social networks after the game against Jürgen Klopp’s team. And it is this leadership capacity and motivation to help the group that will make the Chelsea captain, whether on the pitch or from the bench, fight until the end of the season to straighten the team’s sporting course and climb one more pedestal. in the London Boxing Hall of Fame.

Betis - Barcelona: Summary, result and goals | Brand
The ping pong to Lionel Messi when he was 20 years old that went viral: his ideal woman, his idol an...
The whip of UEFA threatens Juventus
While others advance, Vinicius lags behind