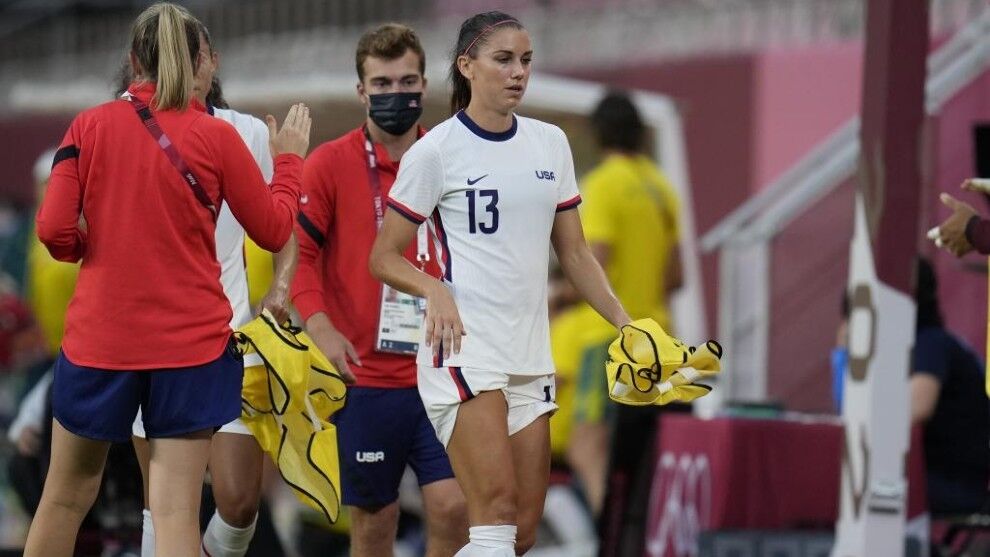 The United States qualified for the quarterfinals of the Olympic tournament as second in Group G after signing a defeat (0-3 against Sweden), a victory (6-1 against New Zealand) and a draw (0-0 against Australia). The team led by Vlatko Andonovski, who leads the Olympic record with four golds and one silver in six editions disputed to date, leaves feelings of being an excessively veteran team (average age 31.18) and lacking in ideas.

“We came with the mentality that the first objective was to win the game and the second was to make a good professional performance,” said the United States coach at a press conference. Although he positively valued the draw – without goals – against the Australians, the truth is that the baggage cannot be positive. Andonovski, who came to the bench in 2019, is beginning to be seriously questioned. “It was a great test for us. We know what we have to do to win the next game,” Vlatko resolved at a press conference.

Reissue of the 2019 World Cup final

The North Americans, who already fell from the medals in Rio de Janeiro five years ago by losing in the quarterfinals to Sweden on penalties, are among the eight best teams in the tournament. The number 1 of the FIFA ranking will now have to cross the Netherlands, a team that resolved their participation in the first phase undefeated as leaders of Group F. The Netherlands, the highest-scoring team in the tournament to date (21 goals), beat Zambia (10-3), drew against Brazil (3-3 ) and defeated China (8-2 *) on the last day. The duel between the United States and the Netherlands It will be the reissue of the 2019 World Cup final in which the Americans won 2-0 in Lyon.

There was no biscotto and the two hopefuls to lead Group F resolved their last match of the group stage with victories. Brazil passed as second by beating Zambia (1-0) and will meet Canada, second in Group E, in the quarterfinals, who lost the victory against Great Britain in the last minutes of their duel (1-1) and ended up closing the first phase with five points.

Sweden goes to the quarter-finals as the first in Group G and with full victories after beating the United States (3-0), Australia (4-2) and New Zealand (2-0) consecutively. The team led by Peter Gerhardsson, silver in Rio 2016 after losing in the final to Germany, made rotations on the last day in order to dose efforts in the group.

The Nordic team will now face Japan, which slipped as the best third after beating Chile on the last day. The local team has been shown as an iron team that leads their matches to be decided by small details: they drew with Canada (1-1), lost to Great Britain (0-1) and beat Chile (1-0).

The British qualified for the quarterfinals as leaders of Group E after beating Chile (2-0) and Japan (1-0) and drawing against Canada (1-1) on the last day. The group led by Hege Riise will now try to overcome the barrier of rooms with which it crashed in London five years ago. In this round, Australia will be measured, one of the best third at the end of the first phase with 4 points after beating New Zealand (2-1), falling to Sweden (2-4) and drawing the United States (0-0).

Australia has yet to pull out the calculator to certify its presence in the quarterfinals. The oceanic team resolves the group stage with four points and will be one of the best third parties unless Japan beat Chile and China beat the Netherlands (victory by more than four goals) on this last day.

Vivianne Miedema (Netherlands) continues to be the main asset to win the Golden Boot of the tournament. The Arsenal striker has scored eight targets in the group stage (four against Zambia, two against Brazil and two against China) and surpasses the record of goals in an Olympic tournament that had the Canadian Christine Sinclair with six goals in London 2012.

The Dutchwoman leads the table of top scorers ahead of Barbra Banda (Zambia), whose selection has been dropped from the Olympic tournament. Below are the five goals of Wang Shuang (China), also out of competition, and the four of Lieke martens (Netherlands). Then they follow them with three Sam kerr (Australia), Lineth beerensteyn (Netherlands) Stina blackstenius (Sweden), Marta Vieira (Brazil), Lieke martens (Netherlands) and Ellen white (Great Britain), all in contention in playoffs.