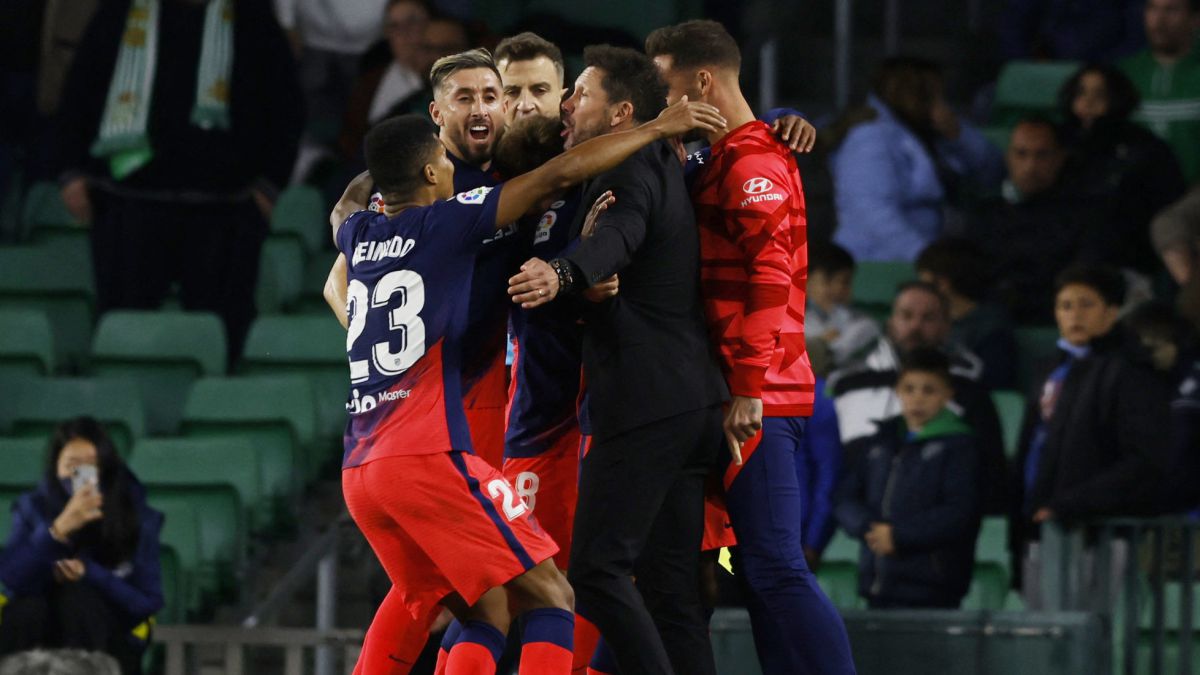 Atleti hit rock bottom on Wednesday, February 16. That Wednesday night, the rojiblanco team lost to Levante, bottom of LaLiga, without firing a single shot on goal, to a Levante that, until that day, had conceded more than 50 goals. Doubts surrounded a team that, for the first time with Cholo Simeone, remembered more than ever the times just before Cholo. Disoriented, lost, weak, accumulating conceded goals (34 Oblak had collected from his net, more than ever), accumulating defeats (seven a third from finishing LaLiga; the most with Cholo it had been eight, in 2012-13 ). The turning point was slipping away, it never quite came. Giménez had said it after the comeback and victory against Valencia, that they needed him. It was not beating Porto on the last day of the Champions League group stage, it was not against Valencia, nor was it after coming back against Getafe. Neither had been the losses. Against Athletic in the Spanish Super Cup in Arabia, 4-2 at the Camp Nou, against Mallorca, against Granada. The catharsis would not come until two days after that Wednesday, on Friday, February 18, in a meeting led by Miguel Ángel Gil Marín with Andrea Berta, sports director, coaching staff and squad. The CEO felt that the team was really collapsing, like never before with Cholo, and he took the reins.

“Great movement of the club in the post-match against Levante so that everything that is happening happens”, which Simeone slipped yesterday, after beating Betis and returning to those Champions positions, the first four classified in the League, which give access to the next Champions, original objective, in bold and underlined of the club, the foundation of everything. That was an open-face meeting, in which everyone said everything. What bothered, what didn’t, what hindered, what failed. The concerns on the table, although, as AS has learned, it was not the only meeting in which managers, staff and coaching staff did so. Try to fix things by saying things to your face. There have been five, six, throughout this season. In one of them, weeks before, in the office of Enrique Cerezo, president, in the Wanda Metropolitano, loud voices could be heard through the windows.

One of the things that the board transferred to the squad, in that meeting after the defeat against Levante, was the money. The salary one. If the team did not qualify for the Champions they would not be the same. Bonuses were not promised, as happened when Atleti experienced a similar situation two years ago, before the match against Liverpool. In this case, a clear truth was put on the table: salaries would suffer a significant reduction if the team did not finish LaLiga in the top four. The income would be drastically reduced, the Champions League represents around 60 million for the teams at the moment, just for being. Failure to do so would have a direct impact on payroll. Nor would the template be the same, of course. Failure to do so would have a direct impact on it: the club would be forced to sell a star. One at least. Surely two. “We have to win this League of five”, Miguel Ángel Gil told the players. And that message stuck. Another cholista phrase had just been born, to the “match by match”: LaLiga de 14.

Another key: meeting between captains and Cholo, Suárez’s bench

The rojiblanco dressing room has never been broken. Tension, yes. Rarified, too. But never completely broken. There have been pieces, however, that have not finished fitting. Transfers. Rodrigo de Paul is an example. Cunha landed on his feet, the Argentine did not. He did not land in the best way, with airs reminiscent of the first Carrasco, with a close relationship with Correa, Suárez and little else. Something that, as AS has learned, has also changed. Dinners in recent weeks between the players have softened that tense relationship. De Paul is fitting in, he is fitting in with the others. And this team needs it. He is a differential footballer.

A meeting between Cholo and his four captains, which had not happened before this season, is another of the things that have happened at Atlético in recent weeks and that cements the improvement palpable of the team (three wins, against Osasuna, Celta and Betis). The coach met Koke, Oblak, Giménez and Savic as he did when Gabi, Godín and Juanfran ruled the locker room. Bare chest. The coach asked for help to intensify his message, his orders, his plans, to the rest of the players on the field. A part of the squad demanded the Argentine to be more offensive with a team designed for it (with players like Lemar, Carrasco, João Félix, Correa, Llorente, Griezmann, Suárez) and that did not hide behind, to defend, when the passage of the days showed again and again their defensive weakness.

After the cares, the reflection. And a change in the team that was played from the same eleven in Osasuna. Until that game, number 24 in the League this 2021-22, Luis Suárez had been a starter in 17. Since then, he has not been again, always a substitute and without gestures, angeras if assuming his new role… But the fact is that footballers who until then had had an almost residual presence (Lodi, Herrera, Vrsaljko) were already the headlines. El Cholo really forgot the names and bet on those who, he believed, could give him performance. It worked. Pamplona, ​​the momentous match against United, Celta, Betis, another momentous match to show that, in effect, Atleti is different, that Atleti is once again the same as always. Last night he already slept on that mattress that he was looking for, the Champions positions. The ground he touched against Levante served him to gain momentum. Up like an arrow.

The report of that meeting