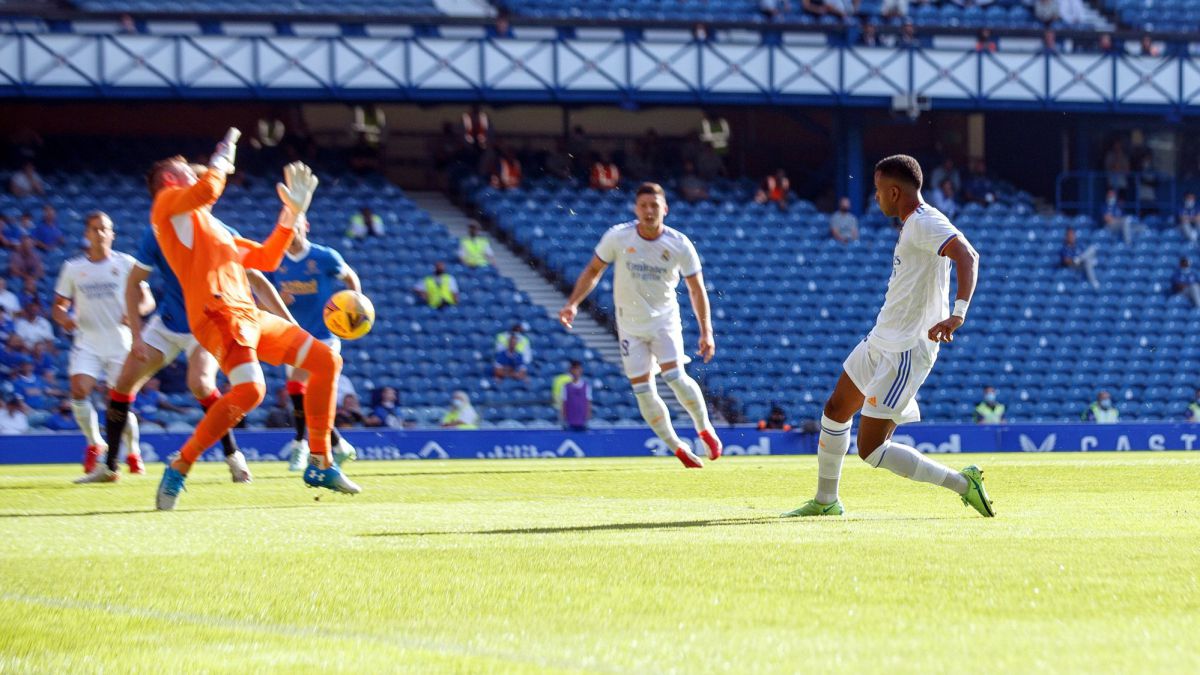 Real Madrid played and lost their first preseason game, a match against Glasgow Rangers (2-1) with very few conclusions to be drawn and with a frankly poor image of the white team in attack: he had the ball only 52% of the time and he barely finished five times, one of them on goal; Gerrard’s did it 21 times, 13 between the three suits. The good news, if there is good news to be learned, is that that only shot from Madrid between sticks was a goal and it was the work of a Rodrygo who started the preseason showing his paw.

The Brazilian was the most intoned attacker of Real Madrid in Scotland, which is not saying too much, but it will certainly help him to convince Ancelotti of the role he can have this course. His goal also showed the virtues with which he can best help the team, ability in the final meters to dribble and temper in the definition, just what his compatriot and friend Vinicius lacks, a ray in the long dribble to which the world collapses when he has to hit the nail on the head.

And yet, with his goal, Rodrygo creates a small ‘problem’ in Madrid, a problem that already exists and of which the club He already has evidence, but it will get worse day by day if he does not find a solution: Rodrygo is from outside the Community, like Militao, Vinicius and Bale, and there are four for a quota of three names. Conclusion: there is one left over and in that struggle, Rodrygo is the weakest link.

The Brazilian arrived from Santos two years ago at the express wish of Juni Calafat, Madrid’s head of international recruitment, and Madrid paid no less than 40 million euros for him when he was only 18 years old. In his two seasons at Madrid, he has shown ease in scoring, but also great seasons of absence and a certain physical weakness that ends up taking its toll. Nine goals and eleven assists in 59 games for white is a rather scarce background.

And its competitors for the three non-EU positions present more powerful credentials, at least on paper: Militao cost 50 million and this season, without Ramos and probably without Varane, it must be his consecration; Bale only has one year left on his contract and he is determined to fulfill it, apart from the fact that starting it is complicated, with that salary of 30 million gross per year that weighs like a slab; and Vinicius has also left doubts, but in the club they seem to bet on him without fissures and his qualities, of great dribbler and counter-puncher, they are not abundant in the squad and Ancelotti will surely want to have them at hand.

However, Madrid expects a resolution to the problem of non-EU citizens that will help the four of them stay on the squad. Bale had been a community member, but the departure of the United Kingdom from the European Union has removed that condition and, for the moment, does not count as a European foreigner. In the club they believe that this community condition will end up being prolonged for players who already had signed contracts before Brexit (in the League there are only two, Bale and Trippier, from Atleti), but if it ends up not happening, Madrid will have to seek accommodation to one of the four and there Rodrygo has the upper hand to lose. For now, he does his job and shows Ancelotti that if he doesn’t stay, it won’t be for lack of level.