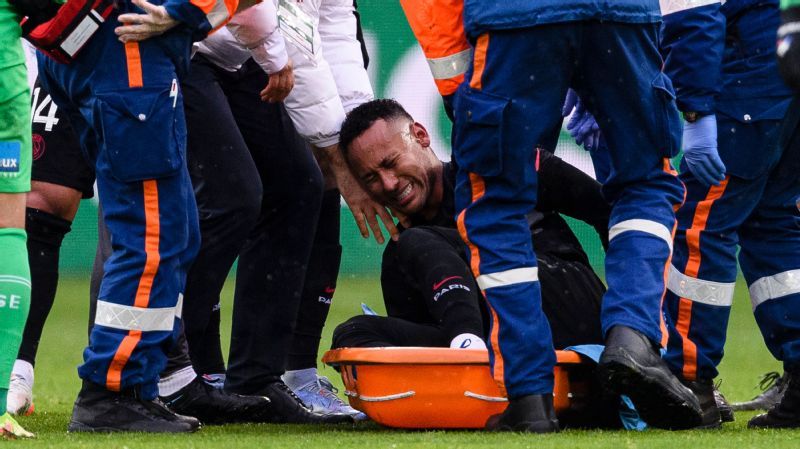 At least he is now truly familiar with the place. Once again, as has happened so many times since he left Barcelona for Paris Saint-Germain in the summer of 2017; Neymar He will travel to Doha, Qatar, to undergo a rehabilitation process at the Aspetar clinic for an ankle injury. It is the sixth time in the last four years that he has suffered an injury that requires such treatment and attention from specialists (which is why he went to Aspetar), which will keep him out of action for a good number of weeks.

This time, the incident that caused the trauma was due to bad luck. During the 3-1 victory in his visit to Saint-Etienne, the defender Yvann macon he looked for the remove, without reaching Neymar or the ball. However, the Brazil national team forward stepped on Macon’s ankle, twisting his. The ligament in your ankle was damaged and will be low for up to eight weeks.

Neymar’s problems with injuries are widely known. The first two were serious, suffering metatarsal fractures in his right foot: the first in February 2018, just six months after arriving in Paris, ending his season (absent from a total of 16 games); while the second occurred a year later, specifically in January 2019, which forced him to be out of action in another 19 games, recovering to play a part during the final three weeks of the campaign.

A year ago, Neymar injured his left ankle, missing five weeks and five games of activity as a result of the injury. He was out of action for a period of two months and nine games after a groin injury in February 2021 and before that, he tore his right ankle ligaments playing for Seleçao, forcing him to leave the field for three months ( between June and September 2019).

In total, if we add these injuries plus different minor annoyances, Neymar has stopped playing 91 PSG games so far. This has always been the subject of debate, especially when we talk about a player who was rarely injured in the four years he spent at the Camp Nou, in which he was only absent in 29 games.

What happened? To begin with, Neymar is getting older. The gunner will turn 30 next February. If we take into account that he started playing professional soccer when he was 16 years old, his humanity already carries with it 14 years of effort, intensity, blows, kicks and pain in general. You’ve probably played too much soccer already and now, your body is more fragile than ever. That accumulation of injuries doesn’t help him either.

If we look back at the litany of injuries suffered by Neymar, they frequently affect the same parts of his body: foot, metatarsal, ankle, groin. The same areas that have never fully healed and are therefore more likely to be injured again. This is of course a cause for concern and PSG is trying to find a way to avoid such injuries in the best possible way. They have to take care of Neymar’s body as much as they can, and he must help them too. All the invisible work (things such as recovery, rest and nutrition) will be more important than ever for the Brazilian ’10’. After all, Neymar begins a critical stage in his career.

Last May, Neymar finally signed a new contract that ties him to PSG until 2025, with the option of an extra year. That’s a long time, and to make the most of the years to come, your fitness will be key. Ney is aware of this: newspaper reports indicated that the player did not like the criticism regarding his excess weight during the summer. It took a while to regain his best physical level, and also to be the best version of himself on the court. The injury occurred in the match against Saint-Etienne, just when he was reaching that optimum level.

Within Neymar’s environment, there is a feeling that bad luck has something to do with the forward’s current situation. However, PSG is not worried. In the offices of the Parisian team they hope that Neymar is back, in full condition and ready to play the key Champions League games, with the first leg of his round of 16 bracket scheduled for February 15 or 16, while the return would be the 22 or 23 of that same month; as well as the crucial phase of the Ligue 1 tournament (they will visit Lille on February 6). Meanwhile, DT Mauricio Pochettino will have to resolve without his presence.

Could this be a good opportunity to try something different? The PSG coach could simply replace Neymar with Angel Di Maria; although you could also try to get more balance in your team and play with a 3-5-2 system now that Sergio Ramos is back, with Kylian Mbappé and Lionel messi (the 3 and 1 forwards, respectively, in our 2021 ESPN FC 100 rankings) up front. Or maybe even a 4-4-2 formation with a diamond midfield and Messi behind Mbappé and Mauro Icardi; or a 4-4-2 flat with Messi on top, making a double with the French star.

Pochettino and PSG have multiple options, now that Neymar will be forced to witness the action from the stands, seeing how his team handles his absence. Without a doubt, they will miss Neymar; sadly, his squad is used to playing without him.

Neymar’s most recent injury comes at the worst possible moment