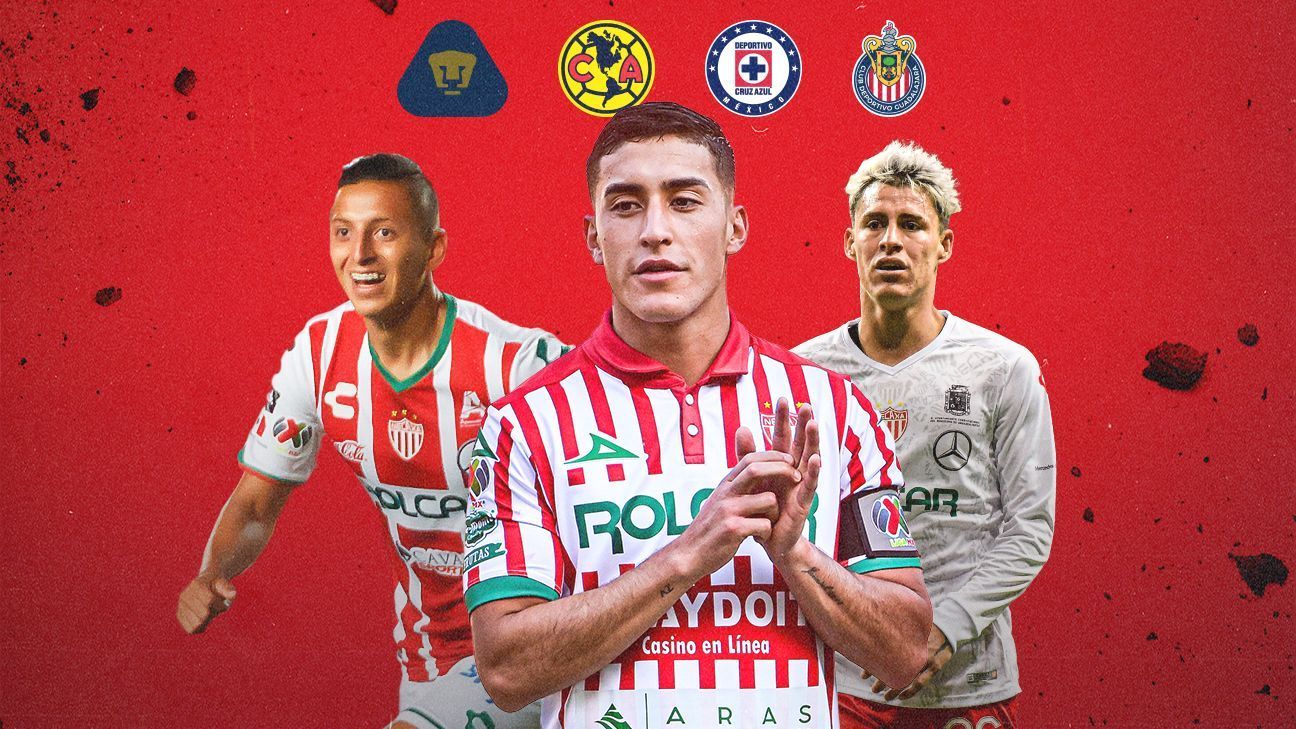 The Rayos have been in charge of strengthening America, Cruz Azul, Chivas and Pumas in recent years

Necaxa it has become a branch of the big four of Mexican soccer. The Rayos have transferred 10 elements to América, Chivas, Cruz Azul or Pumas from 2018 to date with the movement made by those from Aguascalientes so that Alejandro Zendejas came to reinforce the Eagles for Clausura 2022.

then in ESPNDigital We present the players from whom the Rayos have come off to strengthen the so-called greats of Liga MX:

The ‘Bear’ went from the basic forces of Chivas to Necaxa at the beginning of 2018, but a year and a half later he arrived in America. With the Eagles he did not have the expected continuity and only participated in 43 duels in the two years of azulcrema, so he joined León for 2021 and is currently with the Rayos in his second stage.

It is the last negotiation that Necaxa has had with the greats of Mexican soccer. Zendejas was bought by Chivas in 2016, but in the summer of 2020 he moved to Necaxa, a team with which he played 50 games with 11 goals and two assists before signing with América for Clausura 2022.

The soccer player arrived at Chivas for the Clausura 2020, after with Necaxa he added four goals and four assists in the 44 duels he played. However, Dieter left Guadalajara in the 2020 Opening due to indiscipline issues. Villalpando participated in 46 duels with the Tapatíos, with whom he scored two goals and another four assists.

The ‘Chicote’ shone in the year he was with Necaxa, a team he defended during 2019, with 37 duels, 10 goals and three assists. For 2020, he joined the ranks of Guadalajara, with whom he has played 44 games in which he has scored six goals, in addition to giving a pass for his teammates to score.

He went from ‘Canelo’ to Necaxa for barely six months. He arrived in the summer of 2019 and began 2020 as a soccer player for Chivas, the club in which he currently plays. With Guadalajara, Angulo has played 65 matches, in which he has scored eight goals, in addition to four assists.

The forged in the basic forces of Pachuca arrived in Necaxa for 2019, but he only spent a year with the Rayos, since 2020 began as a Chivas footballer, the team to which he currently belongs. He has only played one duel with the Guadalajara first team, because during 2021 he was on loan with Cruz Azul, a team that invalidated the purchase option and is currently without a club.

The Chilean defender arrived in Mexican soccer in mid-2017, at which time he signed a contract with Necaxa from Porto de Portugal. After an outstanding year with the Rayos, Lichnovsky moved to Cruz Azul for the Apertura 2018. He spent two years in the ranks of the Machine, with which he won a Copa MX and a Supercopa MX, before leaving for Saudi Arabia with Al -Shabab.

The Rayos rescued “Piojo” after he had not had much activity with Pachuca for six months. Alvarado signed with Necaxa for the 2017 Apertura, but he only spent a year with the Aguascalientes team, since in the summer of 2018 he went to Cruz Azul, with whom he won four titles, including a Liga MX. The soccer player went to Chivas for Clausura 2022, after he scored 19 goals in the 144 games he played with the Machine.

The attacker arrived in the ranks of Necaxa in the summer of 2017, coming from Huachipato. However, the level he showed in the year he was in the Aguascalientes team led him to Pumas for the 2018 Apertura. With the Rayos he scored 11 goals in 36 games; while in the two and a half years he was with the UNAM squad, he scored 34 goals in 92 matches, before signing with Tigres, his current team.

The midfielder went from the Pumas youth academy to the basic forces of Necaxa in the summer of 2018. Lira made his debut with the Rayos, with whom he played three games. He spent two years with those from Aguascalientes, because by 2020 he re-signed a contract with the UNAM squad. The midfielder left the felines again in 2022 when he arrived at Cruz Azul.

Necaxa, the provider of reinforcements for the big four since 2018