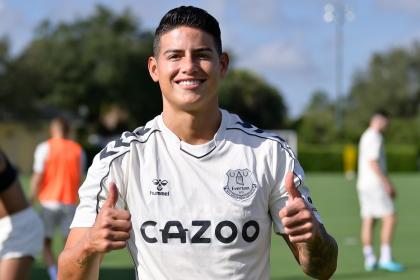 64′- Pumas begins to leave many spaces. Broadhead advances with total freedom on the right, sends a center back that connects Doucouré and the ball goes near the left vertical.

62′- James’ first try. Left-handed with a thread from the right that goes astray.

59′- Great individual play by young Broadhead. He left his marker on the road with a good dribble, eluded the rival goalkeeper, but was left without an angle and ended up winning a corner kick.

57′- Another possibility for Dinenno. Great reception with the chest, half-turn and flush shot, but the ball goes slightly off track.

48′- James’ first participation. He received a ball from the right, tried a front level pass to the area, but Gordon did not reach it.

The first half ends with a partial victory for Everton, thanks to the score by Moise Kean. Everton 1-0 Cougars.

40′- Dinenno appears again. A distant shot that crashes into the rival defense and ends in the corner kick. In the subsequent collection, Nicolás Freire almost matched the shares.

32′- Great individual play by Séamus Coleman for the right sector, a rained center that Kean returned with a half volley, but a defender intervenes. The ball hit the Mexican’s hand, but the referee doesn’t see anything and lets continue.

30′- The pace of the game drops considerably. Pumas tries to come out with a collective game, overcomes the rival’s midfield, but Dinenno appears very alone.

19′- Everton goal! Great deep pass from Demarai Gray that could not cut the rival defense, Kean finished hand in hand with González, the goalkeeper saved, but the rebound was served by the Italian to open the account. Everton 1-0 Cougars.

10′- Even duel in the first minutes. Everton controls, but does not translate that into clear goal options. Pumas appeals, for now, to the backlash.

2′- Everton’s first approach. Center to the area that connects Moise Kean with a volley, but goalkeeper Julio José González saves.

This is how the dressing rooms are, prior to the start of the game

This is how both teams form