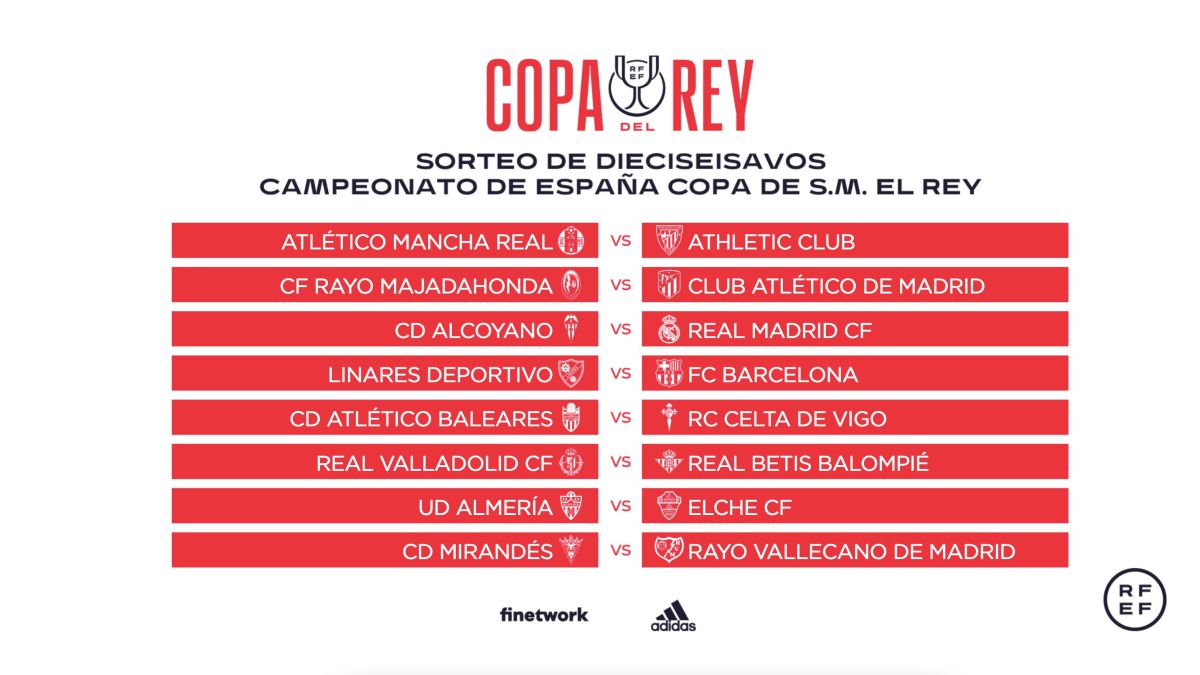 They are already here. They are not magicians, but yes They are the Kings of the Copa del Rey. Real Madrid, Barcelona, ​​Atlético and Athletic make their debut in the KO tournament this season. In Alcoy, the draw was lived with the same enthusiasm as when the Niños de San Ildefonso are seen drawing the numbers for the Christmas Lottery. Y is that Alcoyano has taken the Fat, the Fat Man of the Cup. Real Madrid, leader of LaLiga. Again and what brings bad memories to whites. The other great prizes were distributed by different areas of Spain. Barcelona will visit Linares; Atlético, at Majadahonda; and Athletic, to Mancha Real.

The sixteenth, which They will be played on January 4, 5 and 6 as a single match, they are a special round. The tournament is starting to get complicated. Enter the four most successful clubs in the tournament: Barcelona (31 titles), Athletic (23), Real Madrid (19) and Atlético (10). All four make their debut in the competition after the first two rounds were exempt as a prize for qualifying for the Spanish Super Cup. They finished passing the round without playing and now they have to put on their boots against four ‘giant killers’ in sixteenths. Four modest clubs that heroically eliminated First and Second Division teams in the last tie. It was like that because the draw was still not pure: it was conditioned by giving the Super Cup the privilege of facing the most modest who were still alive. Yes indeed, They will have to act as visitors traveling to the stadium of the lower category rival in a round that will continue without the VAR.

The draw was not pure, since it was conditioned so that the most modest were measured against the largest. In this way, the result of the ceremony left the following crosses:

A First RFEF against a First Division

First leg of the semifinals: February 9.

Round of semifinals: March 2nd.