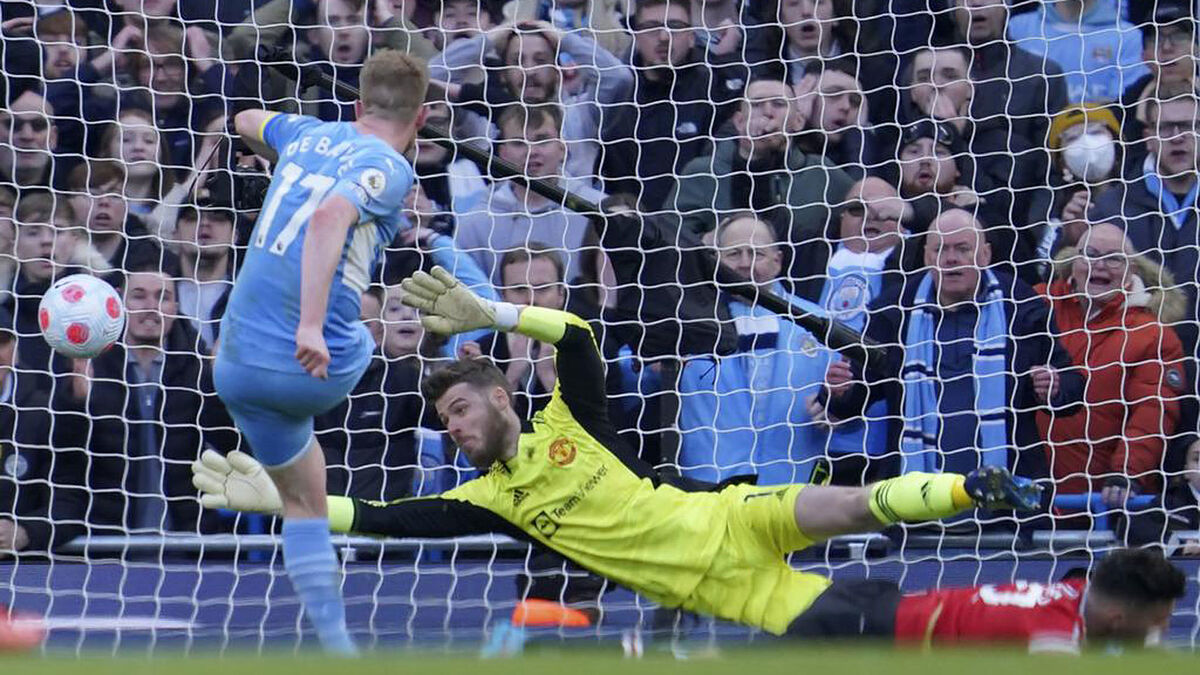 The distance between Manchester City and Manchester United is no longer counted in kilometers. They share a city but they are in another football dimension. Sir Alex Ferguson contained in his last years a ‘celestial’ takeoff that has made the role of ‘second’ has changed neighborhoods.

A gap that this season’s derbies have shown. Winning the previous three in enemy territory did not change the ‘red devil’ dynamic. While Pep Guardiola’s men are favorites for the Premier and the Champions League, Ralf Rangnick’s men are fighting not to be left out of the Champions League. And it’s not just a matter of millions. One has a Mercedes and the other a Red Bull parked in his garage, although the difference, as in Formula 1, is made by the driver. Always the pilot.

And there is no better ‘driver’ than Kevin De Bruyne. Manchester has a king and it is KDB. Long live Cantona! The Belgian signed a diabolical display that brought United down to hell. City won the derby with a landslide (4-1) keeping Liverpool at bay. The six-point advantage in the lead is once again a reality for the Pep Guardiola team. Jrgen Klopp, from his sofa in Liverpool, saw how the first of the Premier acted as such. They will have to win many games in a row to reach the Etihad with options.

Without Cristiano Ronaldo or Cavani, Rangnick dusted off his ‘gegenpressing’ with Pogba as a false ‘9’ and tried to drown City with his pressure. A brave bet, seeking to get the ball played from their field, which Atltico de Madrid did not lose sight of for the return leg of the round of 16. However, the risk was extremely high and penalized by the ‘sky blues’. Five minutes later, Bernardo Silva and Grealish ‘dizzy’ Wan-Bissaka on the right wing before take out a cross that De Bruyne converted, coming from behind, at 1-0.

KDB’s 50th goal in the Premier did not ‘disconnect’ a United that continued with its plan. High blood pressure and running. Nor did they try to discuss the possession of a City that did not have the ball so much at the beginning. And in that ecosystem, Sancho complied with the law of the former. The ‘wonderkid’ who left the sky-blue factory to take shape in Dortmund scored a great goal. He received the leather from Pogba, profiled himself, got rid of Rodri and scored the 1-1. He looked at the stands, so familiar from his childhood, booing him defiantly. He had already ‘bittered’ them.

The tie was a mirage. Six minutes into the equalizer, another bad ball exit from United was punished by De Bruyne. Foden made Lindelf a hat to remember and shot on goal. A poster for the rooms of ‘cityzen’ children who dream of succeeding at the Etihad. De Gea avoided his target but not the Belgian’s, who after several rebounds completed his double. The Spanish goalkeeper had a lot of work and got a good grade despite the thrashing he received. He made four saves (Foden, Mahrez, twice, and Cancelo) high.

The visiting wear of the first part had no reward and demoralized the ‘red devils’. United ran out of batteries in the second and City penalized their audacity. They smelled their weariness and swept them away. De Bruyne put in a corner that Mahrez first converted to make it 3-1. A winning shot. The Algerian made it 4-1 in a counterattack in which he bordered on offside. The VAR validated his target closing a second half in which United did not even shoot. They chased shadows, they only saw the ball in a photo and they got tired of being shot at their goal. Pum, Pum, Pum.

De Bruyne and Mahrez turned the victory into a landslide (Pep’s 50th in the Premier) that stung at Old Trafford. De Gea could not avoid the shower of targets. The ‘big ones’ have taken the pleasure of beating up a ‘ManU.’ who is already fifth, outside the Champions zone. Liverpool scored five and City four. A cross that has no end. Manchester is light blue… and it’s no longer news.