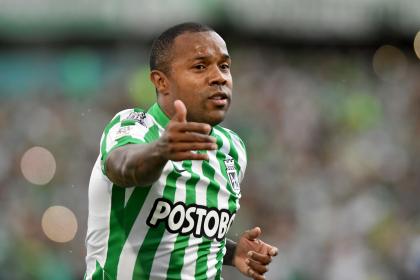 Exciting classic of greens in dry palm. Deportivo Cali, urgent for good results, receives a Nacional that appears in the table as the leader’s escort.

Emotions came extremely quickly to the Valle del Cauca capital and in FOOTBALL we revive them:

The first clear opportunity of the match came thanks to the recklessness of Danovis Banguero. After a flurry in the vedolaga area, Kevin Velasco controlled and wanting to settle, the left back knocked him down. The central judge sanctioned the maximum penalty and from the VAR they reaffirmed their decision.

Teófilo Gutiérrez, who was coming off a suspension, signed his comeback with a goal. Cross shot that Aldair Quintana almost reached.

The second entry came through aerial play and this time Teo dressed as an assistant. The ex-Junior lifted a cross from the right flank, behind everyone appeared Guillermo Burdisso with an imperial header.

Quintana tried to stop the shot, but after the first impact on his body the ball escaped him and slowly entered his goal. He could have done more as a goalkeeper.

The third appeared after half an hour thanks to another genius of Teo. The Barranquilla player leaked a sensational pass for Yony González who hit the void in total solitude and defined.

Although the shot went to the body of Quintana, it was played to his left post before the attacker kicked and the ball ended up hitting him and entering. Again engaged in a rival goal…

At the end of the game, the Antioqueños revived. Gio Moreno captured a ball inside the sugar area and took a shot at the near post by Humberto Acevedo. He once again celebrates the creative from Antioquia at the FPC.

Another controversy in which the VAR influenced. After a corner kick, Sebastián Gómez finished off bitten on the edge of the area and the ball hit the arm of the youthful Yimmi Andrés Congo. The discussion happened because the steering wheel was on the grass and precisely the ball gives his support arm.

After several minutes of review, the judge sanctioned the maximum penalty. Dorlan took over and finished off the cross with great power. Acevedo almost brushes it. Action similar to that of Teo and Quintana in the first half.

Minutes before Teo missed a maximum penalty, now it was Nacional’s turn again. Penalties for everyone in Palmaseca. Daniel Mantilla ran into the void and upon entering the area he was shot down by goalkeeper Humberto Acevedo.

The central judge immediately sanctioned an infraction and admonished Acevedo. Once again they took all the time in the world to review the action and it was determined to collect the penalty. Dorlan took over and broke the arc with a superb right hand midway through. All on boards.

Controversy and many goals: Cali scored but Nacional revived with Dorlan