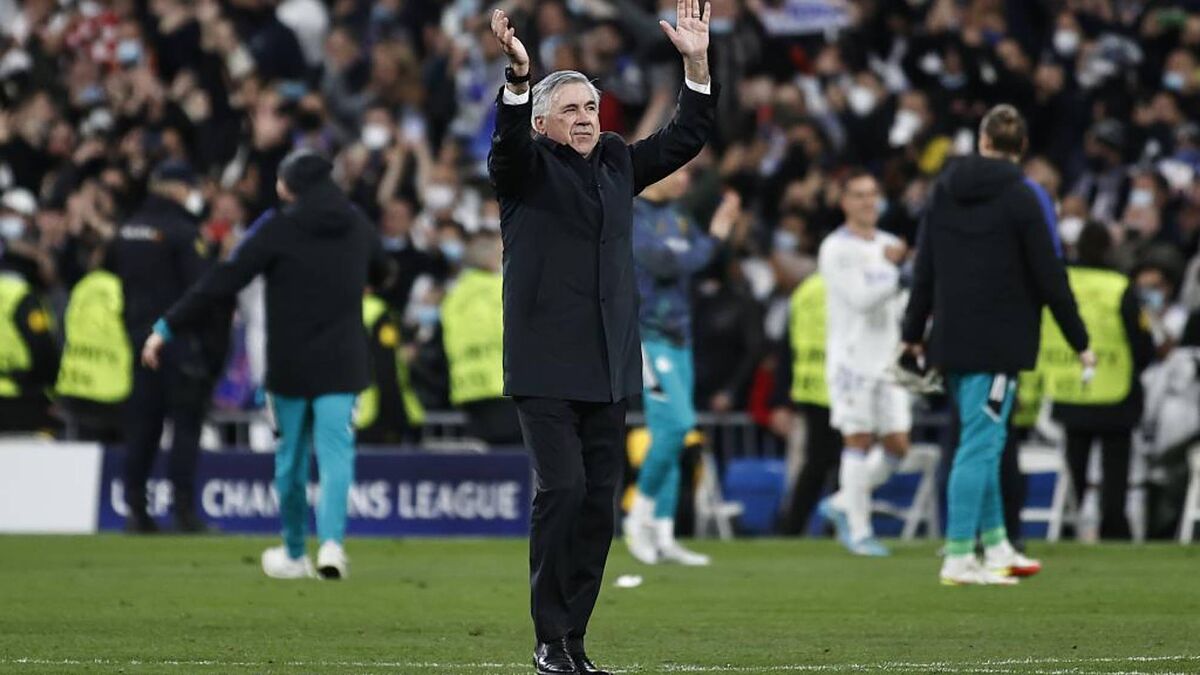 ANDThere is an unwritten law at Real Madrid that says that “the coach who doesn’t win trophies leaves the club at the end of the season”. The phrase was repeated over and over again. Zinedine Zidane and he was in charge of strictly fulfilling it last summer when after not winning a single title he decided to leave office. Ancelotti is no stranger to this policy of the Real Madrid so demanding. He suffered it in 2015 despite having won the Tenth in 2014 and that is why this season he is going “piano piano” when talking about his future. He prefers to enjoy the present, which he is doing.

During the last few weeks, especially after falling into Bilbao in the Cup and Paris in the Champions League, doubts had settled on the Madrid bench for the future. Madrid ruled with an iron fist in LaLiga, but a setback in the Champions League would definitely have put Ancelotti in the trigger. The level of criticism and the demand of Madrid is such that not even the League championship cushions big falls in Europe on occasions. Today, however, on March 11, the situation at Real Madrid is one of absolute happiness. Valdebebas is a spa and satisfaction reigns in all departments of the club.

There is no longer any doubt that Ancelotti has earned his continuity for next season. Zero doubts. It is understood that Madrid will finish closing LaLiga and look optimistically at the horizon in the Champions League. The comeback against PSG has left Carletto as the great winner in the duel against a coach who always sounds for Madrid, a Mauricio Pochettino who seems not to continue at PSG and who, one more summer, will see how his deadlines do not fit with those of Real Madrid.

Ancelotti knew what was at stake against him PSGespecially after the first leg. The Italian detected that there was some fear after the defeat and decided to lock himself up with his players to find a solution to the football problems that PSG and Athletic had raised. “Let’s press higher”, Ancelotti announced after speaking with the heavyweights and feeling what they felt in the club. The decision, of her position, was not made from the start. populism yes from the conviction after speaking with the entire technical body and the locker room. And the formula, there is no doubt, has reinvigorated the team.

EVOLUTION OF THE PLAN

Taking advantage of the physical problems of some players like Kroos and Casemiro’s suspension, Ancelotti has been increasing Fede and Camavinga’s playing time in recent games. And the two most vigorous footballers in the squad have responded wonderfully. In situations of maximum tension, they have played with poise and personality, especially the Uruguayan, who has shown that the starting line-up does not weigh him down.

smile relieved Ancelotti after overcoming this first head-to-head in a double match of the Champions League and is now focused on The league, the title has more at hand to get. The coach already made it clear in the run-up to the match against PSG that he is very satisfied with the team’s performance and that the continuous “buts” that are put in the way of the team annoy. Ancelotti review the season and hallucinate with doubts: outstanding leader with a 15-point advantage over Bara and eight over the second, champion of the Spanish Super Cup and in the quarterfinals of the Champions League after a comeback for history. If you look back to August 31, when you couldn’t sign mbpp and it seemed that the world of Madrid was coming to an end, he considers that the team is much higher than the fans themselves thought.

Ancelotti, however, knows that there is still a long way to go this season. LaLiga must be finished off and in the Champions League, Madrid’s history requires going beyond the quarterfinals. But he trusts Carletto in the block that he has created and in the communion between the team and the stands, the best that has been remembered in a long time. Among other things, because he, as a great group manager, has been in charge of promoting it.