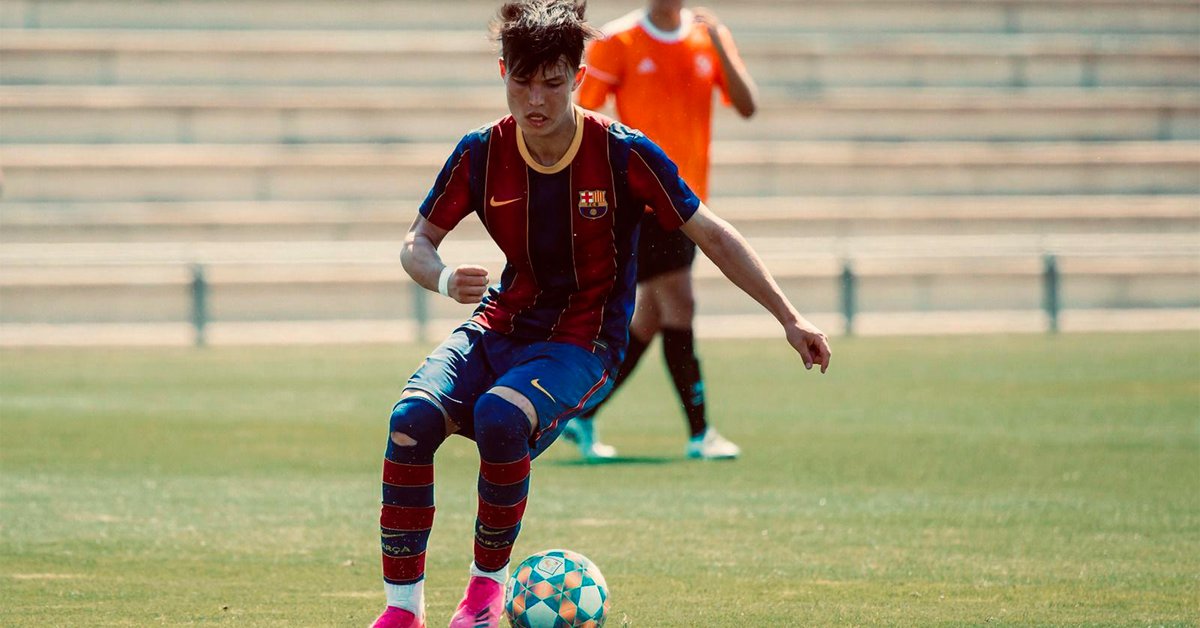 Argentina, year 1976. Months after the Military Junta made up of Jorge Rafael Videla, Emilio Massera and Orlando Agosti overthrew the Government of María Estela Martínez de Perón, the Cendagorta family, a native of La Plata, decided to go into exile in Spain. Federico, 6 years old, gets on a boat with his parents and three brothers. He begins an adventure that would change him forever and he would put down roots in Barcelona. Childhood, adolescence and maturity, all on Catalan soil. He no longer returned to Argentina and built his history on the other side of the Atlantic.

In another corner of the world, more precisely in Japan, Kaori takahashi takes courage and decides to move to the UK to study English. There she became a partner with a Spaniard with whom she moved to Catalonia indefinitely. After breaking their relationship, fate crossed her with Federico Cendagorta, who had two children and had also separated. Fruit of his love, on August 17, 2005 he was born Niko Takahashi Cendagorta, one of the great promises that Barcelona has today in its quarry and that is sought by the national teams Spain, Argentina and Japan.

Niko visiting the Camp Nou when he was little

Niko dared to share his story for the first time with an Argentine media. Already participated in some zoom with other players and coaches from Buenos Aires and was even recorded a couple of years ago by Japanese television, but with Infobae He recounted his life like never before and shared his wishes to succeed in soccer. The 15-year-old promise began to “kick” balls since he was just 10 or 11 months old and felt a definite crush on the ball at the age of 4, when he joined the futsal team of the town of La Floresta, in San Cugat, in the one played by a friend from kindergarten. His mother took him, and with complete naturalness he went into the pavilion to kick the ball.

After having taken his first steps in football indoor, it was time to jump onto the grass. He was a year in a Blaugrana peña of Barcelona until he signed him San Cugat, a team from the region in which he played for two years. Their conditions strongly attracted the attention of Girona and the Cornellá, for which he was inclined by a question of proximity. It was enough that he exhibited his dynamic and exquisite left foot in a single season to receive a new call from Girona, but also from Espanyol and from Barcelona, a team he has been a fan of since he started playing soccer: “I remember one day we went to a restaurant for dinner with my parents and they told me that those teams had called. I didn’t think twice. Is that Barça is the one I follow since I was little”.

Thus, Niko went from going to the Camp Nou as a fan to having a free income for being a youth soccer player of the institution: “Being in a club like Barcelona is a privilege and a dream. But I’m not satisfied with that, I want to go for more, I want to extend that dream. The facilities are very good, the medical center, the staff, everything there. Such a big club must have the best facilities, and that’s the way it is ”. The young Catalan divides his day between school, private classes (in the club they require him to have all the subjects passed) and training, which takes you to be active from 6:30 a.m. to 9:15 p.m., when he returns home in a taxi provided by the club. In addition, he complements soccer practices with hours at a chain gym in his neighborhood.

He lives a week with his father, who in Argentina is a fan of Gimnasia La Plata, and another week at his mother’s house. Frederick he works in construction and does not miss any of Niko’s games as long as work schedules allow him to; Kaori, who has a shop in Barcelona, ​​only goes local because he is a little afraid of the speed of cars on the road. Apart from his family, the talented left-handed culé always has his friend and confidant Adriá Piñas by his side. That is the one who, he says, will accompany him whether he wins or loses.

Niko Takahashi Cendagorta He has just become champion in the Cadet A category, and next year he will go to Youth (if he is not promoted before 2022, as happened with two colleagues from 2005 like him). The usual projection indicates that after three years in the Youth it is the turn to make the leap to the Subsidiary team, which would be the Reserve of a professional team in Argentina. The coronavirus pandemic deprived the boys of Barcelona from competing at an international level this year (many trips were canceled, including one to Dubai) although Niko came to enjoy various experiences and friction with teams of the stature of the Ajax, Schalke, Bayern Munich and Borussia Dortmund. They won tournaments in Russia, Germany and Belarus. At the local level they were measured sporadically with Real and Atlético Madrid, since until now the competition in their category faces them with rivals from the Catalan region.

Niko and Kaori, as Barça fans at the legendary Camp Nou

It was in 2020 when Japanese emissaries looked at him and called him to participate in a tour of the Asian national team in Murcia. There they would compete in a home run with the teams of Spain, Brazil and England. However, the confinement by COVID-19 disrupted the plan to wear the oriental insignia.

Last May, coach David Gordo called him to the Spanish team for the first time, together with his teammates from Barcelona Aarón Alonso, Sergi Domínguez, Iker Bravo and Jorge Javier Espinal, for a micro-cycle of work that took place in Marbella: “The coach had spoken to me but I did not expect to be. It is a privilege, a luck to be able to be there. I enjoyed it a lot”. Now he is waiting for the next call for a tournament in which Spain will compete with Mexico, Germany and France in August.

His ties with Argentina

Another issue that Niko had pending was traveling to South America to learn about his roots. He went to Japan almost every year with his mother, with the exception of the last two (for pandemic reasons). He knows many Argentine uncles who went to Spain to visit at some point, but he is looking forward to flying to the place where his father was born soon.

How much do you know about Argentine customs? He recognizes mate because his father consumes it a lot and even he himself likes the Creole infusion, which he does not abuse because he suffers from atopic skin and its intake can bring him inconvenience. Of course, he has a weakness for dulce de leche (he says “it’s a bomb”), for alfajores other than chocolate and for bananita dolca. In the salty category, it leans towards the roasts, the empanadas and the chimichurri.

Niko poses with his father, Federico, after playing a game for Barça

If they ask him how many teams he knows about Argentine soccer, he mentions Boca, River and Newell’s, by Messi. He also names La Plata (referring to the Wolf, because of his father’s sympathy with Gimnasia), and states that if he connects the PlayStation and sees the shields, he can list many more. Be careful, he plays video games less and less, more than anything when he receives some friends, since despite his young age he already has a professional mentality. In fact, due to his football qualities and discipline, the Adidas firm has already signed a sponsorship contract with him.

“Whenever I can I go out with friends, although I am quite lazy. I’d rather stay home or go to the gym. Of my friends the best is Adriá, I know that he will be there if I do well or badly. He comes to all my games, he never fails, “he said. At lunchtime, he also takes precautions: he consults with the club’s nutritionist, which is optional, and collected some guidelines that were provided to him on his excursion with the Spanish team. “I try to eat balanced, it’s true that there are days when I don’t have a game and I can eat barbecue, pizza or whatever, but before games it’s always pasta, fish or fruit”, he clarified.

From an idol he has to Lionel messi, which debuted a year before he was born. But when it comes to pointing out a reference in his position, he stays with Jordi Alba: “In futsal I played everything, on grass they put me as center-back, and in the Sancu (San Cugat) I played winger. Some games I was as a winger, but usually I’m a winger ”. He already met Messi and Alba at the Joan Gamper Sports City and logically asked them for a photo. Now he trusts that the Argentine captain will renew his contract and hopes to take a selfie with him Kun Omen, one of the brand new reinforcements of Ronald Koeman’s team.

It was after a match between Cadet A of Barcelona and Girona, about a month ago, when an emissary from the Argentine national team approached him to greet him and ask him if he would like to join the ranks albicelestes. Niko, between surprised and motivated, referred him to his father and his representative, José Pepe Serer, a former Athletic Bilbao, Barça and Valencia player, among others. “He is a boy and is in a great moment, I do not venture to say where he is going to play. Argentina is very big, but he will have to decide it ”, assured his father.

The Catalan jewel with Argento-Japanese blood also contributed her reflection regarding her eligibility in three selected teams from different continents, and did not close the door to any: “I would like to play with all three teams. Try and look around a bit. I already tried the Spanish one. I would like to do it with the others to choose where I feel most comfortable. Nor do I want to be always changing, but I would like to try and, where I think I am better, then stay. Since I am lucky to have triple nationality, I want to take advantage of it ”.

The memories of Juan Carlos Olave: the chaotic last meeting with his cousin Rodrigo, his role as substitute and executioner of River, and how he overcame the 0-7 against Estudiantes
Lucas Castromán, from the frustrated dream of playing a World Cup to retiring young because he was fed up with football: “I spent 4 years without watching a game”