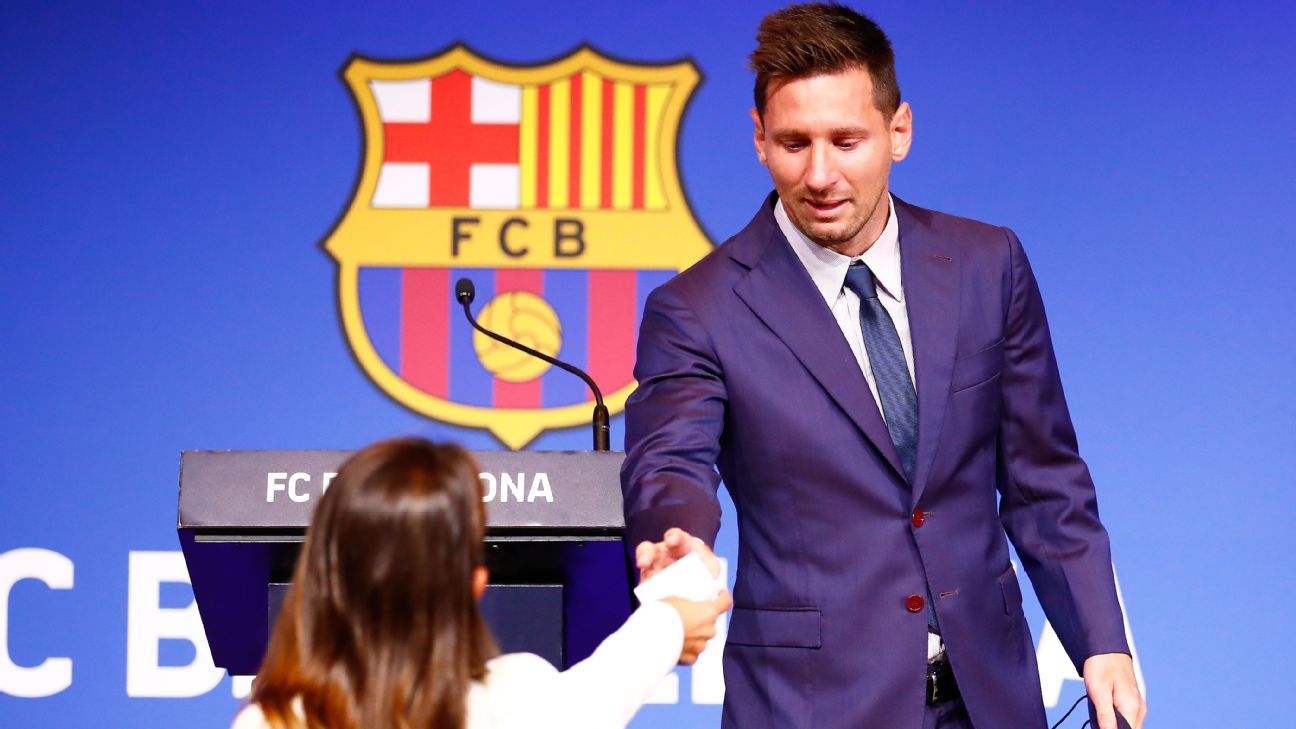 BARCELONA – Leo Messi will not wear the Barcelona shirt again and this unthinkable reality is already certain around a Camp Nou that is still incredulous and in shock since the club issued the statement of goodbye on Thursday afternoon.

Clinging to theories of all kinds, journalists and fans maintained the hope that that cold three-paragraph statement was just another chapter in the novel … As the hours passed, it was discovered that it was not. There was no trap or cardboard.

“It is not a play. Leo is leaving,” explained ESPN Deportes from the club; “It’s over,” said a source close to the player. The incredulity of the environment was similar from Thursday to that of Messi. They did not let him leave in August 2020, when he tried in every way, with more heart than head and probably poorly advised, and they invited him to leave after a year when his wish is to stay.

He stayed with a president Bartomeu with whom you could not even see and he left with Laporta at the head of the club. With the president who had the best relationship during his sports career … Until it seemed not so much.

Leo was cold and distant with Laporta, whom he referred to as “the president” when not simply “Laporta”, without any kind of proximity. And he was more silent than he spoke, although he understood everything in the speech.

“I did everything possible to stay and I don’t know if the club did,” the Argentine said starkly … Going even further by denying that he had been asked for a greater effort. “After lowering me 50 percent, nothing more was said to me. It is a lie that they asked me another 30 percent as has been said,” he proclaimed, showing the feeling that it was the club that did not want his continuity. As incredible as it may seem.

After 13 years, Barcelona begins the course without number 10. Released with defeat, on August 31, 2008, Messi directed Ronaldinho’s magic to a new and unknown dimension during 668 games in which the jacket was his. The 10 of Pelé and Maradona is also the 10 of Messi and will be so forever in world football … But without discussion and with more sense in a club that today feels more orphaned than ever.

Laporta proclaimed in his speech on Thursday that Barça has a 122-year history, but nothing and no one in the modern era of the club has had the ancestry of Messi. That

signature on a napkin, reflex action and raised anecdote over time, a gigantic chapter in the Barcelona story was the small gateway to eternity. After almost 21 years, Barça cannot be explained without him. Grandparents who still remember the feints of the Kubala that invented the thread have succumbed just as parents who grew up with Cruyff and keep Maradona’s dribbling or Ronaldo’s explosiveness in their minds, as brief as they are unforgettable. TO

He has been the youngest, the grandchildren, who have made Leo number one on the list and have drawn everyone to that consideration. Nobody was like Messi. and Nobody guesses capable of taking his place …

Legendary on the scoreboard and in football, Guardiola’s Barça will always remain in the retina, born in 2008, achieved unanimous consideration throughout the world. Reached the ecstasy of results with the sextet of 2009 and the absolute legend after two years, in 2011, that team was able to place three of their own on the podium as the best in 2010, accompanying Iniesta and Xavi to Leo in the podium of the Ballon d’Or that crowned the best Barça.

Messi knew how to make his place and adapted to all the changes, almost always abrupt, in the club. To the change of presidency in 2010 with the arrival of Rosell instead of Laporta, to Guardiola’s departure in 2012, to the illness and death of Tito Vilanova in 2014, to his disagreement with Luis Enrique a year later, and to Neymar’s flight in 2017, perhaps the moment when the club began to fall apart.

He was always there, scoring more than 30 goals per season and distributing assists everywhere to keep a club that was breaking up in the locker room and in the offices, from which Leo moved away more every day, seeing himself deceived, when not mocked, by executives with a lot of smile and little tact.

There has not been a footballer capable of surviving the wear and tear of Barcelona like Messi. Kubala ended up at Espanyol years after Samitier left for Real Madrid, an unequivocal sign of the club’s character already in its distant times. Maradona, Schuster, Laudrup or Figo left the Camp Nou in a very different way than expected in the midst of the storm and Neymar did so by treacherously hanging on a check. Leo, on the other hand, always remained firm with the 10 on his back and leading projects, whether they were exciting or decande.

All in one, in Messi the best of all his predecessors was discovered, from Kubala to Cruyff; from the impossible thread to the unattainable change of pace. For 17 years and until eternity, the figure of Leo Messi will be capital at the Camp Nou … And his farewell as unexpected as sad. And cold.