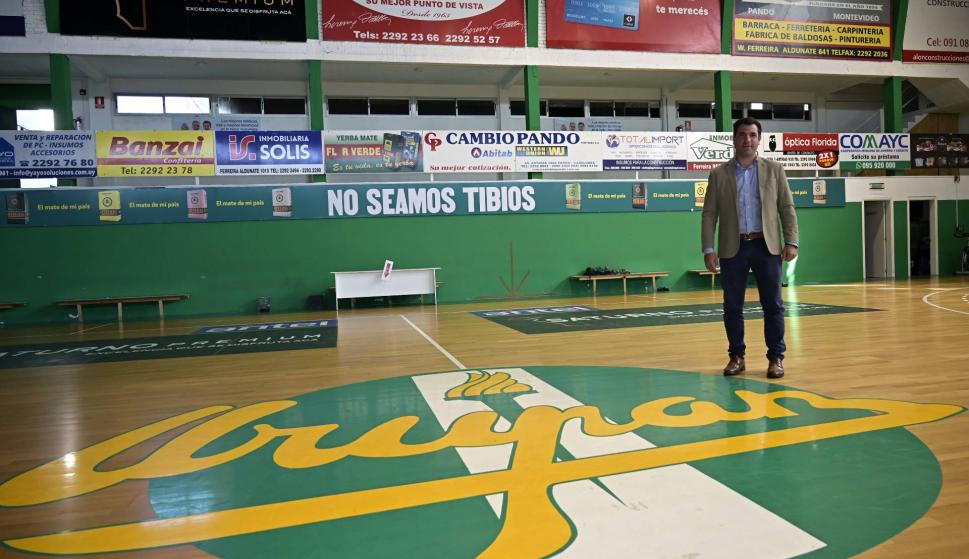 dawn on panda. The sun is just delivering its first rays of heat, those that help lift the frost from the lawn. People are still preparing to start their daily routine, but from 6 in the morning there are already lights on at the corner of Wilson Ferreira Aldunate and Ituzaingó, in the very heart of the city, in front of the main square. there in Urupánthe city begins to beat.

From very early, when at this point of the year it is still dark, 30 employees begin to work because in a little while the children from the four schools of Pando begin to arrive and do gymnastics for free in the club’s facilities every morning. Also very early the first members begin to arrive, those who start the day lifting weights, doing aerobic exercises or even hitting the sandbags of the boxing gym to arrive unloaded to fulfill their demanding activities.

Pando wakes up with the lights of Urupan, the club that in just under two years (January 30, 2024) will be 100 years old. And today the green pandense shines more than ever, because the sporting successes that have led it to be the Uruguayan basketball sensation it has generated an identity, a sense of belonging for the inhabitants of the town and the surrounding area that make it the pride of the city.

“Urupan of Pando, Urupan of all”. That is the statement, but more than anything it is the soul of the institution from 2009, when Luis Avero decided to launch the recovery of the club under that motto. “I was 20 years old, I joined the board and they prepared me for this,” he says Martin Dangiolillocurrent president of Urupan at the age of 34, who has been in office for two years and for this reason became (at 32) the youngest to command the institution.

In Urupan, basketball is the main exponent, but it is only the visible part. There is also futsal (it has been third since 2017 in the AUF tournament), women’s handball, basketball school, futsal school (led by Miguel Aguirrezabala, coach of the main team and the beach soccer team), boxing, dance, artistic gymnastics, acrobatics in fabrics, bodybuilding, spinning, aerobics, in addition to the organization of two Mountain Bike races per year and a 7k athletics race at the end of each year.

“The club has become a center of activities, because, for example, several institutions used to organize competitions for charity and in the end we ended up doing three or four of the same things with few people. One day we got together and in Urupan now many people gather to participate under the same organization”, he explains for his part. Alexander Nisivocciaformer Capitol basketball player and since 2010 general manager of the institution.

The rescue of the institution

The club is located in front of the main square of Pando. Photo: Leonardo Mainé

In 2009 a long-term bet was made. “The club was complicated by the wear and tear of the previous directives,” recalls Dangiolillo. The first thing was to regularize the accounts and the operation. “The bodybuilding part was recovered, for example, which was outsourced and thus we returned an activity that could generate money income.” By that 2009 there were about 200 members and today, 13 years later, there are 1,200. “The pandemic affected us like everyone else, but we continue to recover partners. Our number is 1,500 and although it is slow, the number continues to increase.

From that statement “Urupan de Pando, Urupan de todos” then began a symbiosis between the city and the club. The active forces were involved for support and they went on to compete at a professional level. “We broke several barriers of internal competition, because the fans of clubs in the area used to be rivals, but now Urupan represents the city in a way that had never happened before. The matches are played at a full stadium and with sold-out tickets”, points out the president.

The flag on the Cigliuti says it all. Photo: Leonardo Mainé

Getting the club in order took the longest, because the successes happened faster than expected, both in futsal and (primarily) in basketball. They began by forming the minor categories and when everything was working well, they bet on the DTA (Third Ascent). Debts with the Uruguayan Basketball Federation were canceled and competition began.

“We projected two years in the DTA and that was fulfilled. Then we went up to El Metro and there we were surprised, because halfway through the tournament we saw that we were ready to go up. We had put together a squad so as not to go down, but the push that we brought from the DTA took us to the Uruguayan League,” says Dangiolillo, who recalls that even then he began to talk with the big companies in the city to see how they could collaborate to “not be embarrassed”, he thought at the time.

The gigantography of the champion team of El Metro 2020. Photo: Leonardo Mainé

Urupan was champion of El Metro, went up and achieved a budget of 200,000 dollars for the LUB. “We understand that he is the third shortest in the league, but we found such a sense of belonging in Esteban Yaquinta, his coaching staff, the players and the fans that we managed to get into the top four.”

Urupan is preparing to face Trouville for the quarterfinals of the LUB, a rival that they won both games in the regular phase. However, it will lose a key factor for the final instances: the locality. They only lost one game in the renovated Santiago Cigliuti stadium, with a capacity for just over 1,200 spectators. And it was against Goes, who finished first. “Trouville changed foreigners 10 times and we never did, and that is because our people have that sense of belonging that we are talking about. Americans (Antonio Bivins and Donald Robinson) live here and are part of the city. People see them on the street and take photos with them,” says Nisivoccia. And Dangiolillo points out: “It happened to us with Bivins that he had a seven-millimeter tear and we thought about cutting it. We meet with him, we talk about it; we didn’t want him to leave, but the situation was that we needed a full foreigner for what was coming. He told us that he felt that he was coming, we had him checked and they told us that yes, he is going to come. And there he is, throwing.” At that time both Americans were in the gym, alone, shooting hoops. The third foreigner is the Lithuanian Zygimantas Riaukas, who continues to live in Montevideo.

The brand was promoted

The triumphs and the good administration not only managed to strengthen the pride of the Pandense community for their club, but also strengthened the brand. That is why, for example, Agustín Cáffaro arrived for El Metro last year, player of the Argentine national team, who arrived on loan from San Lorenzo. “We have the letter signed by Marcelo Tinelli,” recalls Dangiolillo. How did a player of such quality land in Pando? “It was through a representative, but he had better offers and he chose us because a friend of his told him to come to Urupan because he was sure he was going to get paid.” That was the leap in quality that the squad had in 2020 to win El Metro.

Another fact that reveals the sense of belonging and the power of the brand is that, according to Nisivoccia, more than 500 shirts were sold during the LUB dispute, something unusual. “That for us is like Nacional or Peñarol selling 50,000.”

A club for the family

Urupan is a club designed for the family and it works towards it both with an eye on the present and the future. That is why the tickets are popular: they vary between 100 and 200 pesos, when they started charging 500. “We see it as an investment in the future. We don’t even have a barra brava. They are all gurus of the training that come with their parents and we want the families to be on the pitch supporting the team”, says Dangiolillo with some pride.

This is also allowed by the administration. “The basketball budget is outside the club. There are partners or people from the city who help us, for example, putting up money to pay foreigners. Bivins and Robinson live in apartments provided by partners without charging us rent. A butcher shop provides us with the meat for them to eat, ”says the president.

The future: will there be professional football?

Pando has an area of ​​influence that covers some 200,000 people and that makes it an interesting market. For this reason it can continue to grow, although unfortunately for its interests not in infrastructure. The closed stadium, for example, cannot be enlarged any further because there is no space. However, you can continue to grow in projects.

The possibility of forming a professional soccer team is being evaluated. Dangiolillo confesses that he believes that “this is not the time”, but reveals that “a serious project came to us, from an SAD, which we are studying”.

Urupan takes short but sure steps and always moves forward. Pando accompanies him by the hand, because it is the brand and the flag of the city, but above all things because it is his pride; because it is “Urupan of Pando, Urupan of all”.

Urupan, the heart that makes the entire city of Pando beat