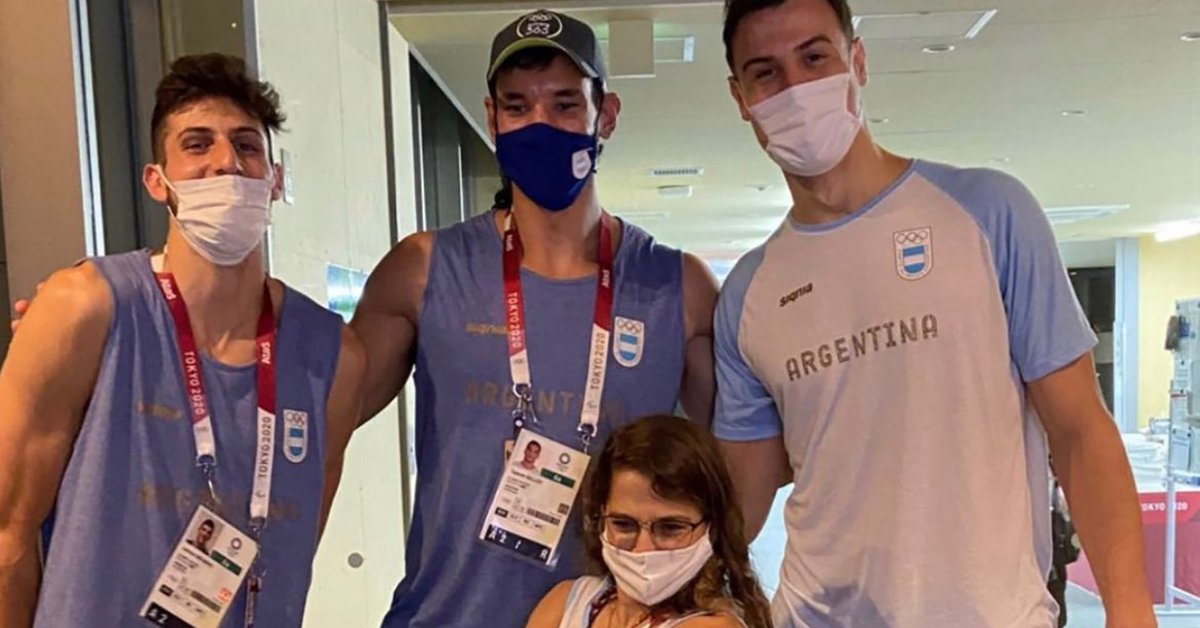 The Olympic Village is usually a place of fraternity where athletes coexist for little more than two weeks and, within the sanitary protocols in the Tokyo 2020 Olympics, it is possible for competitors to cross paths. In this case it was judoka Paula Pareto who couldn’t get a new medal, but said goodbye to the rest of the Argentine delegation and in the meeting with members of the basketball team a very special photo was given.

Pareto appears with three players, the intern Tayavek Gallizzi, the guard Leandro Bolmaro and the pivot Francisco Caffaro. The photo was published by the Instagram account of the Argentine Basketball Confederation (CAB). In the image they added “We have bodyguards, Paula Pareto”.

The judoka is very loved and respected by all athletes due to her effort and dedication to be in each competition, in particular for these Games, whose part of her preparation in 2020 was done at home because of the pandemic.

Pareto ended his stay in Tokyo with a close fight in the repechage to seek a bronze medal and thus marked his final goodbye from elite sport. The gold medalist in Rio de Janeiro 2016 fell to the Portuguese Catarina Costa and was left with an Olympic diploma, but mainly with the consideration of world sport.

Paula had already had a recognition in the inauguration ceremony where he was one of the six chosen people who carried the Olympic flag. At 35 he put an end to his sports career, just as he had anticipated. The Buenos Aires won two medals at the Games, one bronze in Beijing 2008 and another gold in Rio 2016.

While the Argentine team led by Sergio Hernandez, will open its participation in Tokyo 2020 against Slovenia, this Monday by Group C, which is also made up of Spain and Japan. His match will start at 1.40 in the morning, on a day with a lot of Argentine participation.

La Oveja Hernández speaks to her clients. The coach has faith in the face of what is coming in Tokyo 2020 (@cabboficial)

In the previous start the coach, in dialogue with CAB pressHe anticipated that “I had no doubts before and less now: we are going to play well. The team is more focused on its more tactical version. We have become more detailed with us and also with Slovenia, our first rival ”.

Argentina comes from a preparation in Las Vegas with all defeats in the friendlies they played: against Australia, Nigeria and the United States. Although as indicated by Hernández, there are good prospects.

The opening match will be played at the Saitama Super Arena. The discipline has already opened fire and in one of its first matches there was the blow of France that beat the United States, which had not suffered a defeat since the 2004 Athens Olympic Games, precisely at the hands of the Argentine team that won the gold medal in that event.

To return to the Olympic podium, the Argentine basketball team will begin to write its history in the early hours of Monday against Slovenia.

Hit in Tokyo 2020: the United States basketball team fell after 17 years due to Olympic competitions
Agenda of the Olympic Games, day 3: Pignatiello, the basketball team and the classic with Brazil in volleyball will steal the eyes