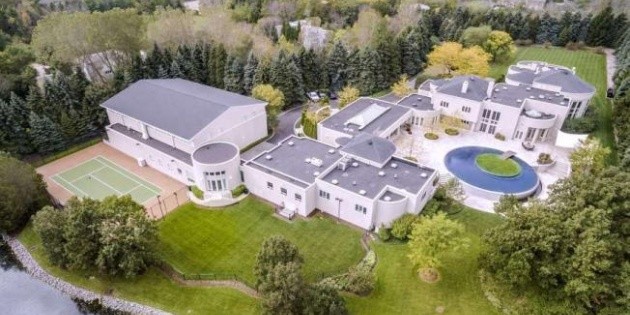 Michael Jordan is considered a basketball legend for his performance in the American team ‘The Bulls’. With his retirement from the courts, the player left Chicago and also a mansion that has not been sold for 10 years.

To this day, the mansion has gone through several price changes and there have been people interested in buying it. However, none of them have closed deals with the player, so he is still waiting for a millionaire who wants to acquire it.

The house is located in Highland Park, Illinois, and has an area of ​​3,036 square meters. It has 15 complete bathrooms and four auxiliary bathrooms. It has nine bedrooms, a swimming pool, a tennis court, a gym and a garage with capacity for 15 cars.

The most eccentric thing about this house is its basketball court, which has the actual measurements of a professional court where the player could train whenever he wanted.

In addition, Jordan also had a golf course where he used to spend free time practicing, as explained in a report by the ‘Chicago Tribune’.

Currently, the mansion is located next to a forest reserve, which makes it more private and spacious. However, this situation has also generated disinterest in customers, because it makes access more complicated.

According to the aforementioned newspaper, the mansion went up for sale in February 2012, with a price of 29 million dollars, although there was no one who wanted to acquire the property.

In early 2013, Jordan lowered the price of the house to $21 million. Later, the mansion was auctioned and the maximum value offered was 13 million dollars.

However, the clients who offered this amount did not conclude the deal, so the house continued to be for sale. At the end of 2013, the price of the mansion closed at 16 million dollars.

Finally, the final price was established in 2015, this being a value of 14.8 million dollars.

Katherin Malkin, listing agent for the company Compass, stated in an interview with the local media ‘Elite Street’ that she has been quite interested in buying the property.

She also assured that there have been several people who have asked her and who have also been interested in acquiring the mansion.

Malkin mentioned a proposal that some clients had regarding subdividing the land to make it more affordable. However, the agent stated that this was not so easy due to the extension and dimensions of the property.

Other properties of Michael Jordan

Currently, the player owns a mansion in Jupiter, Florida, next to the arena where The Hunters play, the NBA team of which he also owns, as explained by ‘Chicago Tribune’.

Additionally, Jordan also owns a 15,000-square-foot, six-bedroom mansion located in Cornelius, North Carolina. The value for which the player bought this property was 2.8 million dollars.

On the other hand, the player sold a house of 889 square meters located in Park City, Utah. Although at that time the price of the house was not revealed, it is known that it was put up for sale again for a value of 7.5 million dollars.