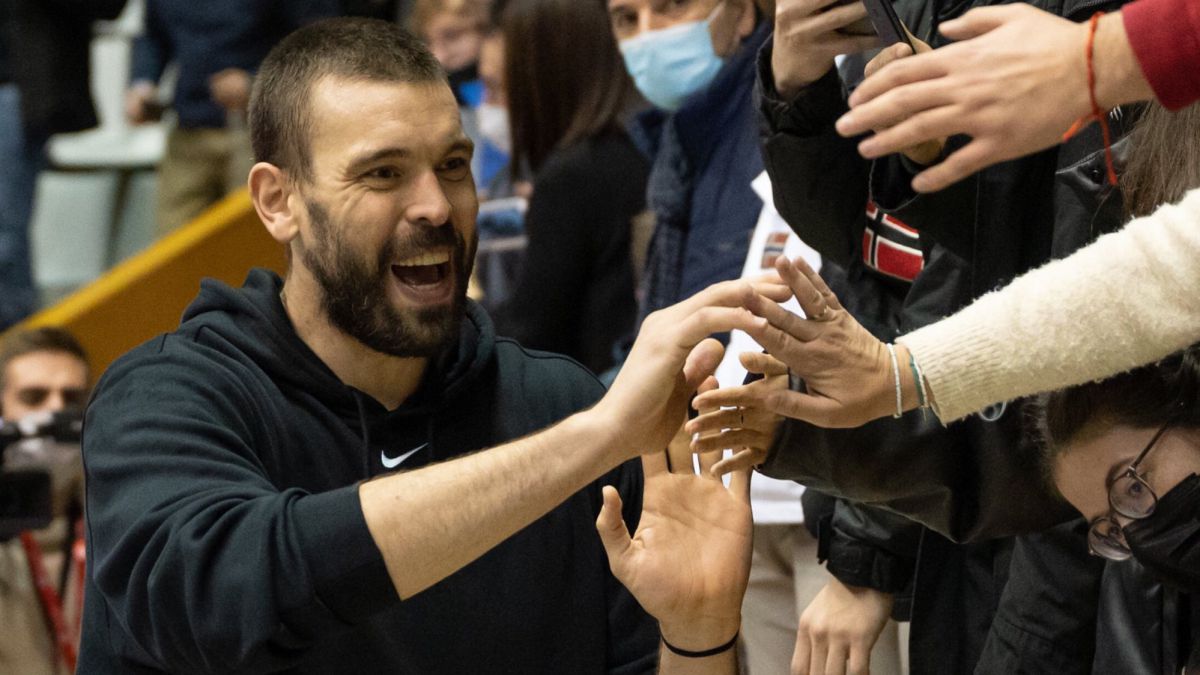 For Marc Gasol, a man with an enviable track record and track record in the world of basketball, continuing to compete was the most important thing. And, given his physical and family situation, the best place to do it was Girona. A Bàsquet Girona of which he is a player but also president, and that has changed radically since the NBA champion landed on the team. In a mature and mature decision, Marc decided to return to his origins to be happy playing basketball. And he tells it in AS.

– How is he physically? He has missed a few games this season due to physical problems…

– I still have some discomfort from a previous game. We had tried to mitigate them for two or three days after the game and before the next one, but when we increased the pace they increased to the point that they did not let me play. In Lleida I went out on the court, I was excited to play there and help my teammates, but I had to stop because the discomfort increased.

– Are you still far from your best physical and game level? When do you think you will get it?

– Yes, I’m still far away. I still have a long way to go to reach my best level. We are improving, in fact we were on a good path and actually we still are. There are obstacles along the way but the process, the global evolution, is very satisfactory.

– Is playing with Girona in LEB Oro as expected?

– Yes, quite. I psyched myself up before announcing my decision. It is true that it has been a little different during the last weeks because we had to be confined by COVID and we stopped the activity at the beginning of the year. Apart from this, however, everything is going as I expected before starting to play with Girona. We travel and compete throughout the territory, I am very excited and I also see many people wanting to watch basketball and support our project. It is being very satisfying to play in Girona, it fills me a lot.

– These first few months already fully integrated into the team, playing and participating… Do they reinforce your decision to leave the NBA and join Girona?

– It’s just that I don’t make that reflection. I don’t look back or think if I should have made another choice. It was the one she felt she had to take at the moment. If in the future I don’t see myself playing in Girona, I’ll change, I have no problems with it. In the end it is just a decision about basketball, we are not talking about things of vital importance.

– So… What is your future? Do you see yourself outside of Girona?

– I want to be fine now, put myself at my level because if I’m fine now I’ll be in the future. I work day to day, I don’t look beyond. I want to continue adding people to the project, both individuals and companies, and make people want to come to Fontajau. I think this is also an important part of my work in Girona.

– But beyond the club, on a personal level. Will you retire in Girona? Are there options to still see him with another shirt? To return to the NBA?

– everything is open. I am lucky to have the contractual freedom to do what I want with my future. But you have to think that when you are older each movement involves a greater number of people. Now I am responsible for my family and it is something that I put on the scale and obviously it also weighs. I am lucky to have already lived a long time in the world of basketball, to have experienced very special things. And I still live them. Without the media focus, but the essence of basketball, the game and the fans, are still there.

– Was it difficult to make the decision to leave the NBA? How did he manage it?

– It was not a decision about whether or not to continue in the United States. I didn’t decide to leave the NBA. What was clear to me was at what point I was at, how I was feeling, and that I needed a few physical minimums to continue playing. If I’m not good, I’m not having a good time playing basketball, and if I’m not having a good time, it’s not worth playing. I hope to have a good time playing basketball. And the ideal scenario was that of Girona because not only can I recover my physical level, but it is perfect to combine it with my family responsibilities, which also give me a lot. Apart from this, I also saw that my arrival at the club could be a very big boost for it, as it is. I am very happy with how things are going and the atmosphere that has been generated in Girona.

– Now you are part of a team of which you are not only the flagship, but you are also the president. Do you feel more responsibility than when you played at the highest level?

– Fortunately or unfortunately, I guess it’s part of my way of being, I’ve always felt very responsible for the groups I’ve been a part of. Now in Girona even more so because I am the president, as well as one of the team and group’s benchmarks. I am older, more reflective and I know the risks that some decisions entail. Now I can make the decision not to play some games thinking about a broader picture even though it is not easy because you want to play.

– Your brother returned to Barça last season, you are in Girona and recently Ricky Rubio said that he would like to play in Spain before retiring. After so many years in the United States, why do you feel like going back home?

– Precisely for that reason, because this is our house. Here you are at home, with your family. Cristina (his wife) is from Sant Boi. The children have grown up in the United States but their mentality and life have been developed in Catalonia. At least until they decide. We have the whole family here. The years go by and you have to see what each thing brings you.

– If Pau had continued for another year as a Barça player, as the club suggested, would you have considered playing for Barça instead of Girona?

– Honestly, it didn’t change anything if Pau followed or not. Whether or not he continued at Barça was his decision and he was not part of mine. It is as if I told him to come and play at Girona. Each one has to make the decision that best suits their vital moment and Pau already made it at the time.

– You have to psych yourself up, because obviously it’s not the same. You go from getting on a plane in a very comfortable trip to doing it on a bus. But the essence, which is what made me fall in love with basketball, is in the game. Being able to continue competing makes up for all the change.

– Do you suggest that the essence of basketball can be found earlier in the LEB than in the NBA?

– I don’t want to compare it. Sometimes it seems that we complain a lot about the NBA but there are things that we can and should learn from. Nobody owns the essence of basketball, what is right and what is wrong. They have very different conditions and tools and use them. Here we think differently and we have other means.

– The situation you experience in Girona does not happen very often. He is the president and the coach. How is the relationship with teammates and the coach managed?

– It’s normalized because we’ve been together for a long time. The coach (Jordi Sargatal) has been at the club for seven years. I have been working with this group since September and most of my colleagues have been together since last season. It is a completely normal relationship. They know that everything we do is for the good of the group. And on the track I am one more.

– Are you worried about the dependence that exists on your figure? The team is another if you don’t play…

– It’s obvious. Denying it or running away from this would not be fair. We have to keep working so we don’t have so much dependence on me. We have to help each other more, give our teammates security so that they are capable of facing any challenge. It is also being an atypical year, there have been many changes. Departures, new coach, my arrival… It’s not easy to manage but it’s also part of the beauty of this sport.

– What future does Bàsquet Girona have? How do you see the club in the medium-term future? What are your goals?

– Keep adding people to the project. Go sharing it with as many people as possible from the business and personal point of view. That people feel proud of the club they have. All this is done for them. That they feel proud of Bàsquet Girona. I do all this for the community. They made me feel very special when I played here and this is my way of paying them back.

– Do you aspire to see Bàsquet Girona competing among the greats of the ACB, playing at the highest level?

– Yes, we aspire to be at the highest level. But with sustainable growth and with growth that goes hand in hand with many other things. We are a brave club that does new things. We were pioneers in 3×3 in Spain and we are constantly growing. The club now has 21 teams and we have incorporated women’s teams, which was very important.

– Do you feel that you have been a key figure for basketball in Girona? That surely there are boys and girls who will practice this sport thanks to you?

– It would be a bit pretentious, but I would really like it if they can enjoy basketball with us. But it is not because of me, we do not own basketball, it is to give them the option that they can be here and be part of everything that basketball has to offer. That they come to Fontajau to enjoy themselves, that they feel that they are an essential part of the club, just like the season ticket holders, members or players.

Marc: “If Pau had continued, I wouldn’t have changed my decision”