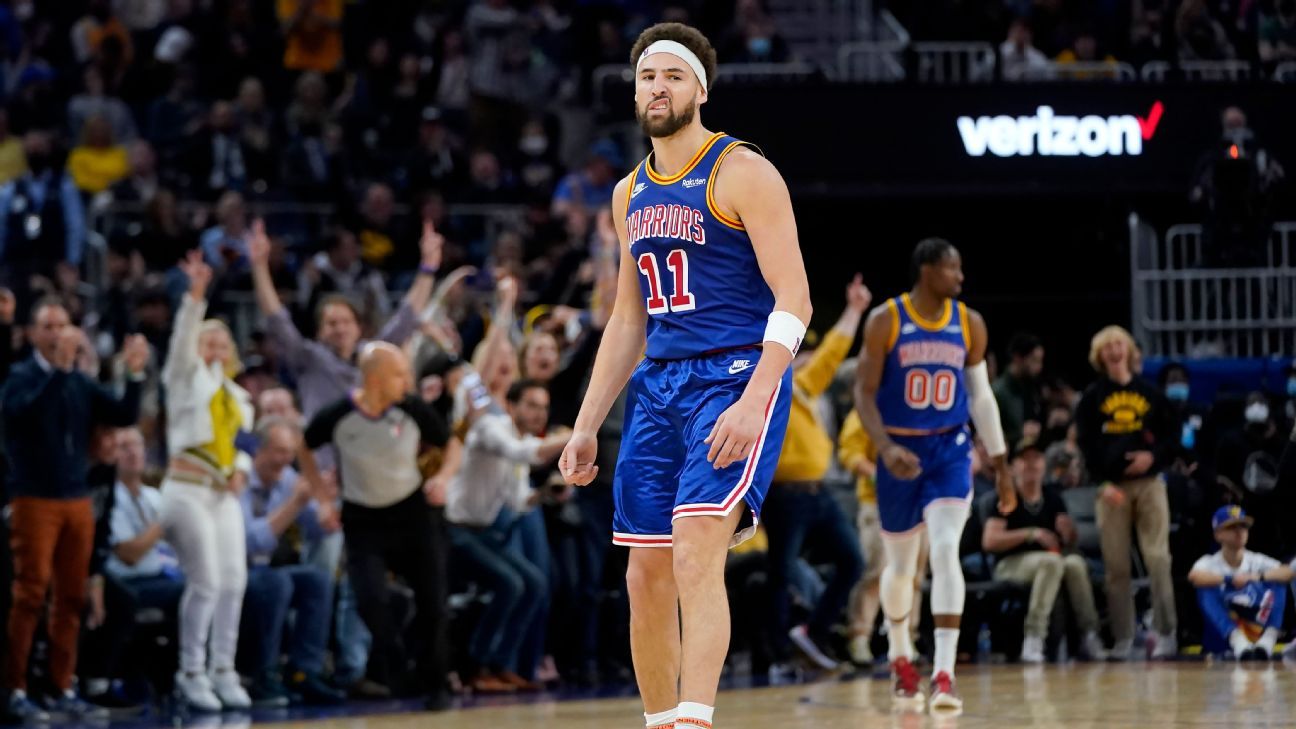 Klay Thompson, with 38 points and 8 three-pointers, gave the Golden State Warriors a solid 122-109 win against the defending champion Milwaukee Bucks, on a day in the NBA in which the Miami Heat, without Jimmy Butler, sank at home against the Minnesota Timberwolves.

The Warriors regained second place in the Western Conference, while, in the East, the Toronto Raptors achieved a great victory against the Denver Nuggets that allowed them to place themselves one win away from the Cleveland Cavaliers, who occupy the last position that gives direct access to the playoffs.

The shooting guard had a great game: 38 points, 6 rebounds and 5 assists, while Jordan Poole had 30 points and 6 rebounds in the 122-109 victory over the Bucks. In Milwaukee, Giannis was the leading scorer with 31.

An amazing performance by Klay Thompson, with 38 points and 8 three-pointers (15-for-24 shooting), led the Warriors to victory against the defending champion, the Milwaukee Bucks.

On a less than brilliant day for Steph Curry, who only scored 8 points, with 2 three-pointers, the Warriors managed to beat some Bucks for whom the 31 points, with 8 rebounds, by the Greek Giannis Antetokounmpo were not enough.

Minnesota did a great job collectively, as 8 players finished in double figures in scoring, with Jaylen Nowell being the standout with 16 points. In addition, Towns contributed 15 points and 10 rebounds. In Miami, Herro stood out with 30 points.

Without Jimmy Butler, out for health reasons, the Heat suffered their second loss in the last three games, despite Tyler Herro’s 30 points, with 6 triples.

The Timberwolves, one of the most fit teams in the NBA, with seven wins in the last eight games, conquered Miami with up to eight players over ten points, led by Karl Anthony-Towns who had 15 and grabbed 10 rebounds .

DeMar DeRozan, with 25 points, fueled the Chicago Bulls’ second consecutive win to restore confidence after the previous five-game losing streak, on a night in which Alex Caruso returned with 11 points after almost two months out due to injury.

As a visitor, Toronto beat Denver, who did not have minutes from Campazzo, by 127-115. Siakam was the winner with 33 points and Barnes added 25 plus 10 assists. Jokic, 26 points plus 10 recoveries at home.

Cameroonian Pascal Siakam, with 33 points, 7 assists and 5 rebounds, and Scottie Barnes, with 25 points, 10 assists and 8 rebounds, drove the Toronto Raptors valuable away win against Denver Nuggets, who had Nikola Jokic with 26 points, 10 rebounds and 7 assists.

The Raptors were placed seventh in the East, just one victory behind the Cavaliers, sixth, who occupy the last place that gives direct access to the playoffs.

The Argentine Facundo Campazzo was only 1 minute and 13 seconds on the court.

It was by 134 to 125 with Clarkson as the great figure of the game with 45 points. Bogdanovic finished with 26 and Mitchell with 25. In Sacramento they fell short of Fox’s 41.

Without Frenchman Rudy Gobert, Jordan Clarkson was the leader of the Utah Jazz with the best performance of his career: he scored 45 points, with 7 triples, to hold off the 41 points and 11 assists signed by De’Aaron Fox at Sacramento Kings.

The Jazz rebounded from a loss to the San Antonio Spurs to move fourth in the West, ahead of the Dallas Mavericks.

Indiana was superior to Popovich’s team. It was 119 to 108 with 19 points and 10 assists from Haliburton, 19 points also from Washington Jr. and 15 from Dominican Duarte.

A double-double by Tyrese Haliburton, with 19 points and 10 rebounds, propelled the win for the Indiana Pacers at the home of the Spurs, who fell again after scoring a milestone just a day earlier, when Gregg Popovich became the coach with the most wins in NBA history (1,336).

The Spurs, in which the best was Jock Londale, with 26 points and 7 rebounds, are twelfth in the West (26-42), while the Pacers, who ended a three-game losing streak, are thirteenth in the East (23-45).

The Blazers defeated the Wizards this Saturday in the NBA with a great performance by Josh Hart, who showed off with 44 points, being the most outstanding player of the night.

Josh Hart’s 44 points, who had never scored more in his career, along with 8 rebounds and 6 assists, propelled the Portland Trail Blazers to victory against the Washington Wizards.

This victory allows the Trail Blazers to be placed eleventh in the West, just one win from the tenth position of the New Orleans Pelicans (with one game less), which is worth the ticket for the play in.