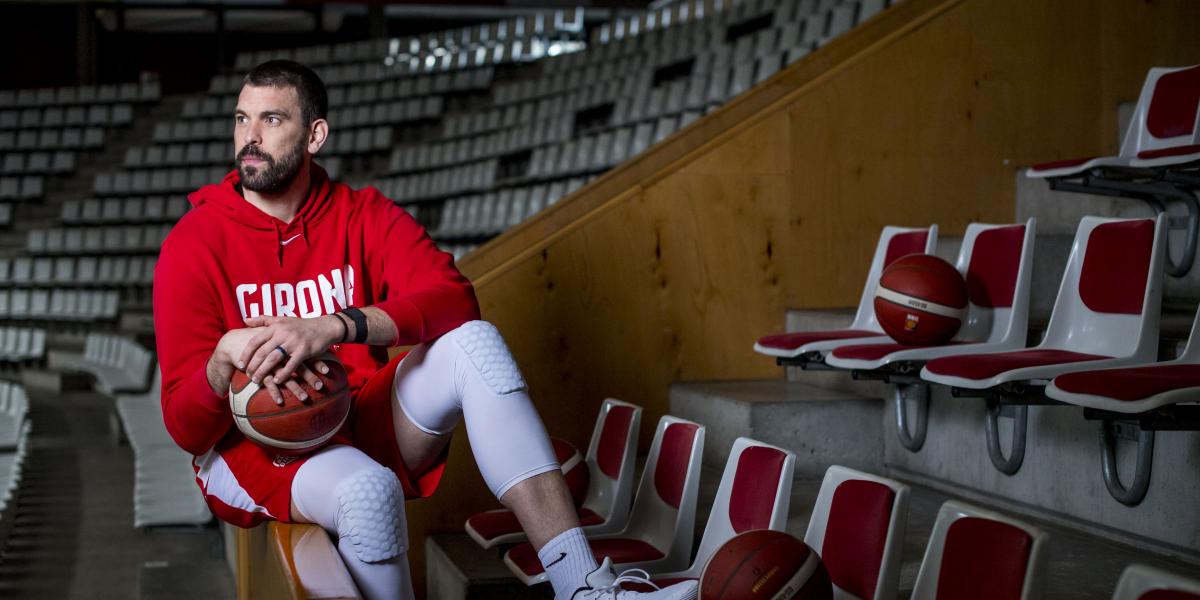 Three months after joining Bàsquet Girona as a player, which he also chairs, Marc Gasol says he feels enthusiastic about the double job, he doesn’t miss life in the NBA and faces the key moment of the season with his club.

Recovered from your recent physical problems? What personal feelings do you have with the team?

We are on a good run of results but we have to keep working because, you know, when you get lost for a second, the results start to change. Physically I am feeling better but I have already had a warning that we have many kilometers in our legs and more and more lights are coming out on the ‘control panel’. Luckily, I have a great time on the track and if you feel physically safe you can help.

What is more difficult: being a player or president?

Are the club’s growth prospects in line with what you expected?

Yes, maybe too fast everything. I would like to go little by little but situations arise and you have to take advantage of them. We are now investing a lot in 3×3 and giving it its own image, it is a modality that is very attractive, people like it and it is growing. And in five by five we want Fontajau to be a stronghold.

[+] Watch the video of the interview

The player and president of Bàsquet Girona answers MD’s questions

With the changes that have taken place in the team, can the objectives be achieved?

The objectives have changed, it is clear. The start of the team was very inconsistent and with the change of coach and my arrival the whole dimension of the team changes. It’s a shame that people you care about have had to leave the squad, and this is the hardest part. But there are also players who contribute a lot to the group and everything becomes a bit more professional. Two have arrived with a lot of experience. Txemi (Urtasun) I had to sign because I didn’t want to be the oldest player (laughs) and Maxi (Fjellerup) because he has a very big projection.

In victories I don’t know but in the same position they will be better than the Lakers, right? What suffering in Los Angeles?

I’m following him and yes. It is a pity now the physical state of Anthony Davis. But I would never bet against LeBron. He has a great capacity for adaptation, and a very big impact in attack because he conditions everything. I was very surprised at his ability and his leadership.

Before the All Star I heard him say that they still called him from the NBA. Do they still do it?

After saying a few times that I’m into this, I’m not anymore. The injury also gave me a bit of a brake when we raised the level against Estudiantes and my body gave me a warning, it told me to be careful that you have 37 ‘cleats’ and you can do this from time to time.

Do you miss something from the NBA?

My life here is so busy that I don’t think about it. I follow her and in the morning I have time to watch West Coast game finals but I follow her like any other fan.

What stage do you have the best memory of in the NBA?

I am little to look back. I focus on day to day, helping the kids here, setting ourselves challenges… I like to live in the moment, which is very exciting.

What would make you happier: having the team in ACB or building a good social and grassroots structure?

We are working on it and the social objectives are not independent of the sports ones. It is more important to continue growing as partners, with companies from here and abroad, as is happening. Although we have a great team that evolves and may have the opportunity to rise. One thing does not take away the other, we must continue promoting on both fronts and continue growing in all directions.

How are the synergies going with Uni Girona? The other day I read some complaint from Xavi Fernández, general director of Uni, as a result of the creation of the women’s 3×3 at Bàsquet Girona.

You have to be patient. I am not one to comment on the opinions of others. I understand that they have their needs and I understand their challenges, but we also have ours. We both play basketball, we do it in Fontajau, and we have to add. Things have to follow their process and the feeling is that we have always had a cordial relationship to help us. Some things fit and some don’t. I am in favor of sitting down to collaborate on those that fit.

I have heard him say that a club model that he likes is Manresa.

You should never try to copy anyone, but you should get ideas and when you see something that works, try to adapt it. I like the unity that Manresa has, the animation they have and that feeling is what any club leader wants for home games. This is a lot of work and to get to this point it is not enough to press a button. It is a constant ant job.

In many places, basketball is deficient and unsustainable. Are you worried that it’s like that here too?

You have to start treating the product as a private asset to which you have to adapt and not depend on the Generalitat, the Diputación or whatever. We have to work on a key aspect such as television rights, which is where the differences with other leagues are most marked, but in the end, to have a good product, you have to start filling the pavilions, so that people feel identified, that there are a good basketball show… We have been lucky for years to have very good players because we opted for facilities and good trainers, and it is something we have to continue doing because if you cannot value the trainers as they deserve, it is very difficult to grow.

Is the work of the Federation correct in these categories?

It is very easy to judge the work of others and I try not to give an opinion without knowing it thoroughly. We would like to improve in our league and when we travel to other cities I also try to learn from their experience, and how to get ahead of everything. Although no matter how many marketing campaigns you do, in the end winning and competing sells a lot in professional basketball.

Speaking of the future of the National Team, we have had periods of nine players in the NBA, two All Stars, champions and in the first level. Does the current situation, with almost no Spanish starters there, lead us to a less bright future?

We have always been lucky to maximize talent, and this is very difficult. It has been managed very well for a long time, and we continue to do so. Later, there will be better or worse generations but I don’t think we will stop competing for medals. I think we can be there. Knowing Sergio (Scariolo) and his ability to compete, he will go to his death. Then we already know what influences the mental strength and cohesion of the group, as we saw in the World Cup in China, which was like that. With these values ​​we overcome challenges that did not seem possible like against Serbia or Australia.

In the times we live in, it’s a shame that social awareness comes in situations as critical as those of war…

And how fragile everything is! no? From the club we want to push with initiatives with which we really want to work. Also personally for my concerns as at the time it was Open Arms. I see how lucky we are here and how fragile situations like the one in Ukraine are, where everything seemed stable and at one point it explodes. Saras (Jasikevicius) said it very well, this is not that far off.

Now with Ukraine is the Mediterranean drama still going to be forgotten?

Yes much more. The media focus is on this but there are still many conflicts in the world. I am reassured that the people from Open Arms, Sea Watch and Doctors Without Borders are on top. They are very persistent and I know that Oscar (Camps) will not be intimidated by anyone. Unfortunately they will have a lot of work.

How do you see yourself in one or two years?

Just as I don’t look back, I don’t look forward either. When I stop enjoying myself, I’ll consider it. When I saw that I couldn’t defend at my level, without the physical guarantees that I demanded of myself, I stepped aside without drama. I came to help grow this project that we created in 2014 and I am enjoying it. Also the Foundation with Pau, which has taken on a significant magnitude after the two intense and hard years we have lived with Covid with the psychological impact that we are already seeing.

This Sunday, key match against Cáceres

With five consecutive victories, Bàsquet Girona is currently the team in the best form in the LEB Oro, already knocking on the doors of the playoff zone after an irregular start in which they only added two wins in nine games. They are currently in tenth position with a balance of 10-10 and this Sunday (12:15) they host Cáceres in Fontajau, who are seventh with 12-9. It is a key game that can open the window to recover positions and settle in that area to be in the post-season.
“We are going to see how they play us and what they do to us”, Marc explained yesterday about the calendar in sight. “We have to win games because we are improving. The others are also reinforced but I am confident in our improvement. Now we have good home games coming up and this motivates us. That a Granada, a Cáceres, a Estudiantes or a Gipuzkoa come must give the measure… and Fontajau must be a fort”, he sentenced.
The novelty in the team this week is the Navarrese shooting guard Txemi Urtasun, recently arrived from BAXI Manresa, to complete the renewal of a squad that seems to have already found the formula to have their sights set on promotion to ACB.

‘I am more president than player’