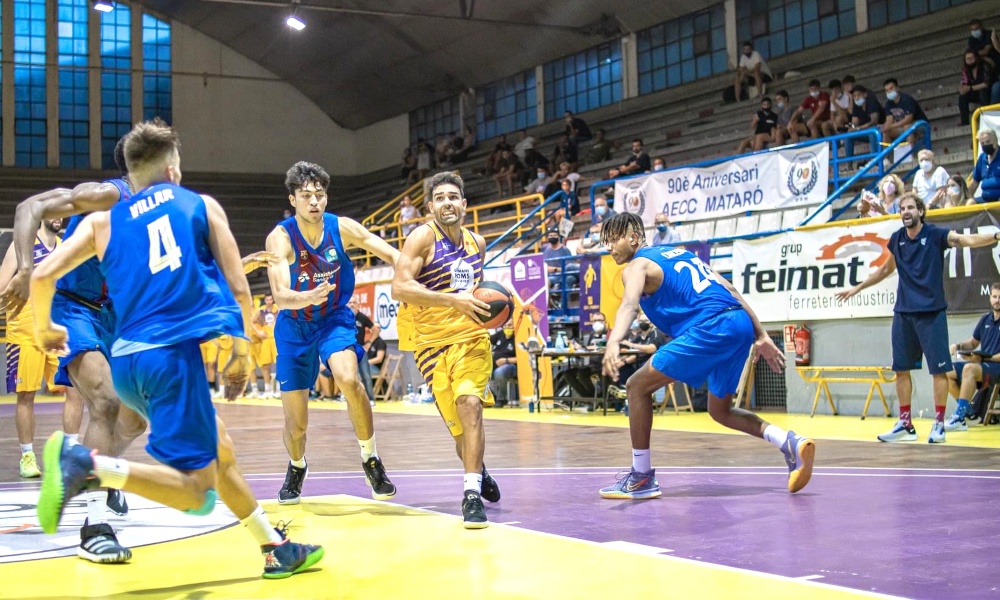 After a Regular League with three groups of twelve teams each, Group C already knows the four heats what, single party, will define the representatives for the Final Phases of Ascent to LEB Plata. In the following lines, we present the four confrontations, as well as the eight contenders looking for the final prize of the season.

A duel that we have already seen this course, as both teams shared a group (C3), where the Blaugrana subsidiary shone to be the best first (undefeated until the last day). The Mataró team will seek to put on the perfect match and surprise.

After many years in LEB, from Can Barça the quarry policy was changed and, like other ACB teams, they went on to play in EBA, with Roger Grimau at the helm. It will be necessary to see if all their stars play or the first team needs someone, but what is clear is that Agustín Ubal who left on loan to Breogán (ACB) will no longer be there. Michael Caicedo (14.9 pt, 6.3 d) is the proper name; one of the best products of national basketball, an all-terrain forward who does everything and at a much higher level than EBA. There are more decisive players, like the Mexican international Gaël Bonilla (11.7 pt, 5.1 re), who always adds in silence, or Junior stars like the total point guard Rafa Villar and James Naji (9.7 pt, 6.9 d), who has been very popular with his physique in the paint in first-team appearances. There are other youngsters from 2003 such as Ordóñez (‘four’ with a good hand) or Rodríguez (tall base) who join more of the junior squad such as Ganal, Iglesias or Simic (214 cm).

For its part, UE Mataró already tasted the honey of playing the Final Phase last season and wants to repeat. Charly Giralt maintains the squad from last season, joining in this two good pieces such as Óscar Heras and Gerbert Martí, who have been important: the first, in the direction of the game (with a fine-tuned Traver at his side), and the second , in the paint (together with Pol Cánovas in the ascending line). However, the proper names of the team are Jordi Juanola (18.6 pt, 7.2 re), with a spectacular level throughout the course (1×1, triples…), and Jaume Solé (11.2 pt), the lieutenant, riddled from the triple .

One of the most even duels between two teams that at the beginning of the season were clear favorites for promotion after being relegated from LEB Plata. Now, one is going to stay out of the fight. The Hospi, with a good season, may be a priori more favourites, but Tarragona is a team that can give a scare and beat anyone if they put aside their irregularity.

A high-flying team for this competition is what Xavi Carvajal has, in his first season as full-time head coach from Hospital. For the club it is important to have kept strong players in the squad such as Edgar san Epifanio (10.5 pt) and Albert Homs (10.7 pt, 6.6 d), who already stood out in Silver and who have been no less in EBA. It also accompanies an Albert Real (9.8 pt, 3.1 ace) in full maturity of last season’s project. Something important is also having set up a squad with defined roles, where everyone knows their role, combining youth, experience and values ​​from the academy in a team that defends and attacks equally. Placide Nakidjim (10.5 pt, 7.5 re) is the brute force in the paint and Marcus Latham (17.3 pt), a rookie American, is the player with true scoring explosions. They are joined by the experience and doll of the ‘four’ Iván García and young talents who have had outstanding games such as point guard Adrià Rodríguez or shooting guard Tarrida.

A triple tie for the lead left Tarragona in third place, after adding three of their five defeats against the other two tied teams on balance. A defeat on his visit to Roser ended up leaving them with that 17-5. A team with experience and very tough in defense, as its coach, Berni Álvarez, likes, bringing together a youth team with weighty players. The additions in the middle of the season of two former players like Ferran Torres (11.4 pt, 5.3 re) and David Fernández came to give more weight to a team that has a clear trident: the combo guard Tugores (10.4 pt, 3.0 ace), an interesting outside player like Hoexum (11.0 pt) and the star of the team, and a player capable of making a difference like the American Outerbridge (14.3 pt, 5.4 re). They are joined by many eager young people like Buscail, Mendes and Estebanell, among others.

Nice cross between a BBA Castelldefels established in the upper area, very strong at home and that will have court factor against a Prosperplast Alfindén with nothing to lose and a block that is looking for its moment after several years together.

Sustained growth of Raúl Martínez’s Castelldefels, who after many years in the EBA, already had a good course last season, when Sant Antoni separated him from the FF, and in this season he has endorsed the good feelings, repeating his classification for the eliminatory rounds and confirming what Xavi Boix told us first-hand last year. And watch out, because he has finished the regular league in a very positive dynamic, with seven consecutive wins and great strength on his court. The experience of his inside game, with the Mañes brothers (15.6 pt and 6.1 re for Marc; 12.5 pt, 6.3 re for Eric) and Bernadí, offers consistency and starts in the game. Another important addition was Serrataco’s physique (11.1 pt, 5.5 re), who has had a lot of prominence abroad along with an interesting Rafa Puerta (7.8 pt) and a fully mature player like point guard Arnau Carreras (10.1 pt, 2.3 as), who after several years in the team is at a high level. They are joined by the strength and speed of Mulió and the experience with success from the triple of a player like Oliva.

The rival of the castelldefelenc team will be the only non-Catalan team that plays these crosses; We are talking about the Alfindén directed by the young Álex Ruiz. A team that was able to overcome its bad start (three defeats in the first four games), later achieving 10 key wins to qualify for the privileged positions. One of the keys is the continuity of some players who know each other perfectly, with a wide rotation that allows intensity to be maintained. But as in all teams, there are key players. One of them is Chechu Malo (16.2 pt, 7.1 re), who is being powerful in the paint, unstoppable when he wins the position (taking many fouls) and a bastion on the rebound. Another is a Mamadou diagne (10.7 pt, 8.6 re) who was the only addition and who brings physique and springs, being dangerous in transition.

Added to them is the American Charles Knowles (14.1 pt, 5.3 re), who has not needed to be such a protagonist this year, but who is a all around that grows on big dates like these crosses. We must not lose sight of the young Álex Vicente (10.8 pt), a fast point guard who can change a game with his skills.

We will have to see how the local team handles the pressure, which last season was left at the gates and despite this it was one of the two venues for the Promotion Phases. A team that has gone from less to more and that will have a tough rival in front of it, such as the Bàsquet Girona subsidiary, which has been a revelation and has reached these qualifiers on its own merits.

A bad start with four defeats in seven games seemed to indicate that it was not the year for Jesús Muñiz’s men, but from that eighth matchday the cast of the Costa Daurada began to win non-stop and only on the penultimate matchday was Tarragona able to put them hand, which confirmed them as a very fit team. A lot of interior power with the kilos and muscle of Ngomo (10.8 pt, 7.1 re) and Barksdale (13.5 pt) that make a difference. Artur Alaminos (12 pt, 6 re), back after passing through France, acts as a key player and is deadly from the triple. Another key factor is the good direction of the game in the figure of Gonzalo Baltà (12.3 pt, 3 aces), who in his third season in Salou is at an enormous level, well accompanied by other players such as Aragonès, Sisco Moreno, a veteran Baiget and Ewulu, who confirm a team of guarantees.

In its EBA debut, the Bàsquet Girona subsidiary has surprised with its high performance, being the team led by Marc Serra one of the ones that receives the fewest points in the entire competition. A team without many centimeters but with high rotation, which allows them to play a small ball with a lot of intensity. The proper name by numbers is Toni Espinosa (14.7 pt, 5.1 re), but we must not forget the magic that he transmits from the ‘one’ Moncanut (8.3 pt, 3.9 ace) or the physique and centimeters of Lamin Dibba (6.9 re) . But be careful, because in this team anyone can shine and names like Kevin Torres (7.8 pt), Edu García or Ferran Díaz must be on our minds.