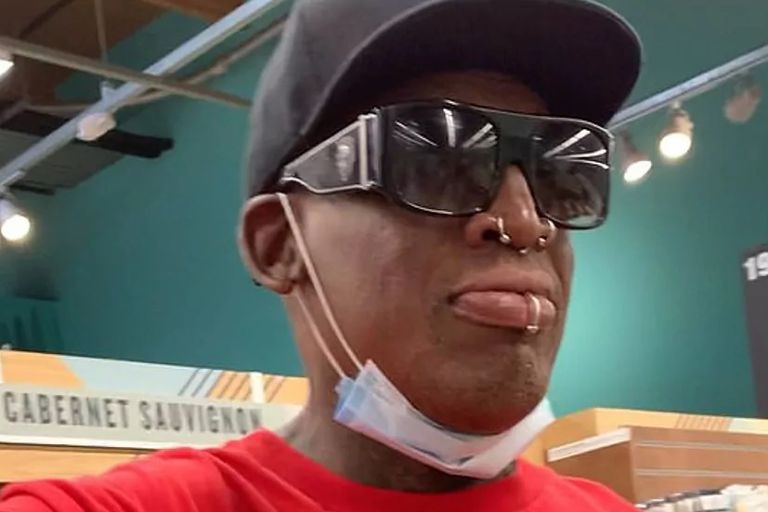 No matter the time, he is always at the center of the scene. Not only because of what he was as an athlete, one of the most important in the history of the NBA, but his noise is more linked to what happens outside the court. Dennis Rodman, now far from a basketball, is a character that generates controversy. On this occasion, he had to be escorted by the police for refusing to put on his chinstrap during a flight between Los Angeles and Miami.

His explosive character, his fights on the court and, above all, his extravagant way of life outside of them made him one of the most exciting attractions in the history of the sport. Outside the activity, he continues to show that, despite having been away from the courts for more than 20 years, he cannot stop giving the mark.

El Gusano starred in a new scandal after being escorted by the police to the flight that took him from Los Angeles to Fort Lauderdale, Florida. The former Chicago Bulls player and teammate of Michael Jordan refused to put on his chinstrap for the duration of the flight, despite the insistence of crew members.

Rodman, who was traveling first class, was called upon four times to pull his chinstrap up over his nose, as required by airline regulations. However, the former Bad Boys player of the Pistons, Bulls, Spurs, Mavericks and Lakers did not pay attention to each of the indications and kept his chinstrap by the chin.

Rodman, 60, argued that he was having trouble breathing and that is why he did not pull up his chinstrap, forcing the crew to notify Fort Lauderdale police to take him to testify upon arrival in Florida.

He was always involved in different scandals. In the documentary The last dance, where many experiences of the dynasty of the Chicago Bulls that Jordan led are relived, the licenses that were granted to Rodman count to avoid that his discipline problems were even more important. The famous vacation to Las Vegas, in the middle of the season, stole the spotlight on the show.

Rodman’s life was always a true roller coaster. If he even dared to tell that they ended up drunk with North Korean leader Kim Jong-un after a party. The two met at an event that actually had Michael Jordan as a guest and that had been organized by the politician. On the occasion of Her Majesty’s absence, Rodman took his place. About that meeting, he recalled that the dinner they shared included a drunk with vodka, karaoke and the presence of 18 “beauties.” He also said that, unlike Hong Kong and China, North Korea did not see people starving, although he clarified that he does not get into politics. “I went to take the sport.”

Dennis Rodman and a new scandal: he was escorted by Fort Lauderdale police