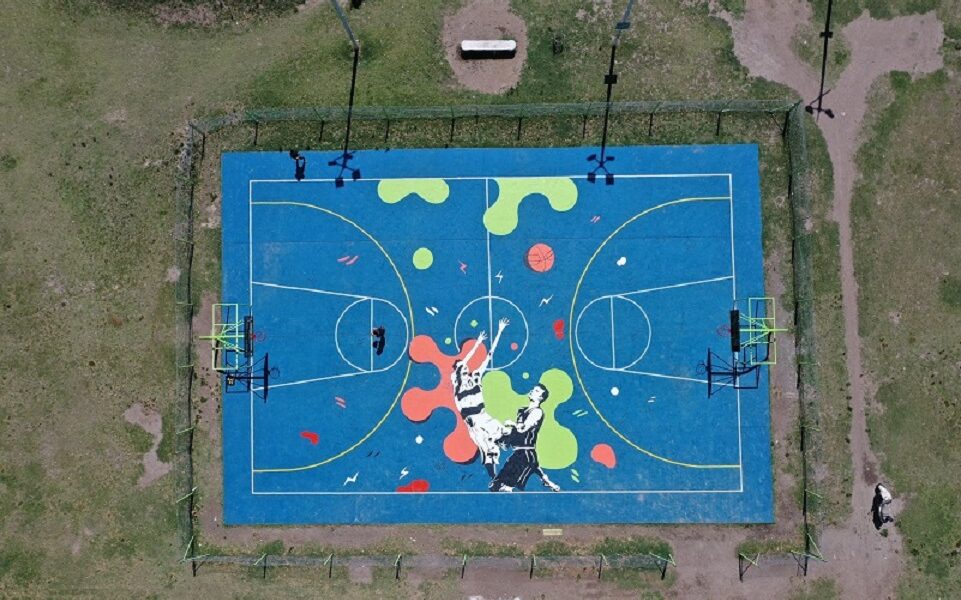 From the Undersecretary of Sports of the Municipality of Bahía Blanca they launch the call for the Lightning Night Basketball Tournament 3X3 in the brand new field of Parque de Mayo. 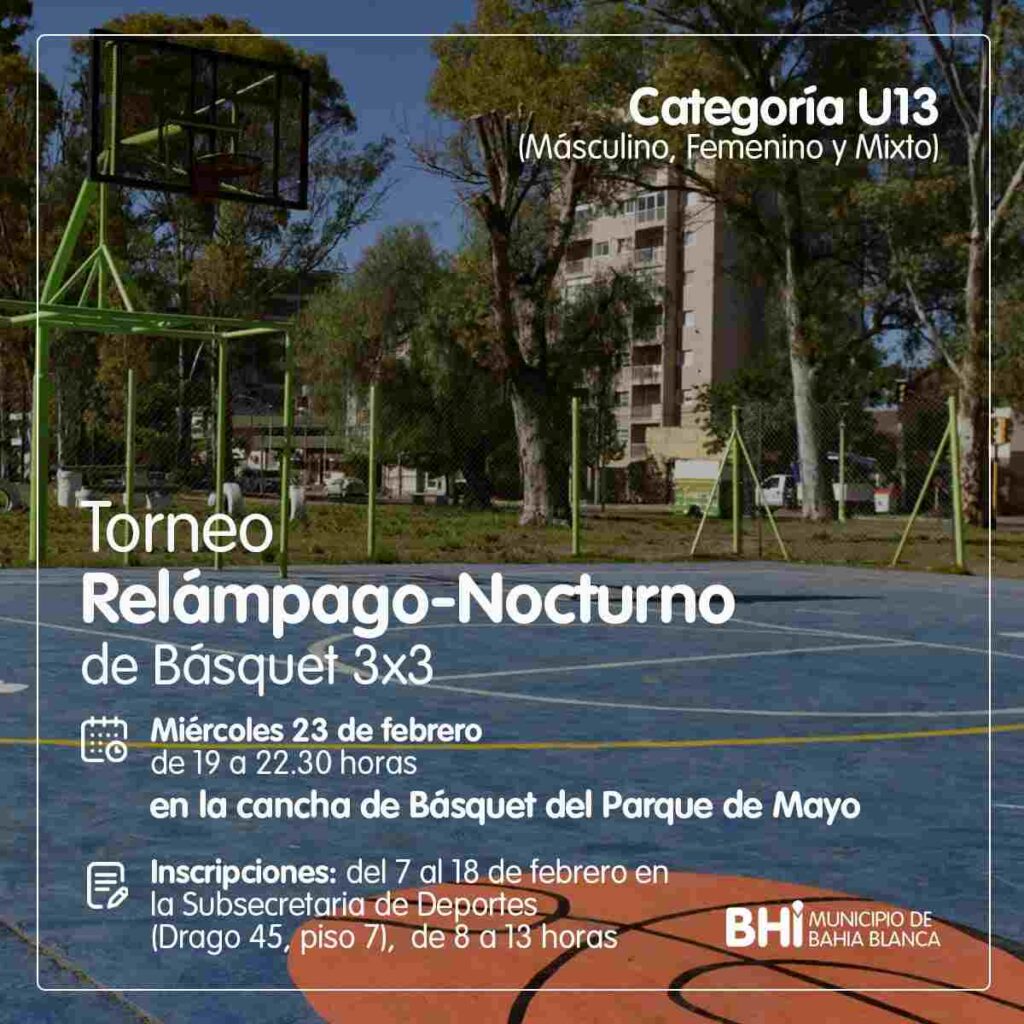 At the end of November 2021, the Municipality of Bahía Blanca announced the restoration and enhancement of the outdoor field located in the Parque de Mayo in our city.

Now, it’s time to take it into action and for this reason, it summons boys and girls from the U13 category to sign up for the 3X3 Basketball tournament to be held on Wednesday, February 23.

With the intention of exercising outdoors in one of the most beautiful places in the city and practicing its mother sport, the Undersecretary of Sports invites you to register at Drago 45, seventh floor, Monday through Friday from 8:30 a.m. to 1:00 p.m. hours

🏀⛹️#TournamentLightning3X3
The sports secretary of the @MunicipioBahia organize a 3X3 U13 tournament for everyone.

✍️To sign up for it 👇
Undersecretary of Sports (Drago 45, 7th floor)

The event is completely inclusive, so women’s, men’s and mixed teams can compete, as long as they respect the maximum age of U13.

On February 23, the 3X3 Lightning Basketball Tournament will begin at 7:00 p.m., also taking advantage of the fact that the court has artificial light and achieving the greatest amount of assistance possible to accompany the young people who sign up for the tournament.

For more information, call 4594000 ext. 2382. Registered teams must be under the responsibility of an adult and must submit a list with (data of the players name, surname and DNI).

THE COURT AND THE MANU POPCORN 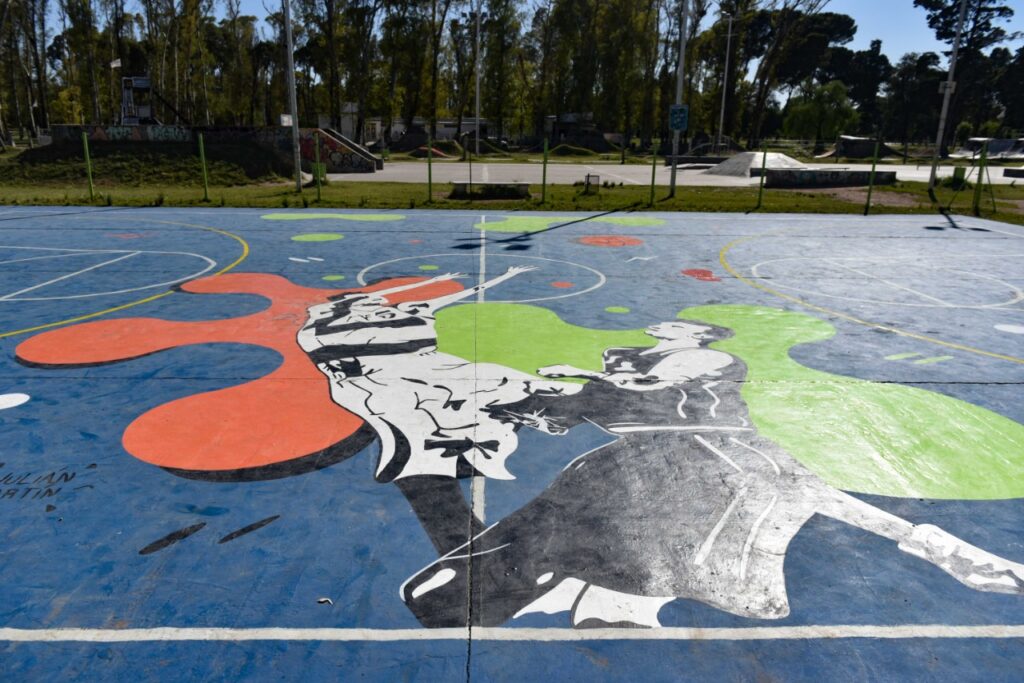 It could not be other than Manu Ginóbili and the most iconic play of Argentine basketball of all time. This was immortalized in the Parque de Mayo for the enjoyment of Bahia residents who want to show off vice in the open air on the excellent 3×3 basketball court that the Municipality of Bahía Blanca valued.

The field located in the city’s Parque de Mayo, is used by many boys and girls who go to enjoy a good time outdoors and play street-style kicks, in a sector of the city that is one of the most frequented by and the young.

The artists Julián Avellaneda and Albano Sánchez had the task of immortalizing Manu Ginóbili on the restored floor of the court, which has a blue background, with the portrait of the final shot against Serbia and Montenegro in the Olympic Games won by the National Team. Basketball Argentina in 2004.

In addition to the floor of the court, the perimeter wire was restored, the acrylics of the hoops were changed, the poles of the place were painted and the hoops were reconditioned.

From the ABB we celebrate this type of investment in public spaces that link the mother sport of the city with the people of Bahia. Basketball in the Capital is lived not only in the clubs, but also in the streets and outdoors.

The brand new court will be the one that will host the 3X3 basketball blitz tournament starting next February 23 and we invite everyone to participate in the event organized by the Undersecretary of Sports of the Municipality of Bahía Blanca.