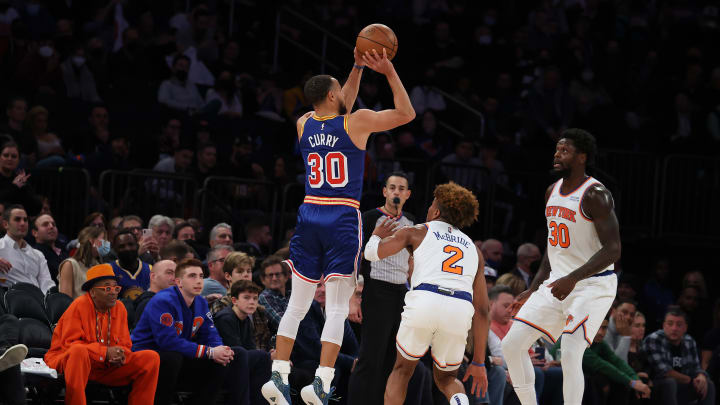 The NBA He has a new 3-point king in Stephen Curry, after topping former Celtics and Heat player Ray Allen on the all-time list in his game against the New York Knicks on Tuesday. From now on, the stellar base of the Golden state warriors he’ll increase the mark with every shot he made in his career, which makes that record hard to hit.

Now that Curry is on top of shots beyond the arc, we’re going to show the 5 memorable 3-pointers in the career of Curry in the league.

With a fully packed Madison Square Garden, Stephen Curry made history in the Big Apple by scoring his 2,974 triple in the first quarter of the game against the New York Knicks at 7:40 minutes that not only put the Golden State Warriors ahead, but he also did it in the presence of his father Dell and former league snipers Ray Allen and Reggie Miller. The basket caused a time requested by his coach, Steve Kerr, for the point guard to be applauded.

Before becoming the NBA’s top 3-scorer, Curry had already scored another incredible 3-point record with 13 goals in one game. The mark was achieved against the New Orleans Pelicans during the 2016-17 campaign calendar, in a game in which he scored from different points of the court to guide his team’s offense on that magical night, which added an important moment to his strong legacy in the basketball league.

With a record of 3s that will be very difficult to break with every performance that Stephen Curry has with the Golden State Warriors, the point guard has been able to continue to revolutionize the game with shots from the middle of the court. In fact, many NBA storytellers and commentators claim that the point guard is the pioneer of logo shots.

With the quality and accuracy of the NBA’s top 3-point scorer, it stands to reason that he is the first choice for his team when they can’t make a touchdown in 24 seconds of possession. Steph, who has a 43.1% percentage in his career in the league, has given the victory or even the score for his team with kilometer shots, beating the clock to complete an offense and unleashing the madness of his most loyal fans.

Used to throwing from anywhere on the court as a college basketball player, Curry came to the NBA in the 2009-10 season with the intention of making a name for himself with that particular characteristic. His first basket from the third dimension came on October 30 in the opening minutes of a game against the Phoenix Suns. Curry emerged unmarked from a curtain and placed himself in the center of the court of the rival rim to sink the first of many shots in his career.