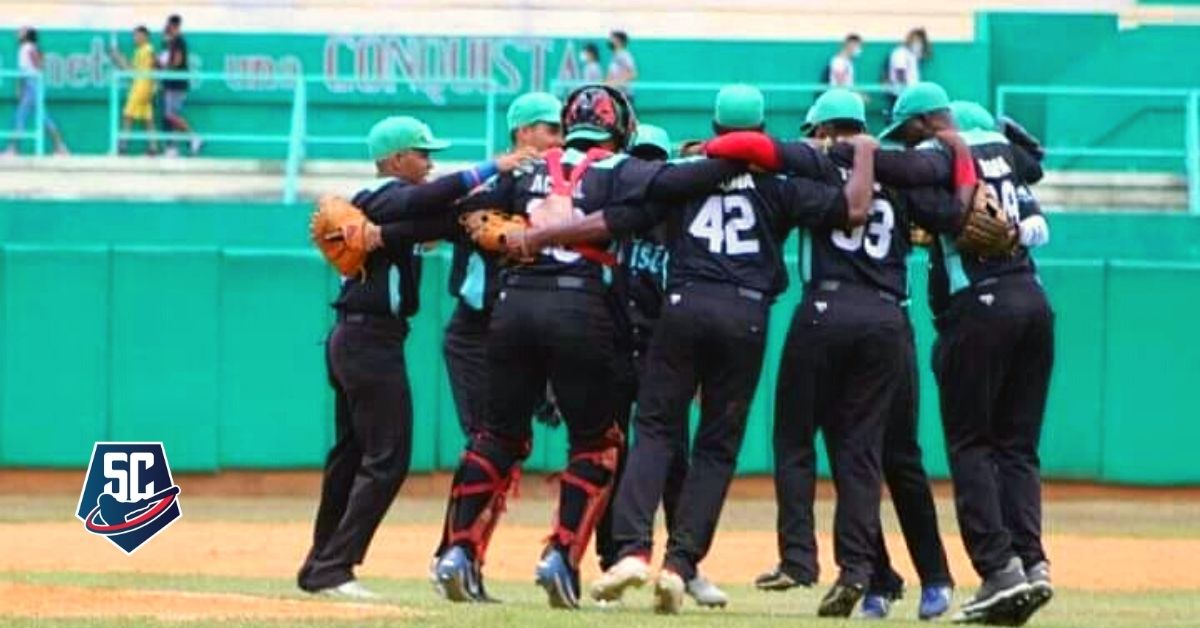 At the start of the particular series on Tuesday, Wednesday and Thursday, six games were played in the afternoon, while for the first time this season two night games will be played on the same day; when Wasps and Roosters face each other in the José Antonio Huelga and Crocodiles and Lions in the Latinoamericano.

Among the most striking aspects of the day was the fourth consecutive victory of the Leñadores with grout by star Carlos Juan Viera, the success of the Alazanes against the Toros after falling twice over the weekend, the fifth victory of the season for Yander Guevara, the phenomenal start of Wilbert Pérez, the almost zero home run production, the poor defense in general, the third triple play of the series and the victory of the Villa Clara Leopards against the Vegueros, in one of the historical classics of Cuban baseball.

Despite the fact that they lost their star player, Rafael Viñales, due to an injury whose seriousness is still unknown, Pablo Civil’s disciples prevailed with a 6×0 scoreboard against the Holguín Cubs, who continue to sink into the basement of the table with a balance of (6-15), while the people from Las Tunas, with their fourth success in a row, reached 10 successes in 21 outings, to equal Pinar del Río and the Island in ninth place in the classification, just half a game from Villa Clara, which adds 10 smiles and the same number of setbacks.

Despite not being the hardest hitting day for the Leñadores, they did manage to make the necessary runs, with the leading role of their main gunners: Yosvani Alarcón, 5-2, with a double and two RBIs, Danel Castro, 1-1, with a couple of runs scored, three walks and one brought to the plate, Yordanis Alarcón, 4-1 with an RBI and Andrés de la Cruz, 3-2 with an RBI and another scored.

Viera was impassable, in nine innings he allowed just six hits, struck out seven rivals and gave away a couple of walks, to take his second victory with three losses in the series. Holguin starter José Antonio Sánchez (1-2) was defeated, while Ihuner Anache, 4-3, was the best offensive player for the Ciudad de los Parques team.

With a hit by Osvaldo Abreu, the Alazanes scored the sixth run of the game and left some Toros without options, who had erased a 5×1 deficit, helped by the poor defense of Granma. The duet formed by César García, for six innings and Kelvis Rodríguez taking the last nine outs, were the architects of the victory from the box.

It may interest you: OFFICIAL: Cuban baseball star secured millionaire contract in KBO

César achieved a quality start, allowing three clean ones in six innings pitched; The right-hander from Granma showed good control and barely gave away a walk, they connected eight hits and struck out three. Kelvis Rodríguez (2-1) was in better shape, although he suffered from the defending champions’ bad defense that cost him a career. The reliever allowed four hits, one earned, struck out two and did not walk.

Frank Madam was not in his usual form and endured five runs, although three of them were unearned, thanks to four errors from Camagüey. Lisander Hernández (0-3) was the loser, although he only allowed one run, which was also unearned, in three innings of work, in what was an excellent relief.

Leonel Moas Jr, Alexander Ayala and Leslie Anderson, 4-2, were the best batters from Camagüey, while Osvaldo Abreu, 5-3, Iván Prieto, 4-2 with a couple of RBIs and the same number of runs scored, Guillermo Avilés , 4-2 and Alexquemer Sánchez, 5-2 and one RBI, took the lead for the winners.

For Granma it was their eleventh victory in 21 starts and they climbed to seventh place, while their rivals, with a balance of (9-12), occupy 13th place, despite the fact that they maintain a winning pace in the last ten starts of ( 6-4).

With long relief from Randy Cueto, the Leopards defeated the Vegueros

When the rebellion from Pinar del Rio in the fifth inning seemed to erase the smiles from the visiting faces, Randy Cueto appeared and for three and two-thirds innings he stopped the locals’ offense in its tracks, which only had two hits while he retired down the way of the strikes to six rivals without giving away tickets; In this way, he scored his second save of the campaign and kept the final slate of 5 × 4.

It may interest you: The reigning Champion STARTED slowly, worries Granma result

The winner was starter Javier Mirabal (2-1), who worked four excellent innings, but it was in the fifth and sixth innings before leaving the mound. With this victory, the Leopards climbed to eighth place in the table with a balance of (10-10).

Yaifredo Domínguez (1-3), charged with the setback after allowing four runs, three of them clean and six hits in four innings; he struck out one and gave away two walks. Tony Guerra, 4-3, was the best hitter from Pinar del Río and the home run hitter of the afternoon. For the winners: Yurién Vizcaino, 3-2, one RBI and two runs scored, Leandro Turiño, 4-2, double and RBI, Julio Enrique Miranda, 4-2, double, scored and RBI and Yeniet Pérez, 3 -1, with double and one for the plate; They played an offensive role.

As in his best times Wilbert Pérez silenced the Hurricanes

With a phenomenal work of seven innings at a pace with four hits, one dirty, four strikeouts and two walks, the left-hander with more than four decades of life, Wilbert Pérez, recalled his best times and took his third success of the season without defeats , so the Pirates could get to 10 wins in 21 starts this season. The final board was 5×2.

During the clash, at the bottom of the seventh, the Mayabequenses made the third play of triple play of the series, when after a single by Luis Felipe Rivera and an error by third baseman Rafael Fonseca; Dainier Gálvez fired a line drive to shortstop Rangel Ramos, who quickly forced Rivera himself at second who was too far ahead and threw to first to catch, equally moved, Aquimo Jiménez.

It may interest you: SPEAKING NUMBERS: The most productive in the 61 Series

The Pirates fell early on starter José Ignacio Bermúdez (2-2), who took the loss after enduring five hits and allowing two runs in just one inning of work. Luis Felipe Rivera, 4-3, with two RBIs, and Dainier Gálvez, also with two RBIs, were the best hitters for the winning part, while Rangel Ramos, 2-1, also stood out on offense.

For Mayabeque it was their seventh loss in 20 starts, and they are in third place in the table; since they could improve at night if the Wasps fall to the Roosters, since they are only separated by half a game.

The Indios del Guaso could do little or nothing against the devilish shipments of Yander Guevara, who continues to accumulate victories this season and reached five, with one defeat, to consolidate the Tigres in the top positions of the table with a balance of (12 -9). The final score was 4×0 and it is necessary to highlight the great replacement of Andiovis Baró from Guantanamo, who stopped the Avilanian offense and during 3.1 innings only three men reached base, two of them by walks and one by a single, without allowing runs.

Yander once again looked immense, in 7.2 innings he was hit with seven hits, struck out the same number of rivals and gave away two walks. Osvaldo Cárdenas got the last four outs and completed the second shutout of the afternoon.

It may interest you: OFFICIAL: National Commission ANNOUNCED MEASURES against the OVERUSE of pitchers

Enyer Fernández (2-4), the Guantanamo starter, was the loser, while Alfredo Fadraga, 4-3 with a couple of RBIs and Abdel Civil, 2-2 with a trailer, were the offensive protagonists of the Tigres. Now Guantánamo, with (7-14), share 14th place in the table with the Elephants, just one game behind the Cubs.

In the last match of the evening session, the Cazadores de Artemisa defeated the Elefantes de Cienfuegos 9×4 with which they reached nine successes and eleven losses, to approach half a game of the peloton of three teams that occupy positions from nine to eleven in the standings.

The victory went to starter Yunieski García (4-0), who continues to show great results this season; on this occasion he worked during the first two thirds of the game, although he presented some problems of lack of control, giving away four walks, the fundamental reason that they made three clean ones, since he only endured four hits and struck out six.

Yasmani Insua (1-4) was quickly removed from the box in the same first inning, after one out and allowing one hit, giving away a walk and hitting two balls. Despite his brief performance, he took the loss. Osbel Pacheco and José Antonio Jiménez, with three RBIs each, were the offensive protagonists of the clash. Luis Vicente Mateo, 4-2 and an RBI, was the best hitter for the southerners.

Pitcher of more than 40 years GAVE A RECITAL for the Island. TRIUMPHS of Ciego, Las Tunas, Granma and Villa Clara. Summary Series 61