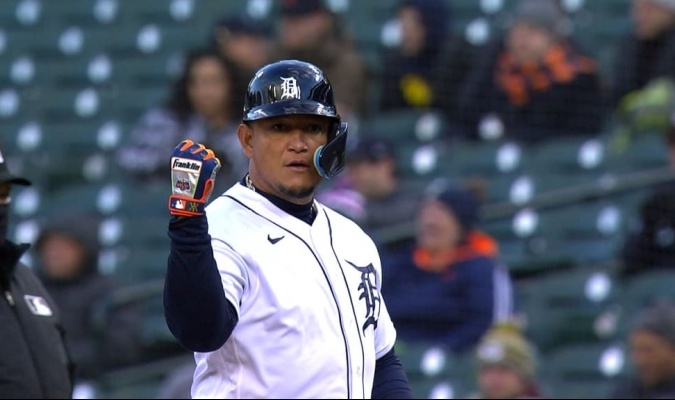 In the match between the New York Yankees and the Detroit Tigers, Miguel Cabrera takes another firm step in his quest for the legendary figure of 3,000 hits. In his first turn of the game, inning 2, he connects an infield hit against Luis Severino’s streamers.

The one from Maracay with his unstoppable moves Jeimer Candelario, who doubles, to third base, then Víctor Reyes with a single drives in 1.

For the closing of the fourth section, he again responds to Severino, connecting a single to center field.

Perhaps the temperatures are low in the Motor City, but not so in the wood of the Tigre Mayor, who in his third chance receives reliever Chad Greene with an uncatchable to left field.

One step at a time, the time is approaching for Miguel Cabrera to make history again, not only for the Creole irruption in the Major Leagues, but for universal baseball.

.@Miguel Cabrera is on one! pic.twitter.com/3ZGaRoxxHH

The offensive deployment of the slugger seems to motivate his countrymen in the Bengalis. Reyes is 2-3 with RBI, while Harold Castro is 1-3, double and 2 RBIs that match the actions in that sixth inning.

However, the Bronx Mulos do not allow themselves to be overwhelmed and generate high discomfort for Eduardo Rodríguez; in 6 completes they score 3 runs that are clean, including the fourth home run to the account of Anthony Rizzo.

With the game tied at 3, the New Yorkers regained control of the board with an RBI single by Isiah Kiner-Felefa, scoring Tim Locastro; already in the eighth they give definitive figures to the duel when Rizzo doubles and steps on the plate in a selection play that was challenged by the Home team.

Now the Elder Tiger has 2,999 hits, subtracting 1 to match the immortal Roberto Clemente; In the same way he is only 1 double away from completing the 600 in his brilliant career, there are 2 that separate him from Barry Bonds, installed in the 17th position of all time with 601.

Under the lights at Comerica Park!

Miguel Cabrera on fire, sounds three hits and is only one of the 3,000 (+Videos)