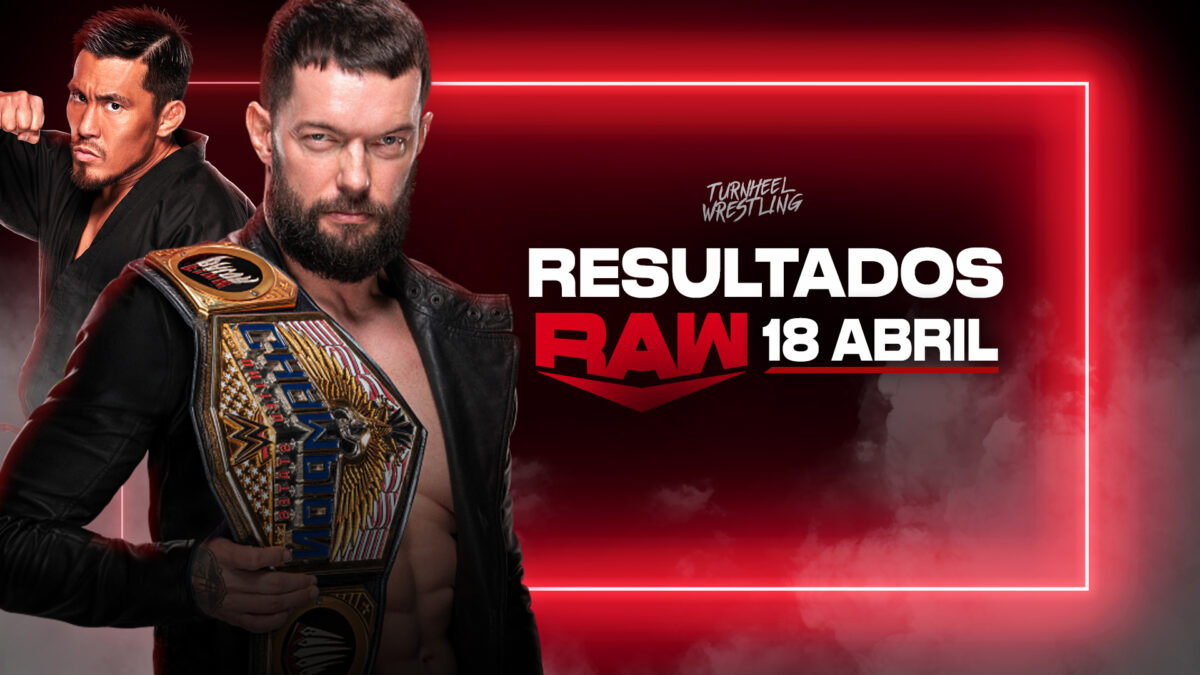 All the results of WWE RAW April 18.

Tonight, WWE celebrates a new RAW show, and this time it will take place from the KeyBank Center in Buffalo, New York. In this program, Finn Bálor will defend the United States Championship against Theory and will do so against The Miz. In addition, Sasha Banks and Naomi will put the Women’s Tag Team Championship up for grabs against Liv Morgan and Rhea Ripley. You can check the complete preview of this episode of the red mark on our website. Next, we leave you the RAW results April 18.

Seth Rollins shows up to kick off Monday Night Raw. Immediately after entering the ring he requests the presence of Cody Rhodes, and he appears. Rollins points out that all the effort Rhodes put in during his time away from WWE is nothing compared to the night of WrestleMania 38, when he made him a star after his match.

Rollins claims that he is better than Rhodes in every way, and that his loss at WrestleMania only happened because he did not know who his rival was going to be. Cody reminds Seth that he was a 4-time World Champion, however, that fact will not change his defeat in the ‘Showcase of the Immortals’. Finally, ‘The Visionary’ asks Cody to fight in the main event of the night against an opponent of his choosing. ‘The American Nightmare’ accepts the proposal.

The first fight of the night will be for the WWE Women’s Tag Team Championships. Sasha Banks and Naomi defend the titles against Liv Morgan and Rhea Ripley.

Sonya Deville makes an appearance on Monday Night Raw. She remembers that she is still a fighter and therefore it should come as no surprise that she is a challenger for the Raw Women’s Championship. She acknowledges that she got herself the challenger spot because she believes Bianca is the best, and she wants to beat someone of that caliber.

Bianca Belair interrupts and threatens to attack Sonya Deville, but she says that if that happens she will get a sanction for attacking a WWE commissioner. Belair then proposes that the fight take place right now on Monday Night Raw, but Deville indicates that it has to be in a place where it hurts Bianca to lose, like in Knoxville, next week.

Bianca tries to land the Kiss of Death on Sonya, but is threatened that she will suspend her if she doesn’t put her down instantly. In the end, Belair releases Deville and leaves.

Veer Mahaan makes his entrance to face a local fighter.

Sonya Deville complains to Adam Pearce about what Bianca Belair did to her. Pearce responds by indicating that the higher ups are evaluating Sonya’s position and that Belair has already been fined. Next, the Raw Women’s Champion shows up to pay her one dollar fine.

Kevin Owens enters to present a new edition of the KO Show with Ezekiel as a special guest. Also, Owens introduces Chad Gable as the one in charge of verifying that Ezekiel is telling the truth on the polygraph.

Chad Gable asks Ezekiel different questions to test the polygraph. He then asks her if he really named her Ezekiel, and if he really is Elijah’s younger brother. His answer is yes, and the machine indicates that he is telling the truth. Owens gets upset and threatens Ezekiel, but ends up leaving the ring. Gable then attacks him and the next fight of the night begins.

RK-Bro make their entrance to face The Street Profits.

Edge is shown alongside Damian Priest. He indicates that no one understands everything they both had to go through and that is why they criticize them. He warns that he will defeat anyone who gets in his way, so he challenges AJ Styles to a rematch at WrestleMania Backlash.

AJ Styles accepts Edge’s challenge for WrestleMania Backlash. Then the lights go out and Edge and Damian Priest appear to attack ‘The Phenomenal’.

The next match will be for the United States Championship. Finn Bálor defends against Theory.

Seth Rollins is asked about Cody Rhodes’ opponent in the main event of the night. Rollins says that he wants Cody to go through the same thing as him at WrestleMania 38, so he won’t reveal who the opponent will be until the match.

R-Truth and various wrestlers from the roster show up for the weddings between Tamina & Akira Tozawa and Dana Brooke & Reggie. R-Truth then asks the couples to read their vows. Dana and Reggie make a speech about how they thought they were going to end up together, while Tamina and Akira say “the same thing”.

R-Truth asks if anyone has an objection before proceeding with the wedding, and Tamina switches partners 3 times before finally returning to Akira’s side. Truth asks the men to put the ring on the women’s fingers and makes the marriage official. Next, Reggie, Tamina and Akira become new 24/7 Champions, until Dana pins the last one mentioned and gets the title again. To finish, the new champion leaves loaded by Truth.

MVP is shown alongside Omos in a pre-recorded video. He remembers that Lashley appeared without him at WrestleMania 38, but states that this is a case of the past, Then Omos challenges him to a pulse challenge for the next week. Bobby accepts the challenge immediately afterward and states that he will win to prove that he is still ‘The All Mighty’.

Cody Rhodes makes his entrance to fight in the main event of Raw. Seth Rollins announces that his opponent will be Kevin Owens.

Thanks for reading our WWE RAW April 18 results, see you tomorrow on NXT 2.0!