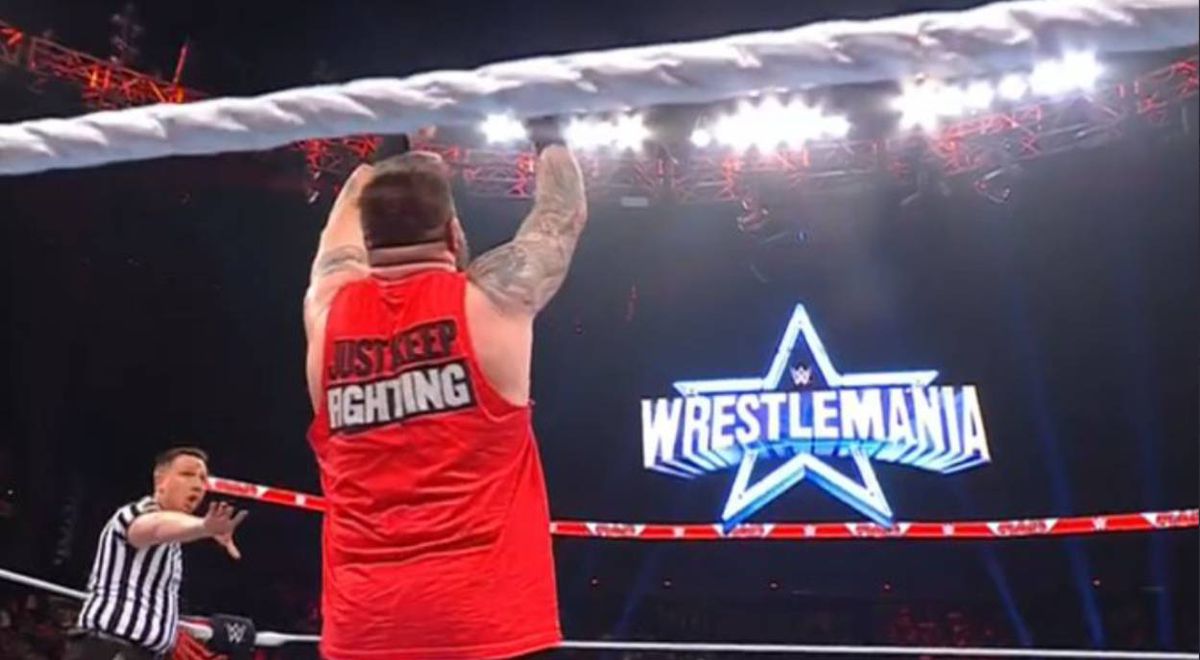 Kevin Owens was the great protagonist of the day, since he had a starting fight against his best friend Seth Rollins. If he KO lost, he gave his place in the Showcase of Immortals to the visionary. However, the Canadian fighter took the victory and will be present at the great event.

On the other hand, RAW tag team champions RK-Bro accepted the title match against The Street Profits at Wrestlemania and will defend their medals on April 3.

In the women’s division, the most outstanding fight was that of Bianca Belair against Doudrop. The RAW champion took the victory but could not celebrate as Becky Lynch appeared to attack her and leave her badly injured.

Finally, Edge addressed the WWE Universe and his rivalry against AJ Styles. The R-rated superstar had words of self-centeredness towards himself and hopes that the Phenomenal One makes it to the match at Wrestlemania.

This is how WWE Raw ends

Final of WWE Monday Night Raw. With a great victory for Kevin Owens and the confirmation of a fight at Wrestlemania 38, the red show of wrestling ends.

Paralyzing Owens and takes the victory

Rollins was looking for the coup de grace but Owens dodges it and applies a paralyzer to him and takes the victory. KO will be at Wrestlemania 38.

Great move by Owens and he almost took the victory.

Super iron and Owens is saved

Rollins iron from the third rope against Owens. KO avoids the miracle count of three.

DDT and almost the count of three

Owens attacks with everything and almost takes the victory with a DDT against Rollins.

Owens stops Rollins in the air and catches him to make a cross suplex against the protection barrier.

Punches and punches to the knee of Rollins

Rollins attacks KO and looking for the count of three. Owens leaves the ring and begins to attack the architect. He hits the visionary’s left knee against the protection that separates the ring from the public.

If Rollins wins, he will replace KO at Wrestlemania and get to interview and/or wrestle Stone Cold.

A great fight is coming!

Next, the fight between Kevin Owens vs. Seth Rollins.

RKO out of nowhere

Montez Ford receives an RKO from Riddle but Alpha Academy appears to attack all the fighters.

Montez Ford super iron against Riddle. He almost reaches the count of three.

Propelling himself up the metal stairs, Montez Ford super lassoes Riddle and drops him to the ground just outside the ring.

Battle between RK-Bro and Street Profits

The fight at Wrestlemania is made official

RK-Bro will defend the tag team titles against The Street Profits.

The Street Proffis comes out to the ring and they mention that they want to challenge RK-Bro at Wrestlemania.

The viper points out that he is grateful to his teammate, and friend, Riddle since he trusted that they could succeed together in WWE. And now they celebrate the Raw tag team title.

Belair applies an inverted spine breaker and wins the match. The fighter was celebrating and Becky Lynch appears to attack the Raw women’s champion.

Doudrop throws Belair against the ring and almost reaches the count of three.

Doudrop’s poorly executed plank and Belair performs an inverted somersault and plank to attack his opponent.

Bianca Belair vs. Doudrop, in the company of Nikki Cross.

“You suck”, responds the WWE universe

The public responds to Edge saying “you are no good”.

Edge begins with a provocative speech

Edge ensures that the best in the WWE industry. He points out that the Edge that returned was weak and looking to please others. He reveals that he doesn’t care about the WWE universe.

The R-rated superstar enters the ring and the public explodes.

Great victory for the Mysterio family

Double 619 for Cedric Alexander. Dominik applies a super plank to Shelton and they win the fight.

Cedric Alexander has Dominik on the ropes

Dominik fights back and takes over from Rey Mysterio.

The Miz interrupts the fight between Rey & Dominik Mysterio vs. The Hurt Business

Miz unexpectedly appears along with Logan Paul to witness the fight between Rey & Dominik Mysterio vs. The Hurt Business.

The Mysterio family match is coming

Owens refuses to help Rollins and says that the idea for a show was his. Even the visionary tells him that they can have a fight and the winner will be in charge of having Stone Cold as a guest at Wrestlemania. KO continues without accepting the proposal.

Seth Rollins begins his speech by revealing that he has an idea to be at Wrestlemania 38.

Liv applies her finish to Zelina and wins the match.

Carmella distracts Liv Morgan and Zelina hits her rival with a spine-breaking bombshell.

Knee to Liv Morgan and almost reached the count of three.

A fight of the women’s division is coming

The duo between Liv Morgan and Rhea Ripley appear in the ring.

Kevin Owens appears along with Seth Rollins. KO assures the architect that he will somehow make it to Wrestlemania and offers his help.

Omos does a double claw against Commander Azees to throw him against the canvas and reaches the count of three.

Omos takes Commander Azees out of the ring

Commander Azees was looking to tackle Omos but he is thrown out.

Omos enters the ring to have a new fight against the WWE universe.

Austin Aries takes advantage of Balor lying in the ring and knees him in the face. He ends with the popular selfie of him.

Balor prepares to apply a finisher but Austin Aries tries to interrupt the fight.

Start the fight between Balor and Priest

Priest makes his entrance to the ring to have a fight against Finn Balor (champion of the United States).

KO enters the stage and will speak to the WWE universe.

Start WWE Raw with the segment between Kevin Owens and Stone Cold.

The WWE Monday Night Raw this Monday, March 14, 2022 promises to have an incredible show. Among the highlights of tonight’s wrestling event card is Kevin Owens’ response to Stone Cold Steve Austin’s words.

In the absence of 19 days of Wrestlemania, KO and the rattlesnake would have a confrontation in the showcase of the immortals.

Likewise, RK-BRO will continue with the celebration of obtaining the titles in pairs of Raw.

On the other hand, the red show this Monday the 14th will continue with the rivalry between Finn Balor (champion of the United States) and Damian Priest. Finally, in the women’s division, it will be known what is next for Rhea Ripley and Liv Morgan after they managed to enter the fight for the Raw women’s tag team titles.