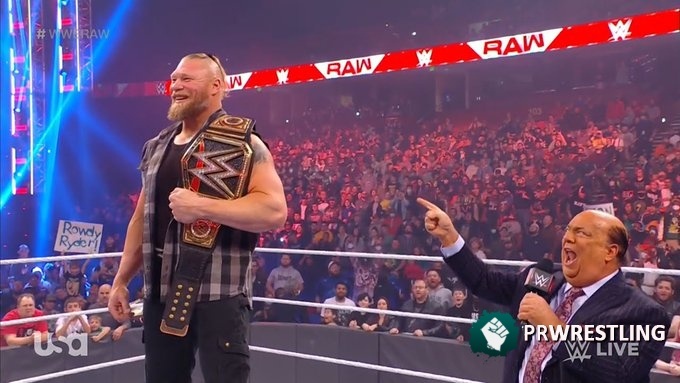 Raw begins with a Brock Lesnar / Paul Heyman segment in the ring.

Lesnar thanked Heyman for moving the chips on Saturday to help him become the new champion. He talked about all of his Da 1 opponents and concluded that Lesnar would remain the champion in the Rumble no matter what.

Becky Lynch comes out and said Liv Morgan broke her promise to fans and herself. Morgan interrupted.

Morgan said Lynch knew how close he came to winning the title on Saturday. Bianca Belair interrupted. Belair claimed he stepped aside to deal with Doudrop and give others a chance, but he was back in line for Lynch’s title.

Belair and Morgan clashed before quickly getting into a fight. Belair was about to give Morgan a KOD but Lynch knocked them down from behind.

Owens approached Rollins from the back. Rollins asked Owens if he should staple Heyman’s lips or rip out his tongue. Owens suggested they work together again tonight, and if they did, they might end up fighting each other for the title.

Doudrop approached Sonya Deville and Adam Pearce. She was angry that Belair and Morgan had opportunities ahead of them again. Deville announced a triple threat between Doudrop, Belair and Morgan next week, and the winner would face Lynch in the Rumble for the title.

Damian Priest defeated Dolph Ziggler to retain the United States Championship in a fight that if he lost by DQ, he lost the championship.
Priest was about to attack Roode with a steel chair, but he walked into the ring so they wouldn’t tell. Ziggler challenged Priest to use the chair on him, but Priest threw it at Roode. Later Priest hits a Reckoning for victory.

Austin Theory approached Vince McMahon in the back. Theory asked about his rematch with Finn Bálor. McMahon said Theory would be in the Rumble and win the main event at WrestleMania.

Miz and Maryse go out. Miz said they were outraged by the result of Dat 1 after he was only one Skull Crushing Finale away from winning. Miz claimed that Edge hid behind his wife.

Beth Phoenix got into her music before Edge got into hers. Edge suggested a mixed fight at the Royal Rumble. Miz agreed, but Maryse wasn’t happy about it. Phoenix scared Maryse with a fake punch and Maryse fell. Maryse stormed off and Miz chased after her.

It will be Lesnar against Lashley at the Rumble.

Patrick walked up to Lesnar behind. Lesnar wanted Reigns to know that he would be on Smackdown on Friday, thus ending the show.